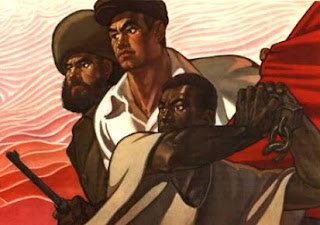 New Citizens = New Politics: Providing it's not simply a front for Natural Dairy NZ, the Chinese-backed company attempting to purchase the Crafar family's dairy farms, the "New Citizens Party" has every chance of becoming a significant factor in the New Zealand electoral equation.
A FORTNIGHT AGO an application to register the "New Citizens Party" was lodged with the Electoral Commission.
A Mr Paul Young, of the Auckland-based firm Asia Marketing and Advertising Consultants, is handling the paperwork, but until the registration process is complete the identity of the new party’s principal backers must remain frustratingly unclear.
Naturally there’s considerable speculation surrounding the nature and purpose of the New Citizens Party (NCP). Some Aucklanders are already linking it to the public relations campaign being waged on behalf of Natural Dairy NZ – the Chinese-backed firm currently seeking Overseas Investment Office permission to purchase the Crafar family’s delinquent dairy farms.
Similar associations have been made in relation to an expensively produced newspaper, United, which began circulating recently in Auckland.
Celebrating the economic and cultural ties linking New Zealand and Asia (especially China) United is obviously supposed to be an antidote to the poisonous outpourings of anti-foreign (especially anti-Chinese) sentiment unleashed by Natural Dairy NZ’s bid to purchase New Zealand farmland.
Absent from both ventures, however, is any sense that the people behind them have much understanding of New Zealand politics.
Nothing is more likely to arouse the suspicion of ordinary Kiwis than a group of unidentified businessmen funding an expensive new publication and/or political organisation. And if it turns out that those unidentified businessmen are acting in the interests of a foreign power? Well, then it’s "Game Over".
Which is not to say that there is no place in New Zealand for a political party dedicated to protecting and advancing the interests of "new citizens".
The immigration policies of successive governments have caused the percentage of foreign-born New Zealanders to rise quite markedly over the past two decades. In 2005, this country's foreign-born residents (excluding Australians) numbered 624,405 or 18 percent of the total population. It will not be many years, say the Statisticians, before the number of New Zealanders whose parents were born in East Asia (China, Taiwan, South Korea) exceeds the entire Maori population.
If it’s possible to make a coherent political case for a Maori Party, then why not a party for recent immigrants?
The first thing such a party must have is someone to lead it.
The NCP leader would need to be a long-time New Zealand resident and a fluent English speaker with a genuine track-record of service to either their own ethnic group, or the wider immigrant community – or both. If at all possible, they would also have to possess what might be called the "Jackie Chan", or even the "Winston Peters" Factor: an ability to inspire affection and trust across the ethnic divide.
That’s a very big ask.
The only people who spring to mind are Associate Professor Manying Ip from the University of Auckland’s School of Asian Studies, and the former Race Relations Conciliator, Gregory Fortuin. (It would be interesting to know if either of them has yet been approached by the NCP’s organisers.)
The next big ask is a policy manifesto that makes sense not only to immigrants – but to "native-born" Kiwis.
My intuition is that such a manifesto would have at its core the vision of a more disciplined, diligent and family-oriented New Zealand.
Interestingly, the man handling the NCP’s application to the Electoral Commission, Mr Young, is completely "on message" in this regard. According to The NZ Herald, he sees the NCP focusing on "community safety, legal and educational issues", as well as having "a particular interest in improving the economy".
Liberal-minded New Zealanders might find the sort of policies advanced by immigrant communities unappealing. They would almost certainly reject, for example, any suggestion that Parliament re-introduce the death penalty for murder, or require criminals found guilty of multiple offences to serve their sentences consecutively rather than concurrently.
But, an NCP which promoted such hard-line policies on "community safety and legal issues" might be surprised at how much "native-born" support it attracted. How could Garth McVicar’s Sensible Sentencing Trust not give such a party the big thumbs-up?
Policies demanding a radical overhaul of the New Zealand education system could likewise strike a chord well beyond the confines of this country’s immigrant communities.
Hell! Throw in a commitment to promote the sort of state-guided capitalism that’s turned China, Singapore, Taiwan and South Korea into such dynamic and successful economies – and even an old lefty like me might start taking an interest in the NCP.
Just steer clear of the Crafars’ farms!
This essay was originally published in The Timaru Herald, The Taranaki Daily News, The Otago Daily Times and The Greymouth Evening Star of Friday, 10 September 2010.
Posted by Chris Trotter at 12:00

Given that the largest immigrant group is the British, could this party come to be dominated by whinging poms?

Not so sure you're right there, Paul. And even if the UK is the country-of-origin of the largest number of immigrants, I'm pretty certain the combined immigration totals from China, Hong Kong and Taiwan would quite easily overwhelm all those "whinging Poms".

No Paul, it won't. They are too lazy.

There is a confusion between two distinct interest groups. The genuine immigrant and the absent landowner.
This is a favourite ploy of the lazy hysterical media which fails to make the obvious distinction....but will cry 'racism' at the earliest chance. Maurice Williamson is no better.

I think Kiwis instinctively sense that the Chinese are new to dairy and do not have a tradition of dairy farming and are likely to be absentee owners, using local managers to take the 'cream' off the operation to fill burgeoning demand in China for pizza toppings.


Europeans are more likely to immigrate to NZ and purchase dairy farms and live and work the family lifestyle.
The English ,Dutch and I know of some Punjabi dairy farmers also. It is no coincidence that these groups also have the lactase persistence gene.....the Chinese not so much.
So it is not racism, it is a realistic understanding of who will make good dairy farmers.

As to disparate immigrant groups having much in common, I am not so sure. Blood will always win out against any immigrant solidarity across racial lines, one only has to observe how immigrant groups congregate in their own suburbs, at least in the first generation.
Most immigrants will vote Labour anyway, as it is the party of largesse.

A party of us whinging poms is the best idea I've heard in a long time.

Just think: someone to champion properly built housing, watchable free-to-air television, half-readable newspapers, affordable groceries and safer driving! You should be so lucky!

'It will not be many years, say the Statisticians, before the number of New Zealanders whose parents were born in East Asia (China, Taiwan, South Korea) exceeds the entire Maori population.'

Is this actually the case? According to the 2006 census there were 560,000 Maori and 350,000 Asians in New Zealand. With Maori birth rates being relatively high and immigration proceeding at a modest pace, I can't see how Asians as a whole could overtake Maori, let alone a subcategory of Asians.

Meng Foon, the mayor of Gisborne, is not an immigrant, but he is an example of a leader of Chinese descent who has won support from an electorate dominated by Maori and Pakeha. He pops up on Maori television speaking te reo with a beautiful accent!

On the face of it, Scott, that does appear to be a very large gap to bridge.

There are, of course, the usual arguments about how "Maori-ness" is defined these days - but let's not go there.

Perhaps the gap will be closed simply by New Zealand's immigration policies relating to family reconstitution.

If a significant number of the families of Asian immigrants join their relatives here it's easy to see how very quickly the proportion of Asian New Zealanders could grow.

Is it not more likely that NZ will 'brown' ie increase its pacific population, and who knows maybe we will like South America - have an Indigenous President/Prime Minister one day.

If America can have a black man, and Bolivia an indigenous president, and Iceland a woman, then is it nearly time for Aotearoa to have a Maori president/Prime Minister?

We are in asia pacific, not europe - so it does make some sense for us to have a asian and pacific population, along with other migrants (european etc).

What is the alternative plan if New Zealand doesnt not want to be a foreign owned dairy giant? NZ wants to sell lots of dairy to Asia, and some of Asia wants in on that, via owning dairy here... Were we do move in a more sustainable direction would we want to instead sell renewable energy and cleantech to Asia and elsewhere?

I wonder if New Zealanders can own land in China,or buy a business that is not at least partially locally owned, or set up a political party there with the emphasis on self -reliance and individual rights? Or even immigrate there?
No I didn't think so.
FF

'What is the alternative plan if New Zealand doesnt not want to be a foreign owned dairy giant?'

We invest our super funds overseas, (which is a way of saying we believe more in others' ability to make money, not so our own).... yet we can't raise capital here to buy our own food producing assets that the world is desperate for!

The stupid banks should never have lent Crafar so much money in the first place, but we are talking about real assets here, not some coastal subdivision or dodgy bar in the viaduct which is where we seem to put our money.

With better management and a bit of vision Landcorp would been one option to pursue,at least until the farms could have been sold back to genuine Kiwi farmers.

I am discovering this post somewhat late, after reading of the New Citizen Party's Paul Young coming third in the Botany by-election.

If they stand for tradition Asian standards of excellence then I might vote for them myself.