Plots In The Palace 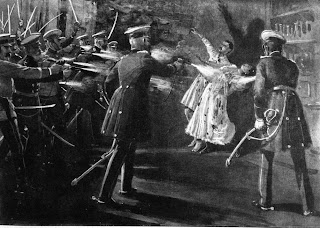 End Game: Maori Party co-leaders Tariana Turia and Pita Sharples had better watch their backs or like the unfortunate King Alexander I of Serbia and Queen Draga they may end up on the receiving end of a palace coup. In the hothouse atmosphere of nationalist politics, to be on the Right's side at the Left's time can have fatal political consequences.
IF THE KING had closed the door to the secret chamber more tightly, he and his Queen might have survived. On that terrible night, however, it was the barely discernible gap between the door and the smooth wall of the royal couple’s bedchamber that betrayed their bolt hole’s whereabouts to the assassins.
The brutality of the murder of King Alexander I of Serbia and his wife, Queen Draga, in Belgrade’s Konak palace in the early hours of 11 June 1903 horrified the whole world. To Serbia’s radical nationalists, however, it was simply a political necessity.
In their eyes, the King had committed the fatal error of aligning Serbia with the German-speaking, Catholic rulers of the Austro-Hungarian Empire. As proud Slavs and Greek Orthodox Christians, the young firebrands of the Serbian army looked to Russia as the guarantor of their nationalist objectives. Only with the Russian Tsar’s backing could their dream of a Serb-led "South Slav" kingdom – Yugoslavia – be realised.
For Yugoslavia to be born, the King and Queen had to die.

THOUGH IT’S UNLIKELY to be as bloody as the overthrow of the ill-starred Obrenović dynasty, a similar coup may be brewing in the Maori Party – and for broadly similar reasons.
In essence, the Maori Party is a manifestation of what the political scientists call "brokerage politics". In the words of Dr Elizabeth Rata, brokerage politics is "a pragmatic mechanism that … enables minority groups to achieve political recognition despite their limited voting power."
To remain effective, however, a brokerage party must deliver the goods to the minority for whom it is acting. A broker who returns nothing to his clients will very soon have none.
When the Maori Party threw in its lot with National it must have known that the only goods on offer would be symbolic ones. To deliver practical assistance to Maori Party voters (located overwhelmingly on the lower rungs of the socio-economic ladder) National would have had to embrace a redistributive programme utterly unacceptable to its own supporters.
Symbolism was, however, considerably better than nothing at all. Besides, Tariana Turia’s deep loathing of the Labour Party, and the strong political relationship which soon developed between Dr Pita Sharples and John Key emotionally predisposed the Maori Party leadership to accept National’s offer of partnership.The Maori Party’s electoral base cannot, of course, live by symbolism alone. Already demands are being voiced for tangible delivery in education, health, housing and – most crucially – employment. And, by 2011 even National’s symbolic concessions will have gone as far (perhaps further) as its conservative supporters will tolerate. As a brokerage partner it will be all tapped-out.
The logical next step for the Maori Party, therefore, is to broker a deal with Labour. In a party of the Centre-Left the sort of redistributive policies required to uplift Maori New Zealanders would be a much more comfortable fit. (And if they implemented them under the guise of the National Party-endorsed "Whanau Ora" programme, the Centre-Right could offer no credible objections.)
Even on the symbolic front, a deal with Labour makes sense. On current polling, Labour couldn’t hope to form a government without Green Party support. And since the Greens are even more fervent upholders of tino rangatiratanga than the Maori Party, the brokerage opportunities inherent in a Labour-Green-Maori Party coalition are immense.
That just leaves the problem of Queen Tariana and King Pita.
Like the unfortunate Obrenovićs, the Maori Party’s current leaders have aligned themselves with the wrong people. The dream of sovereignty now requires a change of direction and a shift of allegiances – moves that cannot be made by leaders who are allergic to Labour and/or best mates with Mr Key.
The evidence of palace plotting is everywhere (if you know where to look). In last weekend’s Sunday Star-Times, Hone Harawira announced that he was ditching his vituperative verbal radicalism in favour of a more moderate style of political communication. Rumour’s whisper of a high-profile Maori politician preparing to challenge Dr Sharples in Tamaki Makaurau.
And if you would know from which political quarter these winds of change are blowing, just make your way to the 2010 Bruce Jesson Lecture at Auckland University on 27 October.
This year’s speaker is Maori lawyer and activist Annette Sykes, and her address, "The Politics of the Brown Table", issues a powerful challenge to: "A self-anointed Iwi Leaders Group, a Maori Party that supports a National/Act government, and a group of Crown mandated intermediaries drawn from retired politicians and bureaucrats".
According to Ms Sykes, these "agents for the manufacturing of consent and the management of discontent among Maori" are guilty of "harnessing Maori to a global capitalism that impoverishes the mass of working-class Maori and [is] making them dependent on its survival."
Ms Turia and Dr Sharples would be wise to keep their doors shut tight.
This essay was originally published in The Press of Tuesday, 28 September 2010.
Posted by Chris Trotter at 11:49

See, when you're not blinded by the red mist of nationalist fear and loathing, you can make sense on these issues after all!

Why would Labour redistribute specifically to Maori, when they haven't in the past, and after the Goff Nationhood speech?