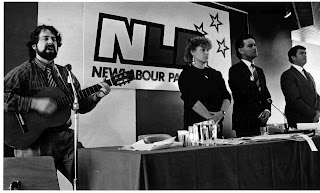 Been There - Done That: The launch of the NewLabour Party in 1989 was derailed by the antics of the Far-Left. Twenty-two years later, and those contemplating the formation of yet another "New Left Party" (like Sue Bradford and Matt McCarten who were there, as I was, at the birth of the NLP) will find themselves with very little, apart from the Far-Left, to work with. The New Zealand electorate is unlikely to respond kindly.
A NEW LEFT PARTY – hardly are those words out when a dispiriting image out of the late-1980s troubles my sight: somewhere (I seem to recall it was the Overseas Terminal in Wellington) a queue of youthful extremists, their gaze blank and pitiless as the sun, are shuffling their sneakers inexorably towards the microphone, while all around them reel indignant social-democrats – recalling, too late, W. B Yeats warning about the worst being full of passionate intensity.
The Inaugural Conference of the NewLabour Party on Queen’s Birthday weekend, 1989, should have been a triumph. Deploying all of the organisational flair for which he was famous, Jim Anderton had gathered together around five hundred eager refugees from the pod-party Labour had become under Rogernomics. An overwhelming majority of those attending the conference were ordinary Kiwis: workers, students, beneficiaries and pensioners – with a smattering of academics and trade unionists.
I wasn’t worried about them. When they spoke I was confident they would put into words the feelings of outrage and betrayal shared by hundreds-of-thousands of their fellow citizens.
No, the people I worried about (and I was not alone) were the fifty-to-sixty Trotskyites, Maoists, "Permanent Revolutionaries", Treaty fanatics, hard-core feminists and uncompromising environmentalists who would climb aboard this new political vehicle like Baader-Meinhof terrorists boarding a jet-liner.
We tried to warn Jim, but he simply couldn’t see the problem. "Don’t worry," he said, "we’ll outnumber them ten-to-one." What Jim didn’t seem to grasp was how much damage fifty-to-sixty fanatics could do to the public’s perception of his nascent political movement.
And, oh, what a lot of damage they did. In the days following Jim’s announcement of the NLP’s birth, on 1 May 1989, opinion polls showed support levels around ten percent. In the weeks following the hi-jacked Inaugural Conference public support plummeted below three percent.
"Ah, but that was more than twenty years ago," I hear you say, "times have changed".
Indeed they have.
In 2011, New Zealand is governed by a right-wing coalition supported by close to 60 percent of the electorate. The dominant partner in that coalition, the John Key-led National Party, has been supported by more than 50 percent of the voters for two straight years.
Does this sound like the right time to launch a New Left Party to you?
Who would join it?
Not the moderate, social-democratic Left: they have all returned to the Labour Party. Not the moderate, environmentalist Left: they have the Green Party.
This is important – and not only because, between them, Labour and the Greens account for practically all of the Centre-Left vote. They also account for 99 percent of those who have the slightest idea about how to run an effective election campaign.
A crucial element in the success of Jim Anderton (ex-Labour) and Winston Peters (ex-National) was the large number of experienced election campaigners who rallied to their side. These people didn’t have to be taught how to fund-raise, organise a canvassing drive, or run an election-day system – they already knew.
"No worries," say the promoters of a New Left Party, "we’ll just game the MMP system by recruiting Hone Harawira. That way we can avoid the necessity of winning 5 percent of the Party Vote. If it’s good enough for Rodney Hide in Epsom – it’s good enough for us."
Hmmmm? Not sure that’s the slogan you’re looking for, Comrades. Besides, if you really think an electorally poisonous bunch of eco-anarchists, Maori nationalists, unreconstructed ‘80s feminists and hard-core Marxist-Leninists are going to attract anything like Act’s vote in 2008 – then you’re away with the fairies.
Just consider the stats: The combined 2008 vote of New Zealand’s Centre-Left parties (Labour Party, Greens, Progressives) was 975,734 or 41.62 percent of the Party Vote. Altogether, the Far-Left parties (Alliance, Workers Party, RAM – Residents Action Movement) attracted just 3,306 votes or 0.14 percent.
It’s nowhere near enough, Comrades. Even if he won every vote in Te Tai Tokerau, Hone would still be on his own.
This essay was originally published in The Dominion Post, The Timaru Herald, The Taranaki Daily News, The Otago Daily Times and The Greymouth Star of Friday, 4 February 2011.
Posted by Chris Trotter at 10:22

I could imagine a New Left Party getting in on opposition to Free Trade and a Green Jobs program for full employment in Aotearoa.

Essentially a social justice and environment position, that takes elements of the best parts of union, local sovereignty and environmental viewpoints and traditions. http://www.nznotforsale.org/ points out what the effects of more Free Trade would be to New Zealand

Free Trade is a difficult issue for labour, but it is not for a New Left Party that is anti neoliberal, in more than rhetoric, and has a plan to rebuild the economy in a matter that is just and sustainable.

Bill Logan versus the ordinary decent kiwis.
No contest one would think. Except somehow Bad Bill and the brats spoiled everything. Chris you do self pity so well.

That a handful of people attempted to free-ride on the efforts of others in an attempt to acquire a measure of political influence which they would never have been able to exercise under their own ideological banner.

To top it all off, when confronted with the evidence of his own entryist intentions, Bill Logan pretended not to know what entryism was.

Mr Ttrotter, it's is a pleasure to read some common sense analysis of MMP and the ratbag from Up North.

Mr Trotter, the ONLY flaw in this otherwise excellent article (of which I would never normally read) is: New Zealand is governed by a right-wing coalition supported by close to 60 percent of the electorate.

Key is as socialist as the come. National have become, arguably, more left than labour as they have succeeded in implementing more empoverishing leglislation than labour ever did.

Would Chris Carter stand under this banner?

Even if he lost,he would collect three months redundancy salary as a defeated incumbent. $35,000 odd dollars - not to be sneezed at.

Fact. The great new - lets all roll up our sleeves and get together to build a better world - Alliance. was not quite big enough to assimilate Bill and his two or three mates. Those few little irritants had to be squashed like a bug on a window so as not to spoil the brave new world party.
Now the Alliance is about the same size as the PRG and equally damned by Chris Trotter as a far left threat. Help! Winston is starting to look sane.

Freed from Jim Anderton's conservative embrace, the Alliance pirouetted gaily across the political stage to take up a new position in the area marked "Socialist - and proud of it!"

Good on them. Just so long as they don't mind polling figures with a zero in front of them.

Chris, a very well written article. But the comment above is right, the right is not supported by 60% of the population. The combined National, ACT and United Future party votes were still under 50% last election. The reason why the hold a large majority in terms of seats is flaws in MMP with wasted New Zealand first votes that were intended to prop up a Labour government, as well as other vote splitting factors such as the Pacific party and together arguably cost the centre-left up to 7 seats.

Chris, just one question from me about this very wise post. Excuse my ignorance, but are you that dashing young turk with the guitar?

'Tis I, Lew. Though it's hard to believe I was ever that slim - or had that much hair!

Thanks Lew, someone had to ask! Chris, interesting read which helps put issues into perspective.

Did anyone see Hooton's writeup in the NBR this week. Apparently he names Bomber as a prime instigator in the formation of this new left party.

No wonder Mr Bradbury actually dedicated a post to rebutting your rather derision opinion of his new party.

Although once again Bomber has committed the sin of offering his 'opinion' on something that he has a direct interest in. Surely he would have learned after being outed for his contract work with Mr Hooton.

What was most interesting about that poll was the fact that only around less than half of the voters were querried after Key announced the privatisation plan. National might have dropped far more than that poll suggests.

The fact that "Altogether, the Far-Left parties (Alliance, Workers Party, RAM – Residents Action Movement) attracted just 3,306 votes or 0.14 percent." does not mean that a new left party would receive that much, it just reflects the fact that people don't want to waste their vote. If, for instance, Hone was a part of such a party people would know they were not wasting their vote and you would see far greater than 0.14%.

You just need to look at thestandard.org.nz to see there is a lot of support for a new left party from people who would otherwise vote/be involved with labour/greens: people who are not 'far left'.

A new left party would start to bring the centre to the left, and re invigourate left wing discourse, including a public discourse on privatisation, neoliberalism and free trade.

Labour would be pushed into taking a position on free trade.