Vesting Day (In Praise of Nationalisation) 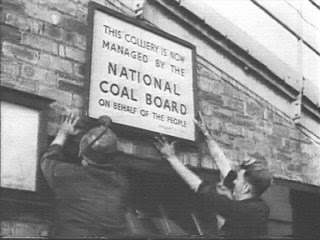 On Behalf of the People: With the privatisation of state assets back in the headlines, it is useful to recall why privately owned industries were nationalised in the first place.
IT’S ONE OF THOSE PHOTOGRAPHS that capture history in the making. Taken by a proud mineworker on 1st January 1947, it records the erection of a large wooden sign outside the gates of a grim and grimy British coal mine. The sign says: "This Colliery is now managed by the National Coal Board on behalf of the People."
Thousands of miners’ lives had been lost to lung disease, gas explosions and cave-ins. The miners’ unions had been forced to engage in some of the most prolonged and bitterly contested industrial conflicts in British history. But at last, after a century-and-a-half of constant struggle, "Vesting Day" – when the proprietary interest in Britain’s coal industry was prised from the fingers of its private owners and vested in public hands – had dawned.
At the little colliery of Berry Hill, near Fenton, in Staffordshire, a group of miners posed for a formal "Vesting Day" photograph. The broad grins beneath the cloth caps bear testimony to the enormous hopes working people all over the world had invested in the nationalisation programmes of their Socialist and Labour parties.
Just a year earlier, and half a world away from Fenton, five thousand trade unionists had marched through the streets of Wellington in support of the New Zealand Labour Party’s long-delayed promise to fully nationalise the Bank of New Zealand. Many of the marchers wanted to go further. They had only to glance at their party membership card to be reminded that Labour’s succinctly formulated political objective was "the socialisation of the means of production, distribution and exchange".
But what did that mean? What was nationalisation/socialisation supposed to achieve?
At the most basic level it was intended to lift the burden of private ownership from the shoulders of the men and women who laboured in its service. Returning a healthy dividend to their shareholders all-too-often obliged private industrialists to extract more effort from their employees for less reward. Health and safety considerations were similarly subordinated to the owners’ over-riding imperative to increase the rate of return on capital. Public ownership was – at the very least – intended to construct a solid floor under the workers’ wages and conditions.
But that was just the beginning. The workers in nationalised industries also hoped to play a central role in their management. To "socialise" production was to break down the artificial hierarchies separating those who made the decisions from those who carried them out.
Socialisation was also intended to broaden radically the definition of who held a legitimate interest in the nation’s mines, factories, warehouses, shops and offices. "Stakeholders" in these enterprises were said to include not only the workers, their families, and the local community, but also those who worked in the civic, cultural and agricultural infrastructure which sustained them.
Nationalisation would thus allow democracy, hitherto reserved for the ballot-box, to flow inexorably into the workplace, where, the socialists insisted, it has always been needed most.
The historical experience of nationalisation fell well short of the millenarian hopes of the 1940s. Only the most basic expectations of the process were fulfilled. Because, although the State generally proved to be a better employer than the private capitalist, it opted to run the nationalised industries in exactly the same fashion. The strict division between "the bosses" and "the workers" endured, and the latter’s vast store of knowledge about the enterprise’s operations remained as under-utilised in the state-owned industries as it did in the private sector.
In New Zealand, the nationalised industries did acquire an unintended – but important – social dimension by being used by successive governments to absorb large numbers of workers who would otherwise have found themselves unemployed. By soaking-up this surplus labour, the State protected New Zealand society from the manifold curses of mass unemployment: domestic violence; child abuse; family break-up; juvenile delinquency, alcohol and drug addiction, and rising crime-rates.
The great post-war wave of nationalisations was finally broken by the countervailing force of the neoliberal revolution. By the late 1980s, in New Zealand, all publicly-owned entities had been forced to abandon their fiscally unsustainable "social" functions and become profit-making "State Owned Enterprises". Operated as if they were privately-owned business, the new SOEs were required by the Treasury to deliver market-determined rates-of-return to their "share-holding ministers". All of the state-owned banks and insurance companies; the nationalised telecommunications sector; the state airline; and the publicly-owned railways were privatised.
The neoliberal justification for privatising state-owned industries has always been that the private sector, on balance, is more productive. That being the case, it makes more sense to cash them up and use the proceeds to retire government debt.
The miners photographed outside Berry Hill Colliery in 1947 would probably agree. Collective exploitation is clearly a contradiction in terms. Fairness seldom turns a profit. And the coal-master’s girth was always inversely proportional to their own.
This essay was originally published in The Press of Tuesday, 1 February 2011.
Posted by Chris Trotter at 15:48

While New Zealander's were concerned for the lives of trapped miners.. a mining giant was planning its moves:

"We had hoped to make announcements in the new year, but the [three New Zealand] visits by Qinghua have been attracting attention," said Mr Lancaster, whose company directors include brother Michael and son Jolian.

Mr Lancaster said meetings were being sought through the offices of Prime Minister John Key and Energy and Resources Minister Gerry Brownlee, but the Pike River disaster had prompted deferral of meetings "for several weeks"

Chartered flights across the South Island have included meeting several southern mayors and visits to mine sites, Mr Lancaster said.

The company has plans to set up in New Zealand and become twice the size of mining SOE Solid Energy, which is currently being talked about as a company for sale...

Now who might want to buy New Zealand farms and energy companies...

Rose coloured view of the past indeed.

Those three little dots of yours speak volumes, Libertyscott.

The part of the sentence you've elided - "of mass unemployment" - quite radically alters the meaning you're attempting to force upon my words.

Of course there was domestic violence and child abuse in the 1960s and 70s - just as there is today. My argument, however, is that the nationalised industries, by maintaining full employment, dramatically reduced its incidence.

John Minto has produced evidence which shows that prior to the corporatisation/privatisation of the Forest Service, the Post Office and the Railways (massive employers of unskilled and semi-skilled labour) the incidence of child abuse among Pakeha and Maori was roughly the same. With the end of nationalisation, which saw thousands of Maori workers lose their jobs, the incidence of child abuse in Maori communities soared.

The same is true of practically all of the other social indicators of entrenched joblessness and poverty.

I strongly suspect, Libertyscott, that your rose-coloured spectacles are reserved for the present.

So the blackmail treat is, if I dont have a job I will give my kids the bash.

Say a lot of the people making up excuses.

It is a pity that the private enterprise shown at the railway workshops during my time there (when more light road trailers for private sale went out the door then railway wagons) has not carried on by the workers into the private self employment.

They certainly knew how to build good stuff, just not all was for the benefit of the state employer.

No rational private organisation would employ these people who worked more for themselves than the employer.

Glory days they never were or in Bruce Springsteen words

Second last line is the catcher

Of course, the factory that Bruce Springsteen's character worked in (being American) was almost certainly privately owned.

And how extraordinary for any sane person to suppose that child abuse is some form of rational utility maximisation strategy.

If your pseudonym "Gerrit" is short for "Get it?", well, I'm afraid you don't.

I wonder what a full employment plan would look like now. I know unions in the US have had green jobs conferences http://www.greenjobsconference.org/agenda/2011

The jobs summit that happened in New Zealand was a real dud. National seems to have ran out of ideas a long time ago.

The Greens started their green new deal package, what else is on offer or is that the best there is and in need of expansion and implementation?

I do not need to hide behind a pseudonym.

Have made the comment here before, the cloth cap union movement is dead, it is never coming back and those who dream for the glory days to return dont "get it".

This offers no explanation as to why it is that predominantly men abuse children and not women, when women are equally if not more affected by joblessness and poverty than men.

It would prove interesting to see the levels of child abuse that existed in the 1930's when NZ last went through a major depression. I suspect it would be a fraction of what happens today. Why? Because a different cultural, Judeo Christian ethic pervaded within the people of our country, Maori included.

The abuse of a child is nothing less than moral failure on behalf of the abuser, be they employed (as many are) or unemployed.

While joblessness and the frustration that accompanies it may be a contributing factor, it is not causal. Millions of people throughout the world live in abject poverty, much more severe than we might experience in 'welfare New Zealand' and they are not all child abusers.

There are two problems with the causal suggestion. The first is that it leads to the naive belief that solving the economic problem will alleviate the problem of child abuse, and second it allows the abuser to be 'absolved' from the responsibility of their actions.

"Hey, I'm unemployed and poor. So I beat my kids, what do you expect from me?"

We cannot address a problem until we correctly acknowledge the cause.