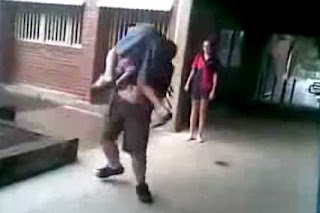 Tangible Justice: Casey Heyne's lifts his assailant into the air prior to bringing him down to earth - hard. All over the world people thrilled to this simple demonstration of the biblical injunction: "as ye sow, so shall ye reap". Sometimes (with all due respect to the Carpenter of Nazareth) "turning the other cheek" only makes things worse - just ask the Libyans.

GOOD ON YOU Casey Heynes! The video recording of this young Australian lifting up the school-yard bully who attacked him and body-slamming him hard into the concrete has gone viral. Few would dispute that the global affirmation flowing Casey’s way is well-deserved. To most people, the kid’s a bloody hero.

But not to the principal of Casey’s high school. His response was to suspend not only the perpetrator who started the fight, but the victim who finished it.

Would New Zealand’s school principals have done the same? Well, yes, they probably would.

When confronted with the YouTube clip of Casey’s body-slam the profession emitted a confused murmur of “yes, buts” and “tut-tuts”.

The equivocation of Kelston Boys High School’s assistant principal, Robert Solomone, was, sadly, typical. First he applauded Casey for fighting back: “as a parent as well, I’d want my boy to stand up to any kind of bullying”. Then he back-tracked: “but it’s still unacceptable”. Kelston’s policy is one of zero tolerance for any violence.

“Nine times out of ten”, Mr Solomone told The NZ Herald, “we tend to suspend as well.”

No doubt our principals have good reasons for responding to the emotional and/or physical abuse of their pupils by punishing both perpetrators and victims – but I’m buggered if I can fathom them.

I’d also like to think that any school I led would also have a policy of affirming and celebrating those who resist injustice; who fight oppression; who stand up for their classmates and take on the bullies.

What would the likes of Mr Solomone say to the students of New Zealand’s secondary schools about what’s going on right now in Libya?

Would he be telling them that what the United States, France and the United Kingdom are currently doing to give effect to the United Nations’ Security Council Resolution on Libya is wrong? Or, worse still, would he saying: “If I was a Libyan democrat right now I’d be urging on those American cruise missiles. I’d be cheering the arrival of those French Mirage jet fighters. I’d be so thrilled that the world was willing to stand up to the tyranny of Muhamar Kadafi. Oh, but don’t forget kids, violence is still unacceptable.”

Personally, I can’t think of any strategy less likely to build trust and confidence in authority among young New Zealanders. How much respect can these kids be expected to show for a system which speaks out of both sides of its mouth at the same time?

And it’s not even as if what they’re telling our children is correct. The law of the land makes it very clear that the use of “reasonable force” in defence of your own person, or to prevent others being harmed, is perfectly acceptable.

What is reasonable force? Well, what a jury considers reasonable is usually determined by the circumstances.

Casey was the victim of an unprovoked physical assault. Believing his prey to be incapable of retaliation the bully came up to Casey and punched him hard in the face. He continued the assault until Casey simply picked him up and threw him down – hard – on the concrete.

I defy any jury in either Australia or New Zealand to find that Casey’s use of force against his assailant was unreasonable. Like the hundreds of thousands of people who’ve watched the incident on YouTube, I’m absolutely sure that the ladies and gentlemen of that jury would be equally thrilled by the sudden reversal of the bully’s fortunes.

If justice is a phenomenon that can be experienced as a physical sensation, then it’s justice that we feel as Casey puts his assailant down.

Neither the students they teach, nor the society in which they live, are well-served by principals and teachers who deny the raw experience of natural justice to the young people in their care.

Justice isn’t something you can accomplish with words – bullies don’t heed words.

Justice cries out for deeds.

If you doubt that – then go ask the Libyans.

This essay was originally published in The Timaru Herald, The Taranaki Daily News, The Otago Daily Times and The Greymouth Star of Friday, 25 March 2011.
Posted by Chris Trotter at 14:34

I e-mailed the school about the nature of the punishment to both students.

One of the best ways for bullying to be stopped is for non-involved students to intervene (as happened at the end of this incident when the girl intervened to stop the bully's partner attacking Casey). By punishing the good and the bad you stop kids from intervening for fear they will get caught up in the punishment.

I completely agree with you Chris. The school should stand up for a kids right to defend themselves.

If I were advising Casey my response to suspension would be to sue for about $10m for failing to protect him from assault.

Society (officially) has the same attitude to crime (in general).We are bullied by criminals but the situation has become normalised; we just ring our hands.

Civic courage is the highest of social virtues and educating for it starts in the school yard.

I suspect we'd have fewer bullies in adult society, including the work place, if they were called to account earlier in life.

Victor, it may well be that those bullied at schools go on in adult life to exercise any power or authority they wield with a chip on their shoulder. The victim that stands up to his tormenter and whacks them on the snout is therefore doing society a double favour.

In my experience, bullies are always cowards, they do things because they can. There are no consequences to their actions. As soon as there's retribution in kind, they stop.

The hand wringing 'experts' have got it wrong. Again.

I don't disagree with you.

The only caveat I would make to this discourse is that physical force should be the last and not the first resort, albeit that, in the schoolyard context, the last resort normally arrives pretty quickly. Certainly it did in my day.

As a primary school teacher I have big problems with 'an eye for an eye', and for the life of me I don't get the benefit of making a big deal out of this type of thing as the media is wont to do. Especially since in the last few days on TV1 I have seen firstly, a lengthy piece on Close Up about parents maybe signing some sort of contract to prevent them fighting on the sidelines of their kids sports games. The presenter was full of tsk tsk type sounds about naughty adults having a poor influence on their children.
On the other hand, now we are seeing news readers chuckling in a matey 'jolly good on them' style, about several of the Black Caps being fined for hassling their opposition.
Isnt this just the same sort of bullying they are expressing shock horror about, except it's by adults? Are they allowed to act like that if they are representing the country?
Complete mystery.

"Isnt this just the same sort of bullying they are expressing shock horror about, except it's by adults? Are they allowed to act like that if they are representing the country?"

in that case they are well honed and matched to each other.

In the case of kids at school if they are bullied they may internalise that lesson. There is an experiment with mice: somehow they fix the first fight and the results show that a defeated mouse goes on to loose (has learned that) whereas if it wins it gives its best subsequently.