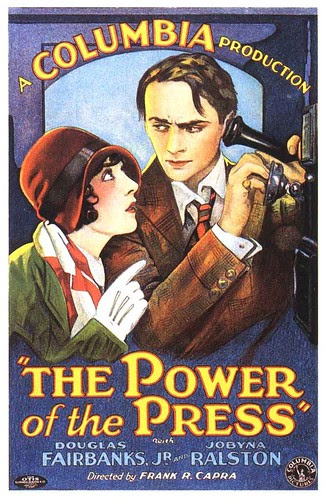 While hardly a representative example, Chris, this is an apposite and important one. I'll make no defence of the media for their handling (or, to a great extent, non-handling) of the Arie Smith case, and in other respects they've also been less than stellar -- such as in failing to report the human impacts of the quake in the less-affluent and worst-hit areas of Christchurch's east. In those cases they have been largely guilty of acting as an echo-chamber for the accepted elite narratives, rather than an independent voice of their own. My thesis was never that the media always fulfil their role fairly and justly, after all -- there are many factors which can prevent this, threats from power not least among them. Only that that's what the role is, and while it performs some valuable service, it does comes at a cost of some exploitation.

No doubt a bunch of people will be along to tell you how quaint your insistence on "truth" is. After all, there are apparently many "truths" according to the miseducation being peddled in philosophically illiterate social science departments since the 80s.

You can't use logic against people who only believe in rhetoric, Chris.

Chris, sorry for the OT, but a bit worrying to see you as a guest poster on Muriel Newman's crazy racist site:

It has long been my policy to grant permission to any person or organisation seeking to re-publish material already in the public domain.

The column in question was published for everyone to read in The Press of 15/2/11.

At least the Coastal Coalition asked for my permission, and acknowledged the original publisher - which doesn't always happen.

Had they asked me to write a piece exclusively for them, you may be sure that I would have refused.

I have also noticed a tendency for RNZ business reporters to seek most of their "expert opinions" on economic matters from economists with large banks and financial-type corporates like Goldman Sachs, Merril Lynch etc. It is staggering such people (& firms) are so blithely trusted by journalists after the financial crisis.

Like you say, Chris, only occasionally does one hear an alternative voice like an academic or trade-union economist.

For some reason, it also bugs me how those RNZ business journalists come across like sports reporters, if you know what I mean, jocular and matey matey.

As soon as the media decides to be a "player" instead of a dispassionate observer, we're in trouble. This is why the Winston Peters phenomenon (in which they now have a vested interested, having failed utterly to "get" him, when such a "getting" was egregious in the first place) vexes them so sorely.

"Why doesn’t the news media approach an academic economist for this sort of commentary? Someone whose salary depends upon the rigor of their critical thinking – not the profits of their employer? Someone, in short, without a dog in the fight?"

The truth is, everyone including the 'academic economist' has a 'dog in the fight'. They are employed by the State, their tenure is dependent upon the on-going approval of the institution to which they belong, which in turn will have vested interests.

There is no 'neutral ground' no truly independent observer, no 'values free' commentary.

The best we can hope for is that people disclose their predisposition, their world view, their underlying values. Then we can hope to asses their views against the bias of their filters.

The real lie is that human objectivity exists.

Chris, on the question of whether the media should choose bank or academic economists, isn't it an empirical question? That is: which economists have been more accurate over the years in making forecasts about the New Zealand economy? I bet (although I have no data) that it’s the bank economists because if they have “a dog in the fight” as you put it, isn’t it that they get it right? In contrast, the academic economists tend to have tenure and are often ideologically motivated. Ideological battles is what academics do. If an academic economist predicts that the dollar will go up, or whatever, isn’t it likely that’s because that’s what their ideology demands should happen in the particular case? To trust an academic economist over a commercial one is, in my view, an incredible leap of faith – even an ideological one.

Mr Trotter, it is always a pleasure to read your ramblings, even when I disagree strongly with their various themes. You are a bit like the Bible. (Now don't go rushing off for some tablets of stone and a chisel.)There are those who take your words literally and there are others (like me) who look for the subtle message behind the words.

Today, I think you have delivered a sound kick up the arse to both journalists and jurists.

Surely we should be getting a variety of viewpoints, including those of academics of both left and right wing persuasions, along with those of the, no doubt, subconsciously biased commercial economists.

If it's indeed true that commercial economists get it right more often than others, this could be because the constant Pavlovian reiteration of their neo-liberal mantras helps sustain a cultural and business climate that, at least in the short term, favours the outcomes they tend to predict.

In the long term, however, their record is pretty dismal, as the current state of the global economy testifies.

I'm glad that Hooton thinks that all that economists should do is forecast the economy, in other words number crunching. And number crunching was supposed to empirical, with no assumptions or value judgments built into the modelling?

A better question for him would be why it is of value to have the commentary dominated by employees of foreign financial institutions, and the central bank prescribing to the same views. Since the Treasury is also a right wing think tank, there is uniformity. So how about some constestability. Saying that only the academic economists are ideological, with the commercial economists being pragmatic, is itself ideological.

In truth, it was only for a short time that academic economists opposed the Treasury line, and that was in the mid 1980s. That was based at Victoria, which has since become as right wing as the rest; the only exceptions are individuals in provincial business schools. Even when all the relevant academic economists opposed monetary policy, as they did in December 1988, it did not do much good. Treasury and their acolytes simply manoeuvred their opponents out of any positions of influence outside the academy. They also helped create think tanks like the Institute of Policy Studies at Victoria, which was a haven for former officials.