A Landscape Of Flags 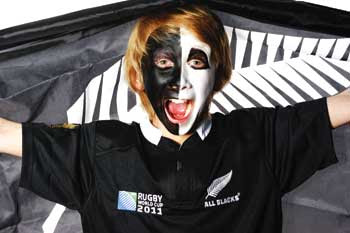 In The Shadow Of The Flag:  Mass outpourings of triumphal emotion are all-too-often accompanied by an underlying consciousness of sacrifice and loss. We should never forget that those sacrifices were made so future generations could enjoy moments of joyous inclusiveness - like New Zealand's victory in the Rugby World Cup 2011 - in peace and freedom.
I WENT WALKING with my daughter last Sunday afternoon – RWC-Final Day. Landscape Road is a dead straight kilometre of bitumen and concrete linking Auckland’s much more famous Mt Eden and Dominion Roads.
Socially, the neighbourhood is what you would probably call “mixed”. To the east rise the tall trees and grand houses of Epsom. In Mt Roskill, to the south-west, the ancient lava-flats are traversed by street after street of state houses – among the first to be constructed by the First Labour Government. Along the length of Landscape Road you can see both sorts of dwellings – and a great many more that are neither grand, nor government-built: the modest bungalows of Middle New Zealand.
As we made our way down Landscape Road, the first things we noticed were the flags. They were everywhere: tied to hedges; affixed to windows; nailed to fences; flying from rooftops. I’d never seen so many. And it wasn’t only the New Zealand Ensign that was on display. Outnumbering our national flag by a margin of 2:1 was the silver-fern-on-a-sable-field that is the “All-Blacks” flag. Ranged alongside these quintessentially Kiwi emblems were the flags of the many nations out of which New Zealand itself has been fashioned: England, Scotland, Wales, Ireland, Tonga, Samoa, South Africa.
I remarked to my daughter how unusual it was for New Zealanders to indulge in this sort of overt display; how we tended to scoff at the ultra-patriotism of the Americans and their habit of flying “Old Glory” over anything and everything: from the overcrowded trailer parks of the poor; to the quiet suburban streets of the middle class; to the luxurious mansions of the obscenely rich. And yet, right there, fluttering before us, was proof that New Zealanders – no less than Americans – are capable of being swept up in the fierce passions of national pride.
“Can you imagine how upset New Zealand will be if the All-Blacks lose tonight?”, I said.
My daughter stood still, looked around at the multitude of fluttering pennants, and slowly shook her head.
But, as all the world now knows, the All-Blacks didn’t lose. And, with their re-claiming of the Webb-Ellis Cup, all that longing, all that confidence, which the flags down Landscape Road represented, has been vindicated.
And how we celebrated. To see literally hundreds-of-thousands of Aucklanders pour into the heart of their city to share in the elation of this long-anticipated sporting victory put me in mind of the vast crowds thronging Tahrir Square in Cairo or Martyrs’ Square in Tripoli. What a fortunate nation, I thought to myself: that its people can turn out in such numbers for something so innocent, so free of death and misery, as a sporting trophy.
How wonderful that our joy in the All-Blacks’ triumph was so emotionally unalloyed. That, beneath the revels, there ran no deeper sadness; no heart-rending knowledge that the price of victory must be counted in the bodies of the fallen.
Historically-speaking, New Zealand is no stranger to those feelings: following two world wars we were forced to undertake our own, grim, calculation of victory’s cost. And let us remember that it was for the possibility of just such moments of happiness, inclusiveness, unity and pride; moments shared by a free people, living in a tried and tested democracy, that New Zealand “laid upon the altar the dearest and the best” she had to offer.
So, as we once again avail ourselves of those democratic instruments, purchased at such expense by our ancestors, let us strive to preserve, in the allocation of our support, that same happiness, inclusiveness, unity and pride that illuminated the nation last Sunday night. Let us give our support only to those who would use our votes as tools for creation – not as weapons to exclude, threaten or destroy.
What made Sunday’s victory so special was that the joy it brought was available to everyone. That, in the shadow of those flags, we were all New Zealanders – all winners.
This essay was originally published in The Dominion Post, The Timaru Herald, The Taranaki Daily News, The Otago Daily Times, The Greymouth Star and The Waikato Times of Friday, 28 October 2011.
Posted by Chris Trotter at 08:00

Yes, let's forget about all the huy kids. Bread and circuses.

What a cringemaking sentimental nationalist wank.

“Can you imagine how upset New Zealand will be if the All-Blacks lose tonight?”, I said."

Actually Chris, I think that we might have collectively dodged a pretty big bullet, last Sunday night. It just needed that last French penalty kick to have gone over and the whole RWC experience could well have descended from merry bonhomie into dystopic mayhem and destruction!
Having several tens of thousands of young, well liquored-up rugby fans thronging Auckland’s central city precincts – all confidently expecting a convincing victory over an already written-off opposition, the consequences of an unexpected loss would have been shattering and, at worst, potentially disastrous. This is not mere theorising – I was very close to the location of the initial outbreak of the 1985 Queen St Riots, from which I rapidly removed myself (not having a camera on me and seeing no point in risking wearing a flying wine bottle to my head!), and we also have this:

“Violence erupted in Vancouver on Wednesday night [June 15th 2011] after the city's ice hockey team lost in the final of the north American championship, the Stanley Cup.
Angry, drunken Vancouver Canucks fans took to the streets, setting cars and rubbish bins ablaze, smashing windows, showering giant TV screens with beer bottles, dancing atop overturned vehicles and looting shops. Two police cars were trashed.
Police responded with teargas, the first time it has been used by city officers since riots in 1994 – also sparked by a Canucks defeat, according to the Globe and Mail.”
http://www.guardian.co.uk/world/2011/jun/16/vancouver-canucks-fans-riot-stanley-cup

Ok, so our team did win this time, thank goodness! It’s tempting fate, though, to confer such huge favouritism on the home team and ramp up public expectation so, and not contemplate the consequences of the script not running as ordained, as so nearly happened! After all, the French had done us twice in the past! I would hope that in future, public expectations in such situations are not whipped up so much by the sporting punditry and the media so that adverse results from the field of play are accepted with sober disappointment and equanimity rather than (what could be) outbursts of outrage easily sparked into civil disturbance. I wonder if McCully et. al. had thought all this through and how the Government might have responded if the result had gone the other way with some of the thronging fan zone crowd turning feral as a result! Such a scenario, following on from Rena and other recent smaller blunders, would have been disastrous for National just a few weeks out from the up-coming general election. But perhaps all this was, to it and the rest of the populous (to quote Donald Rumsfeld) “an unknown unknown”! And so the country basks in the joys of the moment and remains blissfully unaware of these darker consequences of defeat.

Che told his followers that no one who was not a patriot could be a revolutionary.

Guess that counts you out Anonymous@6;25pm.

Interesting thoughts Chris. My grandfather spent 3 years up in the Pacific fighting Japanese fascism. He never spoke much about the war (to me at any rate.)

But I'm pretty sure he did not risk his life and liberty so that the government could sign substantial portions of our soveriegnty over to the IRB or RWC Ltd. He lived in Mt Eden till he died and would have been disgusted with the restrictions placed on businesses unfortunate enough to be in a "clean zone". And the appointment of Murray McCully as RWC Fuhrer would have stuck in his craw.

Yeah I played rugby for years and enjoyed it hugely. The best team of the tournament did win, but not the best team on finals night. Just as well, according to John M.

Now there is another circus going on at the moment....hmmmm...oh yeah an election....

That should be hungry kids. Is this the blog acting up again? It took me 10 mins to get that much.