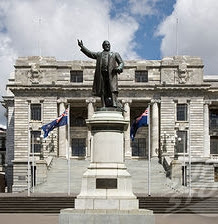 Every Man A King: Richard "King Dick" Seddon, New Zealand's longest serving prime-minister, set in place the notion that the will of the New Zealand people must trump all else. In this, the informal constitution of New Zealand, Parliament has always been the nation's highest court. For most Kiwis the power of the majority is supreme and indivisible: it answers to no one.
IT’S ONE OF the most extraordinary sounds you’ll ever hear: the sound of the legal profession singing in unison. The Government’s urgent attempts to stuff the Supreme-Court-created hole in Police surveillance powers with legislative Polyfilla has got the legal fraternity on its hind legs, bellowing like a baited bear.
The principle at stake, cries that doyen of be-wigged boffins everywhere, Sir Geoffrey Palmer, is nothing less than “The Rule of Law” itself. Governments which – retrospectively –overturn the judgements of their highest courts, this former law professor and Prime Minister warned the select committee examining the legislation, are in danger of being mistaken for tyrants.
The judicial arm of the state must be capable of restraining the executive arm when it transgresses the boundaries set by the legislative arm – say the experts – or no citizen is safe.
Except that most of these citizens aren’t big fans of the classical liberal notion of the separation of powers. In the eyes of most New Zealanders, the State is ruled by only one body – “Parliament” (by which they mean the House of Representatives). The “executive arm” of the State (Cabinet) and the “judicial arm” (all courts up to and including the Supreme Court) are there to give effect to Parliament’s will.
In any legal arm-wrestling contest, nobody beats the people’s elected representatives. Parliament is New Zealand’s Supreme Court.
Of course, this is not the official view of New Zealand’s constitution, which cleaves loyally to the separation of powers doctrine. But, there is a very big difference in this country between constitutional theory and constitutional practice.
Uniquely, among the inheritor states of the British Empire, New Zealand possesses no written constitution; no entrenched Bill of Rights; no Supreme Court with powers to strike down “unconstitutional” legislation; and no “upper” house to scrutinise and/or delay the legislation of a “lower” house.
Kiwis aren’t very keen on terms like “upper” and “lower” – especially when “lower” is applied to the parliamentary chamber most beholden to the people. Nor are they attracted to the idea that a bunch of unelected lawyers, dressed in antiquated wigs and gowns, should be able to strike down or gainsay the intentions of the men and women chosen by the people to govern the country.
What the overwhelming majority of Kiwis do affirm, however, is the idea that “majority rules”. It’s a disarmingly simple constitutional principle: the person, or persons, in command of a majority of seats in the House of Representatives get to run the country.
Stated bluntly, “majority rules” means that the “executive arm” of the State is not a co-equal, but a sub-set, of the “legislative arm”, and remains effective only for so long as it enjoys the legislature’s confidence.
It’s the same with the judiciary. Being nominated and appointed by agents ultimately dependent on the confidence of the House of Representatives, judges should not consider themselves the co-equals of Members of Parliament  – but their servants.
Parliament’s reaction to the Supreme Court’s decision in Crown & Hamed provides an excellent demonstration of “majority rules” in action.
John Key is Prime Minister because the last general election gave his own (and a sufficient number of like-minded parties) a majority of seats in the House of Representatives. An important part of the mandate National and its allies received from the voters involved taking a hard-line on law and order issues. Mr Key’s interpretation of the Supreme Court’s decision on Police surveillance powers was that it placed intolerable obstacles in the way of his government carrying out the people’s mandate. Accordingly, his Attorney-General introduced legislation effectively overturning the Supreme Court’s decision.
At the time of writing it’s unclear if Mr Key will be able to persuade a majority of the House of Representatives to vote for his legislation. If he fails, then the Supreme Court’s decision will stand.
But, let’s be very clear. It will stand because a majority of the people’s representatives could not be convinced that the Government’s bill accurately reflected its electoral mandate on law enforcement. Indeed, a victory for the “Noes” will indicate that, on the matter of the unrestricted video surveillance of suspects, the people’s representatives are asking both the Courts and the Police to take their fellow citizens’ right to be protected from “unreasonable search and seizure” a great deal more seriously.
Like any good legal counsel, the Supreme Court may then be said to have provided the people’s representatives with sound and useful advice on a matter important to the good governance of the nation, and they will have acted accordingly.
But, if the Government does manage to muster the majority it needs, Parliament will have reached an altogether different conclusion. That, in order to secure the conviction of serious wrong-doers, the powers of the Police must be strengthened.
Either way, the people’s song will have triumphed.
This essay was originally published in The Press of Tuesday, 4 October 2011.
Posted by Chris Trotter at 11:33

That buffoon Palmer complaining about it will almost certainly lead most New Zealanders to reflexively support the government.

Why can't that man keep his mouth shut for the good of the country?

Australia does not have a bill of rights at all.

I'm with Chris on this one: free the Urewera 17!