The Forty-First Day (A Christmas Story) 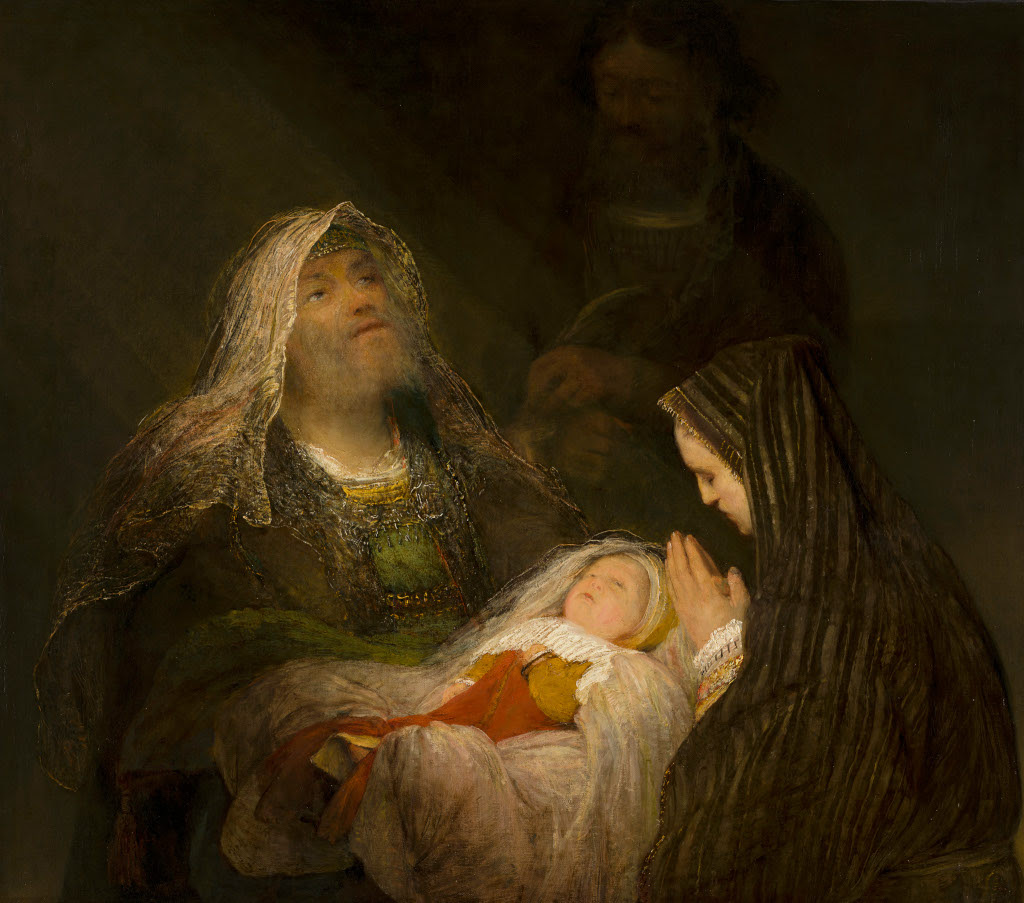 Immanuel - God Is With Us: Tiny, yet huge. Helpless, yet more powerful that all of Caesar’s armies. Simeon and Anna greet the infant Jesus at the Temple in Jerusalem. (Painting by Arent de Gelder)
IT IS FORTY-ONE DAYS since the star cast its light over Bethlehem, and still we wait. Anna and I, in the shade of the cloisters, as the people come and go, and the smoke of the sacrifices rises. As much a part of the temple as the great gilt doors and the smooth marble pillars. Sitting. Waiting.
Anna is old by any man’s reckoning. Fourscore years and four, they say. She remembers the Second Temple before King Herod arrayed it in cold marble and bright gold.
‘The Temple is Israel’s heart’, Anna says, ‘it’s Holy of Holies. But it does not hold its soul.’ Anna never wavers from this. ‘Not even marble and gold’, she says, ‘can house a person’s soul.’
And so we argued, back and forth. Blind Simeon and Ancient Anna. As the world swirled around us and the years piled up like broken sandals. Fixtures of the Temple Court: constant as the money-changers; harmless as the sacrificial doves.
Until the dreams.
A light, growing in the darkness of our slumbers. Every night it shone more brightly – resolving itself, at length, into the image of a great star, drawing ever nearer.
And then we heard the voice. At first, no more than a whisper. Moving through our minds as the wind moves through the Temple Veil, breathing out the sacred consonants. The words were hard to catch – but I recognised them. For had I not made myself blind reading the holy books? Pouring over them by lamplight until the characters swam away into mist and darkness?
“But as for you, Bethlehem Ephrathah, Too little to be among the clans of Judah, from you one will go forth for me to be ruler in Israel. His goings forth are from long ago, from the days of eternity.”
The words of the prophet, Micah. But what could they mean?
Anna dreamt too. In hers a voice spoke clearly from the very heart of the star.
“Therefore the Lord himself shall give you a sign; behold, a virgin shall conceive, and bear a son, and shall call his name Immanuel.”
Immanuel. God is with us.
And then the dream came true. Low in the western sky it shone, night after night, just after the going down of the sun. A star where no star had been before. And every evening it grew brighter, until the night – forty-one days ago it was – when it seemed to hover, lower than ever in the night sky, over Bethlehem.
And the next morning the shepherds came. With wide eyes and stammering tongues they told us of what they had seen: the heavenly host; the stable; the woman; the child. One of the shepherds, eyes wider than all the rest, took me by the arm.
“Death draws near, Blind Simeon. But not before your eyes behold the saviour: God’s true son, here, in the Temple, on the forty-first day.”
And so we wait, Anna and I. Here, in the shade of the cloisters. On the forty-first day.
Anna saw them first. The little family. Rustic and awestruck amid Herod’s splendour. She grabbed me by the sleeve and led me to them.
“Here, at last,” she said, “is one fit to hold men’s souls. Good Lady will you let Blind Simeon, the Rabbi, bless your son?”
I took the babe in my arms. And like a curtain drawn aside, light flooded into my waking mind, and I saw him. Tiny, yet huge. Helpless, yet more powerful that all of Caesar’s armies. I lifted him high above my head, so all could see, and cried out in a voice that echoed off the Temple walls:
“Lord, now lettest thou thy servant depart in peace, according to thy word: for mine eyes have seen thy salvation, which thou hast prepared before the face of all people; a light to lighten the Gentiles, and the glory of thy people Israel.”
Above our heads, a dove flapped wildly, and was gone.
This short story was originally published in The Dominion Post, The Otago Daily Times, The Waikato Times, The Taranaki Daily News, The Timaru Herald and The Greymouth Star of Friday, 23 December 2011.
Posted by Chris Trotter at 09:51

Have you really got nothing better to do?

Of things to do, there is nothing better.

Words of hope. Thanks Chris

Greetings, Chris,
Is it possible to reprint your stories (eg Forty-first Day) in a church newsletter?
Joce