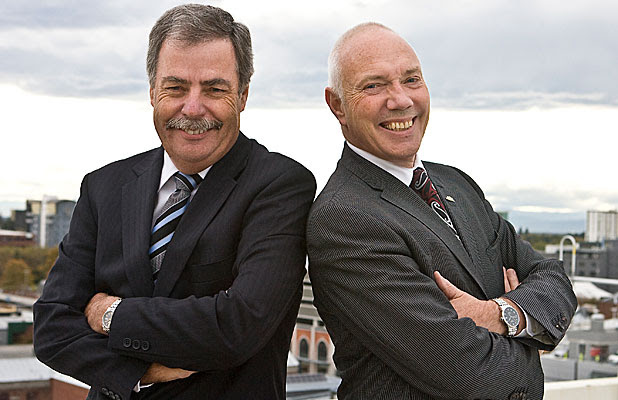 A Dangerous Duet: The failure of leadership on the part of the Christchurch City Council's CEO, Tony Marryatt (Left) and its Mayor, Bob Parker (Right) has plunged the city's sole remaining local democratic institution into crisis. The appointment of a Government "Observer" to "advise" Cantabrians' democratically elected representatives has only added to their humiliation.
CANTABRIANS DESERVED BETTER from the Christchurch City Council. Thanks to the inability of their elected representatives to fulfil their civic responsibilities, the citizens of Christchurch may lose their right to local democratic representation.
The humiliation of a government-appointed “observer” has already been visited upon the Council, and the threat of outright dissolution, though unspoken, is very real. Political gridlock in the face of critical decisions that cannot wait was the excuse for shutting down the Canterbury Regional Council. It’s a daunting precedent.
The tragic aspect of Christchurch’s local government crisis is that it comes at a time when the need for effective democratic representation has never been greater. The huge destruction wrought by a succession of earthquakes has spawned an equally huge array of public and private remedial bureaucracies. Equipped with formidable powers, these bureaucracies march to the mechanical drum-beat of hierarchy and administrative fiat – not democratic accountability. The men and women elected to the Christchurch City Council constitute the only effective local check upon the power of these institutions. To be the voice of the quake-stricken people of Christchurch, they must cease acting as soloists and become choristers.
But to meld a council of strong-willed and opinionated individuals into a united team of citizens’ advocates requires leadership of the highest order. Unfortunately, this has not been forthcoming. Neither the Mayor, Bob Parker, nor the Council CEO, Tony Marryatt, appear to have grasped the urgency of transforming the Council into the principal advocate of – and for – Christchurch’s battered citizens. On the contrary, both men seem to have scant regard for the three principles indispensable to the construction of unity: transparency; consultation; and accountability.
Local democracy is not about gathering together a bare majority of compliant cronies whose sole contribution to local government is to rubber-stamp the joint recommendations of the Mayor and his CEO. And it is certainly not about the Mayor’s cronies, puffed-up with pride at their insider status, heaping scorn upon those councillors denied admission to the magic circle of power. Indeed, nothing is more calculated to breed disunity, disaffection and defensiveness: the very feelings that cause politicians to resort to that time-honoured response to secrecy and exclusion – the leak.
Of all the many sins capable of arousing the fury of administrative authoritarians the leaking of privileged information is the most egregious. Their invariable response is to double-down on the secrecy while setting in motion a witch-hunt for the person or persons responsible. The “Us versus Them” mentality is thus transferred from the council table to the council bureaucracy. In consequence, the political and administrative dysfunction, far from being reduced, intensifies.
Administrative Authoritarianism thus lies at the heart of Christchurch’s local government crisis. In a nutshell, the administrative authoritarian regards the elected representative as an ill-informed, unprofessional irritant to the “effective and efficient” operation of whatever institution they have been hired (usually on an exorbitant salary) to administer.
A CEO in the grip of administrative authoritarianism has a vested interest in surrounding himself with vainglorious but intellectually vacuous politicians; persons easily persuaded to stand in the glare of the media’s spotlights and “sell” policies they had no hand in fashioning, and about which they have little to contribute beyond the talking-points handed to them by the CEO’s public relations “experts”.
Two manifestations of administrative authoritarianism deserve special attention. The so far unsuccessful attempts by local government officials to impose legal restraints on the degree to which elected representatives can participate in contentious debates. And, the Local Government Commission’s on-going campaign to reduce the number of elected representatives on city councils and with them the ratio of councillors to citizens.
In 1993, Christchurch – which then boasted a council of twenty-four elected representatives – won the coveted Carl Bertelsmann Prize for “Best Governed City in the World”. A decade later the Local Government Commission reduced the number of Christchurch City Councillors to twelve. Where once the Mayor and CEO of Christchurch City had to round-up twelve to thirteen compliant councillors, they now needed to corral only six or seven.
The subordination of active democratic participation to “effective and efficient” management is a dangerous development at the best of times, but in the face of natural disasters on the scale of the Christchurch earthquakes it is nothing less than catastrophic.
Citizens desperate to “get things done” all-too-easily fall prey to the hard-edged promptings of administrative authoritarians – handing over powers that should never be surrendered to those who dismiss democracy as an unwelcome hindrance to “good governance”.
Disasters bring with them remedial institutions guided by – at best – a ruthless utilitarianism. Which is why, amidst impassive bureaucracies dedicated to “the greatest good for the greatest number” there must remain a united and democratic Christchurch City Council, jealously guarding its power to protect and serve that most vulnerable, but important, of persons: the individual citizen.
This essay was originally published in The Press of Tuesday, 31st January 2012.
Posted by Chris Trotter at 10:23

Just correcting - that in 2003 the number of Councillors was reduced from 24 to 12 - which went up to 13 when Banks Peninsula DC was abolished and included in CCC.

Great post Chris. Having myself abandoned Christchurch after the February quake I have to say that for 5 years that was the most self-serving back-scratching group of loval officials I've ever seen. And I grew up in the US south east where nepotism is a birthright.
Never was local comment encouraged and the only people garnering press and invited to public debates were those that the other "experienced" councillors knew woiuld fit in, example Jamie Gough. If they ever stood up for the locals it would be a true win as I can still remember that these elected officials pull down 2 salaries, first as a councillor and then a second one because a councillor is automatically a director on the boards for all the city-owned companies. My new local board isn't some amazing entity but I actually see them in town and they talk to the locals. It's a fresh revelation to me.
Keep the heat on those guys, it would be interesting to see how many of them still actually live in CHch or have moved to the surrounding environs and left the people behind in body as well as spirit.

Trouble at mill for Commissar Parker at the socialist republic of Christchurch. The whole rotten system is imploding with the generals bickering as Rome burns and the Proletariat mass at the Bastille. Christchurch needs a Perestroika and a second coming of Gorbacev. I would like to see Peter Townsend of the Canterbury Chamber of Commerce be appointed to oversee the rebuild of Christchurch.
The Council is more like Gervais’s “The Office” than a modern performing organisation. Appointing councillors as directors’ to council controlled entities smacks of party nepotism and cronyism and inefficiency (what an ex-radio jock can bring by of commercial acumen defies logic). Orion and the Port have abysmal rates of return on assets underpinned by subsidisation from ratepayers. Sooner the Government combines the Council and Ecan the better! Rob Fyfe are you interested?

Rob Fyfe? No, we need some socialists like the ones who sorted out the ARST. People who believe government can work - not people who think it should be abolished.

It is a pity Jim Anderton stood in the last local body elections. He does not exactly have a long history of uniting organizations, and I knew him slightly in the Alliance days. I decided not to vote for him before the September quake.

Anyway - time to think about the next election. I wish people would just stand under the party banners they belong to instead of trying to hide behind these weird organizations. You should check out the Independent Citizens President and candidate Rosanne Hawarden's views on Maori origins.