All Equal Under The African Sun 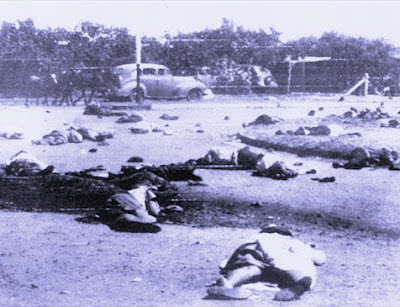 Sharpeville, South Africa, 21 March 1960: Sixty-nine black South Africans, protesting against Apartheid, were shot down by the white South African police. White rule could only be maintained and enforced by systematic and deadly state violence.

YOU CAN TELL it’s a hot day. The sky has that washed out quality and all the shadows are tucked in tight. The ground is dusty. Sunlight shimmers on the leaves of the trees. Judging by the distinctive styling of the parked cars, it’s more than sixty years ago. In the foreground of the photograph, sprawled awkwardly in the mid-day heat, you can count more than twenty bodies. All shot in the back while running away. Discarded shoes and hats and handbags fill the spaces between the men and women who fell. Blood is mixed with the dust in Sharpeville, South Africa, 21 March 1960.

It’s a famous photo – what the propagandists call a “recruiter”. I can’t have been more than twelve or thirteen when my eyes first consciously registered all those motionless bodies baking in the Transvaal heat, but even then I knew that such photographs are included in history books for a reason. Such images affront us; challenge us; dare us to do something about it.

And we did do something about it. In the years after 1960 more and more New Zealanders voiced their opposition to the Apartheid system of racial segregation and exploitation responsible for the Sharpeville Massacre. In 1981 we astonished the world with the vehemence of our protests against the touring South African rugby team. And when, at last, the saintly Nelson Mandela, leader of the African National Congress (ANC) was released from his Robben Island prison, and black South Africans won their freedom, we New Zealanders felt a special pride. The new, non-racial, Republic of South Africa seemed to us the very epitome of Good triumphing over Evil. Sharpeville was avenged.

But, we were deceived.

Much as we would like to believe that it was the street protests of 1981 that tipped the balance against the Apartheid regime, it was, in fact, the international boycott of South African exports that prompted the leading White politicians and businessmen to contemplate abandoning the increasingly unsustainable moral and material infrastructure of Apartheid.

But, before they could act, they needed some iron-clad reassurances. The transfer of power from the old system to the new must be peaceful. The farms and businesses of the Afrikaner minority must not be seized. And, most importantly, there must be no wholesale nationalisation of South Africa’s key, export-earning, multinational mining operations. That these demands would require the ANC to repudiate most of its core economic and social objectives was well understood by the negotiators on both sides, and yet the ANC agreed. Why?

Here we have to step back a little and ask ourselves what else was going on in the late 1980s and early 1990s.

That the release of Mr Mandela coincided with the end of the Cold War was not accidental. While the world remained divided into two competing ideological blocs, both baring nuclear teeth, the radical socialisation of South Africa’s economy was a viable proposition. By the late 1980s, however, “actually existing socialism” was everywhere in retreat, and with the collapse of the Soviet Union in 1991 the ANC’s economic and social programme became an instant anachronism. The global triumph of free-market economics left Mr Mandela with no option but to limit the ANC’s “revolution” to purely political objectives. South Africa’s 1996 Constitution guarantees all South Africans formal equality under the law, but the economic realities – which drove the White minority to erect the institutions of Apartheid in the first instance – remain in place.

The millions of black South Africans who queued for hours to cast their first democratic ballots in 1994 undoubtedly regarded the ANC as their liberator and guarantor of a free and more prosperous future. In reality, however, the ANC Government could only be the protector of the economic status-quo. The redistribution of wealth, which most black South Africans had assumed would follow the ending of Apartheid, did not materialise.

Rustenburg, South Africa, Thursday, 16 August 2012. In the dust and scrub outside the British-owned Lonmin platinum mine a terrible silence has fallen. Clouds of tear gas swirl and mingle with the acrid smoke from discharged pistols and automatic rifles. Between the lines of armed police and striking miners lie more than a hundred dead and wounded South African citizens. 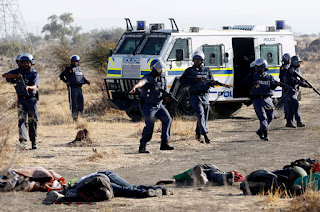 All are equal under the African sun, but some, in George Orwell’s bitter formulation, remain “more equal than others”.

This essay was originally published in The Press of Tuesday, 21 August 2012.
Posted by Chris Trotter at 11:02

I fundamentally disagree with your assertion that the ANC Government could only be the protector of the economic status-quo. While I accept that a programme of nationalisation might have appeared too radical at that point in South Africa's history, the ANC Government has nevertheless had almost 20 years in which to improve the lives of the millions excluded economically, socially and culturally under apartheid. For the vast majority of people, this has not happened.

S'bu Zikode, the president of Abahlali baseMjondolo, and many other contemporary activists report alarming examples of repression and ongoing hardship under ANC rule. And those of us who have visited there recently or who follow the country's development through progressive media know well about the personal enrichment and moral decay of the new elite.

Since the opening of the first democratically elected parliament in South Africa and the Marikana Massacre last week a new generation has entered the world and grown to adulthood. Sadly, for many born under the South African sky over the past 18 years, the deprivations and cruelty their parents and grandparents endured are their shared experience as well.

Certainly the oppressed of RSA had the great twin historical factors of farewelling apartheid at the peak of neo liberalism and the end of the cold war. The latter while not missed by many would likely have seen non aligned soviet proxies and various eastern bloc countries give needed material aid.

I think Chris is right, the corporates would not have consented to the end of the apartheid system as quietly as they did without well knowing they would still be standing on the throats of the people under an ANC administration.
ANC, COSATU and the CP have all succumbed one way or another to a class peace approach.


At times it seemed Mandela’s truth and reconciliation approach bent over backwards to accomodate the apartheid state brutes. To what end really? Thousands of white saffas have managed to move offshore to “whiter” climes like Aucklands North Shore.

At least there remains a sting in tail for the New Zealand ruling class following the victory of the section of the anti tour movement that wanted to move on to tackling racism in this country. The post colonial and Te Tiriti debate in Aotearoa is well alive and kicking.
Good on the likes of John Minto for declining invitations to the recent ANC function here.

So why such a representative roll call of other older lefties at that function?

Yes, they were just about all there.

Either they don't read this blog, or have suddenly and uncharateristacly got writers block.

The HART veterans silence bounces off the bones.

A case of “that was then this is now” for some tour veterans one could speculate. The abject failure of the ANC in delivering does not negate the magnificent efforts put in previously by kiwis against apartheid.

Minto has been consistent over the years and always pointed out the flaws of the ANC. The small hard left parties as usual had major ructions over who to support, PAC etc.

I spent the winter of ’81 at MOST meetings, training sessions, match day protests, court hearings, keeping ahead of pro tour thugs, watching out for ludicrously evident ‘undercovers’ etc. so am reasonably qualified to comment.

It was always up to the South African people to sort out in the long run, but this recent massacre suggests a new initiative of international solidarity is needed for the still oppressed of South Africa. Perhaps more than a few NZ liberals switched off after saint Nelson was released, attained office and RSA inexorably became more like “District 9” than anyone could have imagined in 1981.

You miss one important aspect. Southern African countries are corrupt - a gross generalisation but unfortunately one that is true. Tanzania, Mozambique etc. It appears to be cultural and will take decades to work out.

Zuma's undemocratic assumption of power and his abuse of power to avoid prosecution over back handers in major deals are great examples. The likes of Mandella who even white South Africans believe was an honest man are sadly an exception.

South Africans didn't come out any better out of the regime change and arguably worse. They replaced a white elite with a black elite and a damn site more crime.

Blacks can't be racist
http://www.enca.com/south-africa/justice-department-finalising-hate-crimes-legislation
Blacks should be exempt from ant-racism laws they say.
If humans are ethnocentric (bonded by oxytocin) then aren't blacks just as racist as anyone else. The difference is that one group beats the other to control of resources (as Chinese are doing with Auckland housing)?

The progressive dream is that you can mandate a harmonious society: "in NZ we celebrate diversity".
That view overlooks a stable/settled economic system which relates to the resources of the country and web of relationships with it's peoples which have developed over time. Eg in NZ's case we could identity who we were and what we did. Now we can no longer see what we do but we hide behind the smoke of economic terminology. Imagine if we reformed political speak so politicians and economists could no longer use weasel words and phrases but had to be specific? That and the system prevails because the media control what is asked and what is made public.