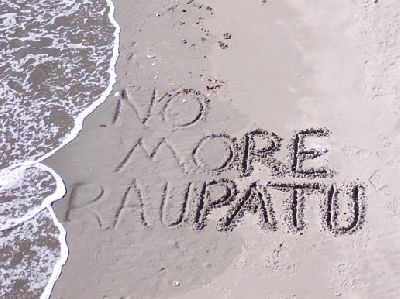 Water Rights: If Maori are able to remain united in their attempts to clarify the nature of any proprietary rights they may still enjoy over New Zealand's water resources, John Key's asset sales programme may yet fall victim to an indigenous strategy of "divide and rule".

DIVIDE ET IMPERA – “divide and rule” – was the central principle of Roman imperial government. Identify a conquered people’s long-standing social, economic and political fissures and drive your wedges home – as many as possible. Not for nothing did the British aristocracy set their sons to the systematic study of classical texts. Britain’s imperialists, like Rome’s, were masters at dividing and ruling. The easy British victories in the New Zealand Land Wars owe a huge debt to “the loyal Maoris” who were cajoled into taking Queen Victoria’s shilling.

New Zealand’s colonial elites came rather late to the art of dividing and ruling. Like their counterparts in Canada, the United States and Australia the assumption of the settler societies nurtured beneath Britannia’s imperial shield was that their troublesome “natives” would simply succumb to the Anglo-Saxon invaders’ genetic superiority (or, failing that, their guns and germs). In all but New Zealand’s case these genocidal expectations were largely (if not wholly) fulfilled. The “first peoples” of Britain’s non-tropical empire did indeed dwindle to politically insignificant percentages of the “White Dominions’” populations.

But not here. Successive settler governments’ efforts to “smooth the pillow of a dying race” notwithstanding, Maori numbers recovered and grew. Currently comprising between 10-15 percent of the population, New Zealand’s indigenous people constitute a significant and un-ignorable minority. Too few to win back their lost lands, but far too many to be simply shunted out of sight (and mind?) in the manner of the Canadian, American and Australian settler regimes. How to govern a settler state in which the indigenous population steadfastly refuses to fade into history has thus become one of the New Zealand political class’s most intractable problems.

The looming impasse over the partial sale of the four state-owned energy companies offers an excellent opportunity to see practically all of the New Zealand State’s Maori management mechanisms in play and to assess their effectiveness. Among the many institutions and groups involved are the NZ Maori Council, The Waitangi Tribunal, The Iwi Leaders Group and the Maori Party.

Each, in its own way, represents an attempt by Pakeha to either co-opt and/or pacify Maori resistance, or, by Maori, to exploit and/or challenge the post-colonial Pakeha Establishment. Ironically, the institution established to bring traditional Maori leaders into the Settler State’s tent (the Maori Council) and the quasi-judicial body set up to mollify the angry Maori masses (the Waitangi Tribunal) have become the primary vectors of indigenous resistance. By contrast, the Maori Party, launched to overturn the Foreshore & Seabed Act, which many Maori regarded as another raupatu (confiscation) has taken on the historical role of those “Loyal Maori” of the Land Wars.

Only the Iwi Leaders Group has yet to show its hand in this game of post-colonial poker. How it chooses to play its cards may yet determine whether the National-led Government’s controversial asset-sales programme proceeds smoothly, or becomes hopelessly, perhaps fatally, mired in legal challenges.

The Iwi Leaders Group, like the Maori Council before it, owes this position to the Pakeha Right’s rather belated attempt to copy the divide and rule tactics of the British imperialists from whom it inherited its economic dominance.

By enlisting the men and women of aristocratic lineage and/or great mana, the National Party hoped the Maori Council would off-set the political advantage its socialist rivals had acquired through their electoral alliance with the revitalist religious-political movement of Tahupotiki Wiremu Ratana.

In another historical irony, however, it was the Labour Party’s privatisation drive of the 1980s which gave rise to the judicially-inspired notion of a Treaty of Waitangi-mandated, Maori-Pakeha “partnership”. Seeking to mollify the growing anger of a new generation of Maori nationalists, Labour had extended the purview of the long-disregarded Treaty of Waitangi all the way back to the year of its signing in 1840. The subsequent “Treaty settlements”, negotiated by National Party ministers, saw hundreds of millions of dollars passing into the hands of tribal representatives. The elaboration of these significant capital transfers into powerful tribal corporations gave rise to a new Maori elite which the Right has attempted to fashion into a protective shield against the urgent social and economic claims of the growing Maori underclass.

The choice now confronting the Iwi Leaders Group is, therefore, a profound one. Either, it will facilitate the National Government’s partial asset sales programme by negotiating some form of tribally-based compensation, or, it will throw its weight behind the Waitangi Tribunal and the Maori Council. The latter course would align them in a politically significant way with the needs and aspirations of non-elite Maori: the beleaguered whanau and hapu who constitute the primary victims of National’s neoliberal policies.

Looking at the large number of Pakeha opposed to asset sales, Maori might then decide to practice a little “divide and rule” of their own.

This essay was originally published in The Press of Tuesday, 7 August 2012.
Posted by Chris Trotter at 17:49

Excellent commentary Chris, this style of writing is a welcome relief from your Labour Party 'road testing', please keep it up.

Our heritage is predominantly Celtic and Pacific Island blood mix, and we Celts know in our heart of hearts that Maori are a cornerstone of our make up, and who we are, as a nation.

The Maori who supported the government in the 19th century often didn't need much 'cajoling'-they were only too happy to settles old scores and tribal differences with the assistance of the government of the day. On the East Coast Roparta was an enthusiatic supporter and tracked Te Kooti with a will. In fact the European soldiers preferred his command to that of the English twit who was nominally in charge. The problem with today's history writing is that is overlaid both with a PC concept and with the need to satisify the $ demands that iwi place on it. Ropata was said by the Waitangi Tribunal to be someone who didn't adhere to the Treaty! How stupid is that as a criticism?

No Jigsaw, the trouble with history today is that it is often written by amateurs with an axe to grind rather than proper historians who know something about the Maori mindset. This whole PC idea is too often thrown around by the ignorant. If PC means doing proper research and not treating Maori as Brown Pakeha then I'm all for it.

James Cowan spoke Maori and spoke to the people who were there at the time. Modern historians dismiss his work as too 'Victorian'-the whole concept of 'proper historians' ie university historians just shows how brainwashed you have become.

How can Maori tribalists be socialists, except within their own tribe? By that measure the Koch Brothers are socialists.