In Praise Of Dinosaurs 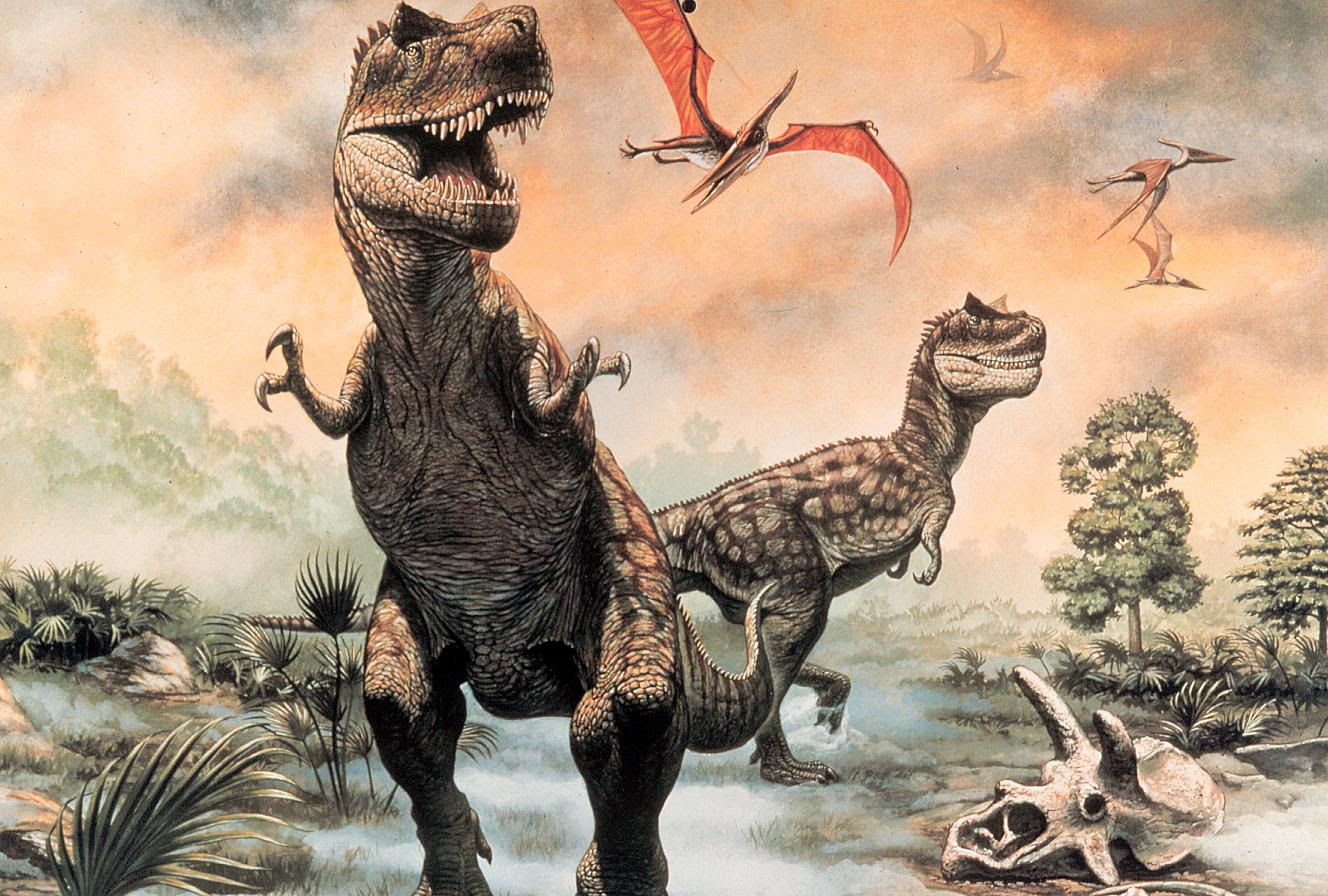 Evolutionary Success Story: Dinosaurs dominated the Earth for 135 million years. The way we're going, we Homo Sapiens will be lucky to celebrate our millionth birthday! So, the next time someone accuses you of being a dinosaur - take it as a compliment.


IT’S POSSIBLE the human species will dominate Planet Earth for longer than the dinosaurs – but I wouldn’t bet on it. The reign of these massive reptiles lasted 135 million years and was only ended by the ultimate, exogenous, extinction level event: an asteroid strike.
Homo-sapiens, by contrast, is barely a thousand centuries old, and well on the way to perfecting its own endogenous, extinction-level catastrophes. (Nuclear war, global warming, rogue bio-tech, take your pick.)
If we make it to our millionth birthday, we’ll be doing very well indeed.
The dinosaurs undeniable evolutionary success, and their blameless demise, has not, however, prevented human-beings from applying the term “dinosaur” to any institution or person who refuses to be convinced by, or bow to, the forces of “progressive” change.
In spite of the devastating asteroid strike’s role in the extinction of the dinosaurs being understood for more than thirty years, it would seem that earlier explanations for the dinosaurs’ disappearance die hard. Until 1980 it was a given that the dinosaurs had simply “failed to adapt” to a changing environment.
Hence the insult. Anybody deemed deficient or incapable of adapting to a changing world must ipso facto be “a dinosaur”.
Over a lifetime of advocating for ideas and institutions deemed inconvenient by those determined to “reform” society to their own advantage, I have been branded a “dinosaur” many times.
As if change of any description can only ever be “a good thing”, and resistance to change “a bad thing”.
My first serious encounter with the dinosaur insult came with the introduction of what we now call “Rogernomics”. Among the most forthright opponents of the onrush of the Fourth Labour Government’s “reforms” were, not surprisingly, the party’s trade union affiliates.
Predictably, the Labour Cabinet, and a fair chunk of the Labour Caucus, were infuriated by the unions show of resistance. If there was, as Roger Douglas and his Treasury advisers asserted, “no alternative” to the “free market” (as they insisted on calling the market-rigging ideology of neoliberalism) then the unions’ refusal to accept the Government’s changes was evidence not only of their economic ignorance but also of their wilful refusal to evolve.
They were “dinosaurs” – and we all know what happened to dinosaurs!
So, you see, the label wasn’t just a term of abuse. Wrapped up inside the insult was an implied, but unmistakeable, threat.
Those who stood in the way of change risked disappearing from the scene altogether.
It is hardly surprising, then, that anyone ambitious to rise in their chosen field will go to considerable lengths to avoid being branded a dinosaur. Regardless of their misgivings about any proposed course of action, and irrespective of the cogency or force of any arguments mounted against it, those in search of the “change agents’” approbation will raise no objections. Indeed, to ingratiate themselves with the people in charge, and more-or-less guarantee their patronage, the ambitious climber will dismiss all the critics of their plans as “dinosaurs”.
Giving voice to the insult is, therefore, another way of saying: “I’m with the programme – one hundred percent. Come what may, you can rely on me. Because, unlike our opponents, I ‘get it’.”
Of all potentially fatal evolutionary strategies this is the most effective. To supress all one’s doubts, and reject all contrary evidence, for reasons of personal ambition is to place one’s institution on the royal road to extinction.
It is, therefore, of some concern to discover that the dinosaur epithet is again being tossed about in Labour Party circles.
Nothing could signal more forcefully the return of the same debilitating factional strife which tore Labour apart in the late-1980s and early 90s than this renewed willingness to characterise one’s political opponents as lumbering behemoths of maladaptation lacking the simple decency to shuffle off the evolutionary stage.
Of even more concern is the news that even in the trade union movement one can now hear the dinosaur epithet.
So convinced is the senior leadership of the trade union movement that they – and they alone – possess all the answers to working people’s problems, that anyone expressing doubts about the movement’s current strategies and campaigns, or, worse still, advocating policies which the trades unions’ friends in the Labour Party have already rejected as “naive” and “stupid”, can only be creatures deserving of, and destined for, extinction.
With the benefit of historical hindsight it is now very clear that it was a similar refusal to engage with its critics and encourage open debate that left the leadership of the New Zealand trade union movement so utterly unprepared for that Everest-sized asteroid called the Employment Contracts Act which brought it so close to extinction in 1991.
Those labelled dinosaurs may simply be the first ones to have spotted that bright object in the night sky – the one heading straight for us.
This essay was originally published in The Press of Tuesday, 19 March 2013.
Posted by Chris Trotter at 10:55

Chris, what exactly are you talking about? This is all very cryptic.

I'd have thought it was a pretty clear plea to Labour and Trade Union leaders not to fall-back into their old 1980s habits of dismissing dissidents as "dinosaurs" - i.e. people whose 'out-of-date' ideas do not merit serious attention.

Those who adopt this marginalise-and-denigrate-your-opponents strategy do their organisations no favours.

The thing about dinosaurs is that not all of them went extinct. Some evolved into birds and soar over the landscape today. So the metaphor might be more optimistic than at first glance.

It needs to be mentioned that Little Roger couldn't have got away with what he did without to full collusion of the TUC, notably Ken Douglas who rode off into the sunset with his saddlebags full of gold. They were the real crooks in that mad deal.

Yeah still pretty cryptic, Chris. I presume you don't want to stick your neck out enough to name specific people?

Maybe any unionist still thinking of compromising should reaquaint themselves with the following lyrics:

"Which Side Are You On?"

They say in Harlan County
There are no neutrals there
You'll either be a union man
Or a thug for J. H. Claire

Oh workers can you stand it?
Oh tell me how you can
Will you be a lousy scab
Or will you be a man?

are there for instance informal or behind the scenes discussions about

- the shape of industrial relations, and economic policy, including eroding minimum standards for more "flexability", and including

I can recall a meeting in the provinces of Union officials and the then Lange/Douglas government cadre.They were dressed like Vance Vivian mannequins, and had a allure of men in control, sadly the allure for the audience had long worn off.

When leaving the building as they walked down the stairs they were heard to comment "Unionists Dinosaurs".18 months later they where in opposition.

God, this sounds like a gossip column. "Which prominent Auckland personality was caught....." Give us names or keep quiet.