We Know HOW Ian Fletcher Was Appointed, Now We Need To Know WHY 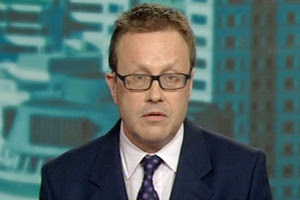 Corporate Protector: GCSB Director, Ian Fletcher. Our spies’ principal mission used to be the defence of the realm. Today’s GCSB is about the protection of corporate property.


ANDREA VANCE, political correspondent for The Sunday Star-Times, is probably right about “Fletchergate”. In her latest Sunday Politics column she predicts: “By the time Key returns from China, the Beltway will have moved on (as most of the rest of the public did days ago) until the auditor-general decides whether to investigate.”
If by “moved on” Ms Vance means “being diverted by something new”, few would disagree. We live in an age of twenty-four hour news cycles. Hour by fleeting hour, newsmakers and journalists alike are confronted with the ravening media beast’s unassuageable need to feed. Old news tends to get spat out in disgust.
But if by “moved on” she means “forgotten” or “lost interest” I think Ms Vance is mistaken. The peculiar story of the present Director of the Government Communications and Security Bureau’s (GCSB) Ian Fletcher’s, manner of appointment has left a deep impression not only on those whose job it is to follow politics (whom Ms Vance dismisses, rather contemptuously, as “the Beltway”) but also “the rest of the public”.
Indeed, the best summary of the whole affair I’ve heard was voiced last Friday by my hairdresser’s young assistant: “Got his friend the job and then pretended he hadn’t.” Sometimes I think our eyes and ears in the Parliamentary Press Gallery underestimate their own effectiveness as journalists!
The other observation I would make concerning Ms Vance’s world-weary prophesying about Fletchergate is that it runs the serious risk of being self-fulfilling. If the Press Gallery allows itself to be moved on – “nothing to see here, move along” – then the public will be left knowing quite a lot about the deficiencies of how Mr Fletcher ended up being appointed, but very little about why.
And given the nature of Mr Fletcher’s job, understanding why he was considered the only man for the job is of considerably more importance than whether the Prime Minister or the State Services Commissioner should have made the call that led to his appointment.
As John Key so colourfully summed up his view of Mr Fletcher’s suitability: “This isn’t some bunny we’ve pulled out of a hat!”
The Prime Minister’s quite correct. Mr Fletcher is very far from being a bunny. Indeed, the GCSB Director’s curriculum vitae makes for very interesting reading.
He is one of those Kiwis who, upon leaving our shores, sprouted wings and flew very high. Given the Prime Minister’s similar record of success, it is hardly surprising that, since taking office in 2008, he has done all he can to bring such high-flyers home.
But, to move the story forward to the “why” of Mr Fletcher’s appointment, what we need to know is which skills and experiences in particular – out of the many and varied talents Mr Fletcher clearly possesses – prompted Mr Key to pick up the phone?
To answer that question, we would need to know why the four individuals short-listed for interviews by the State Services Commission’s recruitment firm were deemed unsuitable. Obviously, that firm had been given a very clear idea of the GCSB Director’s job description and made its choices accordingly. But, equally obviously, there was another, undisclosed, description of the Director’s role for which none of the four candidates were suited.
It is, I believe, possible to infer from the public criticisms of the former GCSB Director, Sir Bruce Fergusson, that individuals suited for the GCSB that was (primarily a receiver and deliverer of military signals intelligence for the US National Security Agency) were not required by State Services Commissioner, Ian Rennie. The person appointed needed to be someone capable of forging a new GCSB – informed by a more contemporary intelligence-gathering culture.
The new world of espionage is no longer about intercepting Al Qaida’s latest plots. According to Stuart McMillian, writing in the National Business Review of 28/3/13: “it is the theft of intellectual property and commercial information that is causing concern”.
Intellectual property and commercial information feature prominently in Mr Fletcher’s career as a senior UK civil servant. They were also the primary drivers behind the Kim Dotcom extradition case.
Our spies’ principal mission used to be the defence of the realm. Today’s GCSB is about the protection of corporate property. As Mr McMillan noted a fortnight ago: “The government has established a group to protect major NZ infrastructure … This group is based within the Government Communications Security Bureau.”
Was Mr Fletcher ready for such a role?
Between 2002 and 2004 he was private-secretary to Sir Andrew Turnbull, the UK Cabinet Secretary. Historically, the Cabinet Secretary was the civil servant responsible for watching over the Security Forces – a responsibility Sir Andrew relinquished by delegation in the months preceding Tony Blair’s decision to join the US-led invasion of Iraq.
I’d say Mr Fletcher was ready for today’s GCSB.
Definitely worth a prime-ministerial telephone call.
This essay was originally published in The Press of Tuesday, 9 April 2013.
Posted by Chris Trotter at 08:50

I've met a few of New Zealand's top military officers over the years at embassy functions and found them to be very pleasant, principled people. One was the head of the Royal New Zealand Navy and you would never have guessed it till he told you, he was so mild mannered and approachable. What they weren't were "weasels".

It's good that this column has taken the discussion to another level.

Who were the four unsuccessful candidates?

Thanks for asking the right question, Chris

The Kim Dotcom issue seems to be different from the other 88 people spied on illegally, if the Govt/spy agency is to be believed. Kim Dotcom was thought not to be a NZ resident, hence why he was spied upon by the GCSB. Yet we are know hearing for the other 88 people, they were spied upon because of a different interpretation of the governing legislation, ie they were NZers but GCSB thought it ok to spy on them. Could it be that the latter reasoning was also the excuse for spying on Kim Dotcom, but instead and in the hope no further scrutiny would occur, the former excuse was given.

NZ has as a result of this episode should realize it has just passed first base on the road to fascism of a new variety where the interests of corporates are paramount.

It appears a more and more extraordinary organisation the GCSB. Ferreting by TV One reporter Ms Mutch has revealed it as covert organisation with a staff of 500, a budget of $100 million annually, security or par with Langley and the Pentagon. None of that James Bond Scottish, casual class.
What on earth does it do. The PM reveals it has spied on 88 NZers in 56 occurences. It has partly involved itself on a raid on a fat german internet tycoon, 80km out of Auckland. Apparently it has countered vague attempts to get info on how to build WMD. No real evidence or threat probability is provided. The only terrorist threat to NZ that the former chief of the GCSB was sinking of Rainbow Warriors, Greenpeace flagship-probably hated by half the military officers in the country. The despatch of the Otago to Muroroa in 1973 appalled most of the naval staff, although some ratings warmed to it.
Most of what the GCSB claims to do would have taken a dozen competent military officers about three weeks at the outside.
It is very difficult to do that the Echelon surveillance of email and phone calls occupies much of the local staff, becasue the targets and trigger worlds will be selected in North America 98% of the time and the processing and analysis of the date largely done their-16,000 kilometres away.
So what do they really do ?