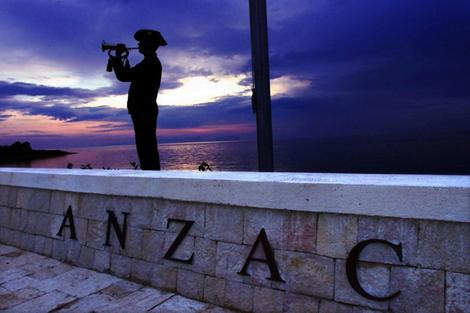 Mythos At Work: Collective memorialisation, or mythos, takes our basic values and attitudes and re-fashions them into the patterns of memory and meaning that re-present the past. ANZAC Day's cultural entrenchment is proof that the mythic transformation of this historical moment is almost complete. Waitangi Day, by contrast, remains a living issue whose meaning is yet to be settled.


THE LAST NOTES of The Last Post have faded into the dawn skies of ANZAC Day for another year. The words of Laurence Binyon’s poetic tribute, For the Fallen, have been intoned with due solemnity, and thousands of young New Zealanders, most of them blessedly untouched by war, have again repeated its final pledge: “We will remember them.”
Moments of sombre ceremony, in which old and young, past and present, are drawn together in the embrace of collective memorialisation, or mythos, are precious to all cultures. It is why, even in such a resolutely secular nation as New Zealand, christenings, marriages and funerals retain such enormous emotional power. And, almost certainly, it explains why sixty percent of New Zealanders say ANZAC Day means more to them than Waitangi Day.
But human memory is a most unreliable transmitter of truth. Indeed, what tends to get transmitted in ceremonies like the ones we engage in on ANZAC Day has almost nothing at all to do with historical reality.
Taken Binyon’s famous poem, for example.
Loaded upon that final, endlessly-quoted stanza of For the Fallen is all the consciousness of waste and horror that the peoples of the participating nations, ever since the guns fell silent in 1918, have brought to their assessment of World War One. The image conveyed in the words, “at the going down of the sun”, is not merely one of a descending star, but of something much closer to home: of countless fallen sons; a broken generation; the ending of an age.
And that is how mythos works. It takes our basic values and attitudes and re-fashions them into the patterns of memory and meaning that re-present the past.
Binyon’s poem, written in the thrilling weeks that followed the out-break of war in August 1914, and published a month later in The Times, was romantic nonsense.
Consider these lines:
Solemn the drums thrill: Death august and royal,
Sings sorrow up into immortal spheres.
There is music in the midst of desolation,
And a glory that shines upon her tears.
And then consider how all those thousands of young men, “straight of limb, true of eye, steady and aglow”, actually died. Choking on their own blood. Drowning in pools of stinking mud. Slowly, in agony, on the wire. The only music in no-man’s land was the staccato chatter of the machine-guns. Nothing there you’d call “august and royal”; no “glory that shines”; no one to dry the tears of eighteen year-old boys whose last word was almost always: “Mother.”
Binyon’s actual poem, written before World War One took on the hideous aspect that still appals us, bears no resemblance to the poem we recite on ANZAC Day. That poem was written by the men who came back, and by the mothers of the boys who didn’t. It was written by the old men who pondered the empty pews in the local church, the empty tables at the local pub, the empty positions in the local Rugby team.
Mythos wrote The Ode of Remembrance.
But mythos has not yet re-written Waitangi Day. Unlike ANZAC Day it has yet to congeal into ceremony and solemnity. Waitangi Day is still a living thing: it’s “truths” unsettled. As a nation, we are still working on the patterns of memory and meaning in which the signing of the Treaty of Waitangi will, eventually, be enmeshed.
In every community the grim obelisks stand, bearing the names of the fallen and registering the myriad futures that were never fulfilled. In the chill dawn of every ANZAC Day we have a duty to remember them. Not as the tragic, self-sacrificing heroes that mythos has turned them into, but as they really were: teenage boys who died far from home for old men’s dreams of empire and dominion.
And on the morning of Waitangi Day, filled as it always is with rancour and resentment, pride and protest, give thanks that New Zealand’s future is still ours to make.
This essay was originally published in The Dominion Post, The Waikato Times, The Taranaki Daily News, The Timaru Herald, The Otago Daily Times and The Greymouth Star of Friday, 26 April 2013.
Posted by Chris Trotter at 12:28

ANZAC Day is to me a depressing day, where a fair number of traditional New Zealenders remember those ancestors that died in lost battles. In some cases it appears New Zealand and Australian soldiers were used by the former colonial Motherland to make the ultimate sacrifice, where battles were ill prepared, poorly planned and never going to succeed.

As a migrant I am struggling to identify with this, as to me it rather appears to resemble a desperate effort to cling to some past, traditional ties with the UK, the monarchy and a bizarre belief that those that went into WW1 and later WW2 did so to fight for freedom and democracy.

There may have been a form of democracy in Britain, Australia and NZ then, but it was hardly as free and inclusive as some make us believe. Rather ANZACs joined in to defend not just their territories and families, but more so the British Motherland and the interests of the elite that ran and controlled economic, political and social affairs.

New Zealand today is a very different place, and with the large percentage of new New Zealanders of other ethnic and cultural backgrounds, not born here, and those being the second generation migrants, fewer and fewer will identify with ANZAC Day.

Waitangi Day is not taken seriously enough by too many, and one must fear, it will also lose more of its meaning. The Treaty and bicultural agreement of the past is also becoming less important, the more New Zealand society changes.

I see a New Zealand that is struggling to find any new and clear identity. The only thing that keeps the system here ticking away at present is the divisive, competitive, capitalist, commercial system, keeping all in interdependence. Only by enforcement of repressive law and the dependence of workers on the business owning and managing class, is this country run by an oligopoly.

A middle class is kept in check with a bondage to debt and job and income dependency, the upper class never had it better, and the lower class is hammered into total submission day by day, becoming totally disentitled and disowned.

So myths may keep some calm and focused, to me it is all rather irrelevant, sad and blood and honour type nostalgia I can well do without.

True. Wilfred Owen's 'What passing bell' would be a better poem to recite

During my schoolboy years I would attend Anzac parades at dawn. It seemed everybody's old man would be up and out in the dark, campaign medals clanking. The march to the cenotaph led by the grim diggers of the Great War, most wearing hats and with an overcoat carried over their arm, their medals pitifully few for the years of frontline service. Then followed the WW2 blokes, far more numerous as attrition had not set in. Returned men from Korea, Malaya brought up the rear. The padres were all returned men too. They had one thing in common, they were remembering their own mates. It was personal. The rest of us were onlookers that could never enter their realities. Afterwards the pubs and RSA did a good trade. By afternoon most households I knew had domestic disharmony brought on by half a day of grog on an empty gut, mates being brought home unannounced etc By nightfall I don't think there was an unthrashed kid in the street. My old man and my granduncles are long gone. Anzac has developed into a show with everyone remembering men they never knew and wearing their ribbons.
If war teaches anything its that evil does not limit itself, sooner or later it has to be overcome by a greater force, leaving the grim men to recall their lost friends and battle on in life. Ratbag politicians in all countries have got to be kept on a leash. We have our own homegrown ones with the Waitangi circus set to do divisive harm to this country. There's far too many onlookers.

That's a great memory from Mick. I've copied it for future reference

I'm over ANZAC day since wether we remember them or not they care or no not. We need something more relevant such as Leaky Home or Finance Company Colapse Day... Least We Forget... (the bastards).

there seems to be a revival of interest in ANZAC day from young people (as opposed to those of my generation who knew real ANZACS and had WW2 parents who have passed away?

From my readings (recently) I have gained the impression that in the past we made war with gusto!? Perhaps we are adapted in the same way that our immune systems are designed for a range of stresses no longer in our environment. Dr Livingstone was grabbed in the jaws of a lion and claimed he had an epiphany based on a reaction of complete calm and peace. In a way the ability to sacrifice is not death but survival?