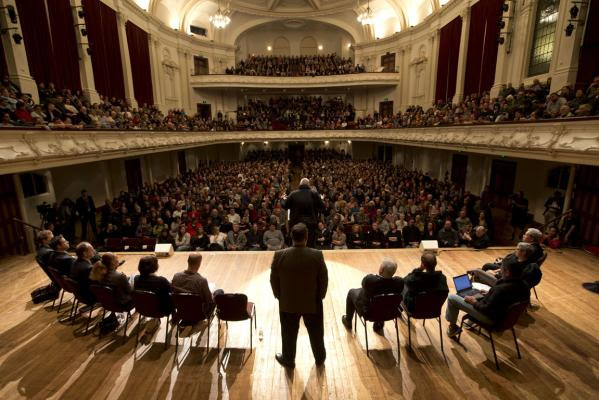 "You don't need a weatherman to know which way the wind blows" - Bob Dylan.

A SYMBOLIC VICTORY might have been won by John Key on Campbell Live last Wednesday, but last night, in the Auckland Town Hall, the victory won was very real. Last night, for the first time in decades, one of New Zealand's stately civic buildings found itself full-to-bursting with angry citizens.

You don't need a weatherman to tell you there's been a shift in the wind.

If the organisers of last night's event allow themselves to be guided by the quiet wisdom of Nicky Hager, it will go down in New Zealand political history as being not the end of a campaign against the GCSB Amendment Bill, but the beginning of a nationwide movement against New Zealand's continuing participation in the UKUSA/Echelon/Five Eyes Agreement.

Only amputation can sever New Zealand from the other four murderous fingers of the Anglo-Saxon fist. That will not be accomplished without pain, but when it is done this country will at last be free of American tutelage. Not even our anti-nuclear legislation could achieve that. No matter how angrily the Americans scolded us for denying entry to their warships, Waihopai kept on sending the signals intelligence to NSA headquarters in Ford Meade, Maryland.

Only by dismantling Waihopai, abolishing the GCSB and withdrawing New Zealand from the "Five Eyes" intelligence sharing protocols can we finally proclaim ourselves to be a free and independent South Pacific nation.

The energy unleashed in last night's meeting in the Auckland Town Hall, if harnessed intelligently, can lead us to that long cherished objective.

We have 15 months to make it happen.

The New Zealand nationalist poet, Allen Curnow, looking forward to the day when his little country would finally cease bowing and scraping to its various imperial masters, wrote:

Not I, some child, born in a marvellous year
Will learn the trick of standing upright here.

This posting is exclusive to the Bowalley Road blogsite.
Posted by Chris Trotter at 11:07

And if NZ can extricate itself from the Anglo-Saxon fist, where will it go and who with? China or North Korea Chris? With a population of 4.5 million we are just the population of a foreign small city.

'Requiem For a Red Dawn' was about New Zealand's search for a socialist future.

What did early man think as he discovered fire for the first time? I can burn somebody's arse to get my own way? Or did he correctly think I'm part of a new future? We will all be in this together,rightly or wrongly?

Let's do it. Let's make New Zealand our own!

Do we have to go anywhere? There are small countries out there that don't have protectors. And one thing the Chinese don't usually do is interfere in the internal affairs of other countries, at least not as blatantly as the Americans.

Is that the same Nicky Hager who published emails stolen from Don Brash? Oh yes I am sure he is worried about privacy.......

New Zealand is potentially the end and the beginning of the future of mankind.

Having watched David Shearer make a sprat of himself today during Question Time, I think we'll have extricate ourselves through a people's movement rather than a political party. We need the Internet-age equivalent of CND. Any suggestions how we can set that up?

Chris-please reprint for us the article you surely must have written in 2003 critical of Helen Clark's GCSB bill- you will recall, the one that 'wasn't fit for purpose-the one that helen has not so long ago talked about.

Is that the same Nicky Hager who published emails stolen from Don Brash? Oh yes I am sure he is worried about privacy.......

Ah, thanks for the reminder, yes indeed, Dr Brash certainly had "something to hide".

Paradoxically I'm certain ACT's rank and file are essentially 100% opposed to Key's Bill. All except for the quisling they put into the House to represent them.

Richard Christie-That's a very movable concept of morality that you have there-if you approve of the theft of information then it's ok-is that right? Are you saying that only people with something to hide should have any worry about being under surveillance? If you having nothing to hide then don't worry?
This is wise Nicky Hager who can stand up and proclaim that he doesn't want anyone to read his emails......

Chris
A few thousand disaffected people does not " a cause make"

Perhaps if the left had selected better champions people may have listened .

It appears you don't appreciate the difference between whistle-blowing on political duplicity by one of a politician's own team and the wholesale unsolicited surveillance of all citizens' communications and cyber-activity by state apparatus.

Would you care for me to locate a 10-year old so as to explain to you the difference?

Richard Christie-I do appreciate that you think that using stolen emails is ok if in your opinion the cause is ok but not if it happens on your own side. The idea that you are capable of brainwashing any of the 10 year olds in your neighbourhood is even more alarming.

Tiresome. Try another tack or desist.

Trolls are not tolerated at Bowalley Road.

Meh. Labour will get no traction at all while they are in self-destruct mode.

Forget the GCSB - the media will be jammed full over the next few weeks with talk about who will be the next Labour leader.

As long as that goes on, Key could "roger" a sheep live on stage and the audience would all be thinking "I'll bet that sheep belongs to Cunliffe...."

A provocative piece, one with which I am in 100% agreement.

However, I doubt our imperialist masters allow such an insubordinate act.

On the subject of Don Brash's emails and the Key/Banks tea party tape recording - these people are attempting to represent us using our money. As these people seek to attain the highest public offices in the land they should accept an extraordinarily intrusive level of scrutiny.

It seems offensive that they would expect us to pay for a public agency to monitor what we are doing when it is them who need to be watched to ensure they are acting in our interests.

Unless, of course, Chomsky is correct when he points out that from the perspective of the state the general population is the real enemy.

@ Jigsaw: you're assuming that the e-mails in question actually were stolen.....