John Key Ducks And Weaves His Way To A Symbolic Victory 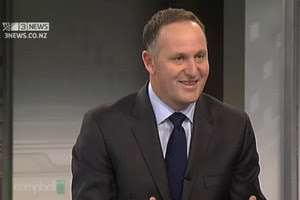 Smiling Assassin: In this televised clash of champions, it was the confident jut of the Prime Minister's jaw and his refusal to make even the slightest concession to the opponents of his GCSB Amendment Bill, that saw him emerge as the clear winner over TV3's John Campbell. Unfair, but indisputable.
IT’S SAD REALLY, this habit we have of treating politics as a contact sport. In other parts of the world the liveliest discussions and debates are generated by the ideas behind politics. Here in New Zealand there’s only ever one question: “Who won?”
We talk about our politics the way we talk about our Rugby. Which side got the most possession? Who had the better kickers? Which scrum proved the stronger? Who got up highest in the line-outs? We expect our leaders to outshine their opponents by running-in more tries and kicking more penalties. Ideally, the game of politics should produce a clear winner and a clear loser.
Last Wednesday’s noisy, but not particularly informative, interview between the Prime Minister, John Key, and TV3’s John Campbell, is a case in point.
Though the Government protested (some said too much) that the public cared more about the Snapper Catch than the GCSB Amendment Bill, the very fact that the Prime Minister more-or-less invited himself onto Campbell Live suggests a significant (and possibly rising?) level of public concern. Government supporters would, no doubt, respond that Campbell Live, by embarking on a journalistic road-trip to test whether Kiwis really did or did not care about the GCSB legislation, had itself become an major generator of that concern.
The scene was set for a lively encounter.
Much has been spoken and written about the stoush which ensued. The consensus seems to be that while the Prime Minister clearly got the better of Mr Campbell, his “win” owed a great deal more to the way he “handled” the interview than it did to any fair and dispassionate communication of the GCSB legislation’s content and consequences.
The word from Wellington (and it’s important to acknowledge here that all words from Wellington are best taken with a whole cellar-full of salt) is that with the screening of the first instalment of Campbell Live’s road-trip on Monday, 12 August, the men and women responsible for burnishing the Prime Minister’s image became seriously alarmed. The interviews recorded by TV3’s Rebecca Wright at the National Party’s annual conference in Nelson conveyed a disturbing message of Government arrogance, with the behaviour of the Prime Minister himself bordering on the downright contemptuous.
Not a good look.
By the screening of Tuesday’s instalment of the road-trip, the alarm of the Government’s spin doctors had grown considerably. Though the Prime Minister flatly denied the allegation when Mr Campbell put it to him on Wednesday night, other political observers have insisted that the National Party’s internal pollsters were already registering a shift in public sentiment against Mr Key’s ministry.
Something had to be done.
Getting Mr Key on to Campbell Live on Wednesday evening would, if nothing else, arrest the gathering momentum of the programme’s journalistic crusade. It might also lure Mr Campbell into an attempt to humiliate his guest, live, on nationwide television. The Prime Minister was thus given a chance to spring a trap on his adversary. If Mr Campbell could be the one humiliated, live, on nationwide television, then Mr Key could claim vindication – not only for himself, but for his government’s whole approach to national security in general and to the GCSB legislation in particular.
With so much now riding on the outcome of the Wednesday encounter, the two Johns had become, in effect, the champions of the opposing sides in the GCSB debate. “Champions”, that is, in the original and archaic sense of the word. Hardened warriors, the best either side has to offer, meeting to do battle, with the losing side vacating the field and acknowledging the victory of their enemy.
No pressure, then.
In France or Germany the clash would have been cerebral: a fascinating battle of intellects as the whys and wherefores, pros and cons, of the modern state’s growing need (desire?) for surveillance and security were teased out and debated.
But ours is not a nation that places much stock in virtuoso displays of intellectual prowess. What we admire is the confident tilt of a protagonist’s chin; the impudent glint in his eye; and the sheer, bare-faced cheek of his replies. The winner of such an encounter, at least in Kiwi eyes, is the player who ducks and weaves, who sells his opponent the dummy-pass and then slips through the floundering defence for yet another five points.
And that is what New Zealand saw on Wednesday night. When Mr Key was through with him, Mr Campbell resembled one of those panting, slump-shouldered, prop-forwards for whom the Ref’s final whistle brings nothing but blessed relief.
A symbolic defeat, then, for those opposing the growth of the surveillance state, but not, perhaps, for our democracy. Politics has always been a surrogate for organised violence. Better metaphorical blood on the TV studio floor, than real blood – in the streets.
This essay was originally published in The Press of Tuesday, 20 August 2013.
Posted by Chris Trotter at 09:00

No matter how good Campbell is at chess, when Playing a pigeon like Key, he is on a hiding to nothing, as the pigeon will knock over the pieces, crap on the board and strut around like he won anyway.

It's a great meme i never wrote, but seemd rather apt.

Wrong interviewer -under a time constraint due to our tabloid TV. Mind you I suspect Pam Corkery woulda wrung him out and hung him out to dry :-).

OBTW WTF did all the references to Helen Clark have to do with anything but pitch to wavering nat voters?

Key demonstrated what a puppet muppet he is to his spin meisters.

Left to his own he is very shonkey.

Campbell got ambushed (shades of Clark and maize) by a very well trained seal.

Key revealed himself as as the complete phony that he is.

The urgency he has about this proposed legislation suggests he has something to hide. Probably his involvement with the dot com fiasco.

Key needs to cover his tracks back to his hollywood and wall street cronies before NZ becvomes another US State.

OBTW WTF did all the references to Helen Clark have to do with anything but pitch to wavering nat voters?

Key demonstrated what a puppet muppet he is to his spin meisters.

Left to his own he is very shonkey.

Campbell got ambushed (shades of Clark and maize) by a very well trained seal.

Key revealed himself as as the complete phony that he is.

The urgency he has about this proposed legislation suggests he has something to hide. Probably his involvement with the dot com fiasco.

Key needs to cover his tracks back to his hollywood and wall street cronies before NZ becvomes another US State.

Key won?
On a verbal assault basis maybe.
On a rational reasonable basis never.
He did not answer questions.

OBTW WTF were all the references to Helen Clark about?
Worry about wavering Nat supporter

Why the urgency over this bill?

Key has something to hide.

Probably his involvement with the dot com fiasco.

Shonkey will want to cover his tracks back to his cronies in Hollywood, Wall Street, Washington.

That Key bothered turning up on CL speaks volumes.
His US spinmeisters must have been concerned that they might lose control of a vassal state.

Key acts in the interests of USA cronies not New Zealanders.

John Key and his arrogance disgusts me.

@PeterP and Flying Tortiose, yep you are so right. Our Johnny works only for his masters not us. Our democracy is a farce!

I don't watch the infomercials that are disguised as 'news' here. Ye gods! Even the Simpsons on Ch4 are more enlightening!

The sooner our Johnny is moved on the better for NZ. The last thing NZ needs is a PM who is a Banking parasite.

Ahh yes, France and Germany, if only our level of intellectual discourse were as lofty as that of those two nations.

Then again, France also committed an act of terrorism against us and well, the less said about Germany the better eh? Lest we forget.