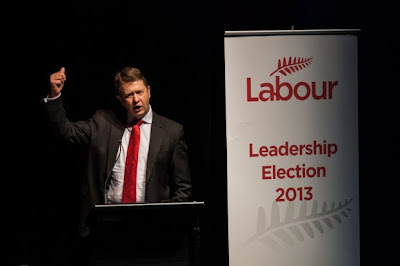 The Unacceptable Face Of Labour? The right-wing members of Labour’s Caucus who have set their faces against a turn to the left will not be swayed by the wishes of the party’s rank-and-file, or the votes of its trade union affiliates. They will vote with only one intent: to prevent David Cunliffe becoming Labour’s leader.
IF IT’S ANYONE BUT CUNLIFFE what will happen to the Labour Party? It’s a question many Labour members will be asking themselves as the hours between wondering and knowing dwindle.
What began with a dizzying head-rush of hope and enthusiasm is ending in doubt and worry.
At the heart of the membership’s concern is the likely behaviour of the Labour caucus. Many will be wondering why, when the new rules were being drafted, so much influence (40 percent) was reposed in Labour’s parliamentary delegation. Especially when the British Labour Party gives its MPs only one third of the say in who becomes leader.
As the contest has progressed, the simple mathematics of the voting system has driven home the alarming fact that each MP, in their own right, wields a vote worth 1.2 percent. Just 34 individuals, out of a party membership of around 8,000 ordinary members, will account for 40 percent of the outcome.
In the first flush of their democratic revolution, the rank-and-file of the Labour Party rather naively anticipated “their” MPs being guided by a mixture of the party’s will and the sentiment of the much larger group of New Zealanders who, while not holding membership cards, nevertheless vote for the Labour Party in election after election.
These are, after all, the people who put the Labour MPs where they are. Why wouldn’t Labour’s caucus pay heed to their wishes?
It’s a very good question. But, then, another very good question was: “Why didn’t the Labour caucus heed the wishes of the party membership in 2011? Why were they willing to squander 20 precious months on a man who, while possessing many impressive qualities, was demonstrably unsuited to the role of Labour leader?
The answer, of course, is because, for a variety of reasons, a majority of the Labour caucus was unwilling to see David Cunliffe assume the leadership of the Labour Party.
Mr Cunliffe’s enemies have gone to extraordinary lengths to persuade the news media that their adamant opposition is grounded in the man’s personal shortcomings. This is not the case. The vicious attacks launched against Mr Cunliffe by his ostensible “colleagues” are driven by the oldest of political motives.
These include the narrow political interests of those who have identified Mr Cunliffe as either a threat to their present position within the Labour caucus, or as a barrier to their further personal advancement. Indeed, the more obvious it becomes that Mr Cunliffe really is the choice of the party rank-and-file, and of Labour voters generally, the bigger threat and barrier he looms.
There is also a broader apprehension among Mr Cunliffe’s enemies that he (and the party organisation) will require the Opposition to adopt a more unequivocally social-democratic ideological stance. But, such a position has already been condemned by Mr Cunliffe’s critics as “naïve and stupid”. This is because a surprisingly large number of Labour’s Caucus no longer believe in social democracy (let alone the “democratic socialism” enshrined in their party’s constitution). To them, Labour is simply the party which replaces National. They want no part of a labour movement that sees itself as a direct and progressive challenge to the ambitions of the Right.
The right-wing members of Labour’s Caucus who think this way will not be swayed by the wishes of the party’s rank-and-file, or the votes of its trade union affiliates. They will vote with only one intent: to prevent David Cunliffe becoming Labour’s leader.
And, if enough of them think like this – they’ll succeed.
Should that be the outcome, the scale of disappointment and disillusionment within the Labour Party’s ranks will be unprecedented. Many will do their best to accept another Cunliffe defeat with a brave and loyal face. Others will simply turn away in disgust. A few will defect to the Greens – or even Mana.
But, for most, it will be taken as proof that participating in politics is no different from participating in casino gambling: the House always wins.
This essay was originally published in The Dominion Post, The Waikato Times, The Taranaki Daily News, The Timaru Herald, The Otago Daily Times and The Greymouth Star of Friday, 13 September 2013.
Posted by Chris Trotter at 08:12

What does'Progressive' mean?
'Agrees with me?'
Rather a self congratulatory term, don't you think?

In any case, you are missing an important point. Once you are elected to parliament, you very quickly become aware of the legal and practical limitations on what you can do. Especially the fiscal limitations. This goes double if you are in government.

If you are a party member but not an MP, you can come up with all sorts of schemes that sound great (to you), and start movements promoting them.
'Free stuff for everyone!'
You are not responsible for implementing the scheme, and have no real idea of how possible it is. You can't understand why the MPs aren't implementing your scheme. Who do they think they are, ignoring the rank and file?
Meanwhile the MPs are thinking 'who came up with this shit?' , and trying to have as little as possible to do with the people who came up with the scheme.

Do you possess a dictionary? No, silly question.

As silly as your assessment of what happens when someone gets to Parliament.

It's not what they find there that makes Members of Parliament good or bad, but what they take in with them.

Do you really think that Mickey Savage of Norman Kirk, or even Roger Douglas, was ever deterred by "the legal and practical limitations"?

The only thing that prevents the world being changed are people who say you can't change the world.

In comparison,the man favoured by a large number of members has been in parliament since 1999, and has successfully held ministerial portfolios. He cannot be totally unfamiliar with the art of the possible.

Furthermore, the idea that "caucus knows best" has put Labour in the position where, after 20 months in the doldrums, it is choosing a new leader just a year out from an election.

Firstly we need to wait until the winner is declared before criticising.

Give the newbie a chance to settle in and then see what they offer. The real race is between Cunliffe and Robertson.

With the decimation of the Unions Labour has destroyed it's main source of funding and now must get that funding from similar sources as the Gnats do. Consequently their policies tend to favour those who pay the piper. Even if that is to the detriment of their traditional support.

I noted that in three terms that they were in power they never re-instated the money that was ripped from the poorest people in NZ by Jenny Shipley. By that simple process they could have gained much ground from their supporters but instead they chose to ignore that basic fact. That made them Gnatlite.

Chris, you seem not to have noticed that things have changed since the 60's. Since the advent of Thatcher et al, their economic policy has become the Gold Standard for running a country. All else is folly. The evidence is there for all to see in Greece, Spain, France or possibly with your 'dream team' - Venezuela.

People have also moved on. Your pathetic 8000 members is a reflection of that fact. No longer are 'The Workers' union members. They're now owner/operator small businessmen in white vans. Doing very nicely, thank you.

If Labour is to prosper it has to go the Blair route and assemble a viable alternative to National.

Labour's membership fell (from 85,000 ordinary members in 1984 to roughly 8,000 today) as a result of the parliamentary party abandoning its principles and introducing neoliberal policies it had not announced and which the party itself had not endorsed.

Labour's membership will expand exponentially if people come to believe that the neoliberal project no longer forms any part of the party's message.

The number of small businesses in NZ is less than 250,000 - out of a workforce of nearly two million.

Take a drive through South or West Auckland sometime - and then come back and admit that we are not all capitalists - not yet.

Not by a long shot

"their economic policy has become the Gold Standard for running a country."

What??? It's responsible for the horrendous mess the world economy finds itself in these days morelike. Some standard, but more dross than gold :-).

Anonymous@11:05AM again
- Fair comment re 'Progressive' , I meant to say that the term means what people want it to - no one would describe themselves as 'Regressive'. I admit I didn't express that very well.

I stand by the rest of the post.
It is not an admonishment against trying to change anything, but a warning against the difficulties in doing so. Can you really deny that this is a fair explanation of much of what happens (or doesn't) in parliament?

Savage, Douglas and Kirk worked within legal and fiscal limitations . There great strength was in seeing beyond others what WAS possible, and doing it.
(Of course, everything achieved looks possible in hindsight).
And personally I think Kirk is overrated. He has the 'Kennedy Effect' about him - he died in office, relatively soon after election, and relatively young , so people project their own favourite' might have beens' onto him.