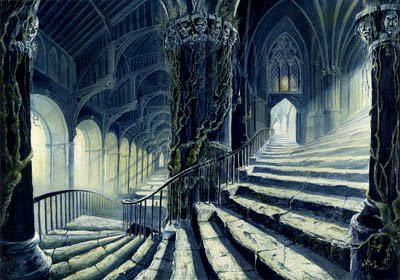 Stairway To Hell: Like the decrepit dynasty at the heart of Mervyn Peake's grotesque fantasy novel, Gormenghast, the "Heads" at TVNZ's Auckland sprawling headquarters lost track of what was going on within their immense domain.


GORMENGHAST is one novel of a hell. Imagine J.R.R. Tolkien on acid, C.S. Lewis on speed, and you’ll hardly have made a mental dent in Mervyn Peake’s grotesque trilogy. I won’t spoil the books by giving away the plot in detail. Suffice to say that Gormenghast is an immense castle. So immense that the decrepit dynasty of Groan, to whom it ostensibly belongs, cannot possibly keep track of everything that goes on within its walls.
Watching Patrick Gower unfold (with ever increasing glee) the activities of Shane Taurima and his colleagues at TVNZ headquarters in Auckland, I couldn’t help being reminded of Peake’s gothic fantasy.
Like Gormenghast Castle, the sprawling TVNZ site had somehow spawned a secret cell of resistance. How was that possible? Because, like the Groans, TVNZ’s bosses appear to have become preoccupied with “the obscure and esoteric tenets” of their governance functions.
For the most part this involves large numbers of middle managers running up and down the great staircase that dominates TVNZ’s Auckland headquarters, ducking into tiny offices, and exchanging information with other middle managers who undertake to pass it on to yet more middle managers. Only very occasionally (or by accident) does this information ever trickle down to the people who actually make the television programmes we see on air.
Only very rarely do all the various functionaries of TVNZ gather together. And when they do it is almost always to pay homage to something called “The Ratings”. These are collections of viewing data gathered according to specifications laid down at some point in the far distant past but which are now almost completely irrelevant to the way people use their television sets, Sky decoders, PCs and iPhones.
The grand interpreters of The Ratings are the “Heads” (Head of Programming, Head of Marketing, Head of Sport, Head of News and Current Affairs). Their job is to advise the CEO who, in his turn, advises “The Board”.

TVNZ HQ - The higher you climb the less you know.
It is widely acknowledged within the sprawling edifice of TVNZ that the higher you climb in the organisation, the less you know about television. At the level of the Board, for example, virtually nothing is known about the rights and duties of a state broadcaster.
The similarities between TVNZ’s top brass, the Groans of Gormenghast, and the peculiar determination of both elites to cling to the “obscure and esoteric tenets” of their respective institutions are quite uncanny.
Certainly, it is very difficult to fathom how else Shane Taurima and his colleagues could run what amounted to a Labour Party branch out of the Maori and Pacific Television Unit – practically under the noses of TVNZ’s senior executives – without employing something like the Gormenghast metaphor.
And, really, can you blame them? It has been years since TVNZ management demonstrated the slightest respect for the news and current affairs obligations of what is still, officially, the people’s television network. They are required to operate in a culture of contempt for the principles of public service television – an attitude epitomised by the TVNZ CEO who claimed Police Ten-Seven as an example of Maori programming by pointing to the large number of young Maori men and women arrested on the show!
The atmosphere broadcasters are required to inhale at TVNZ may not be party political, but it is unquestionably ideological. Since 1989, when Labour removed all references to the public good from the Broadcasting Act, TVNZ has understood that its real (albeit unwritten) charter mandates the relentless promotion to New Zealanders of the virtues of neoliberalism, while rigorously eliminating all those programming options capable of constructing an alternative worldview.
Mr Taurima’s and his Maori and Pacific Television Unit colleagues’ biggest mistake – apart from believing that they could ever get away with behaving in such a nakedly party political fashion – was to hang their hats on securing the election of a Labour-led Government.
In the nine years that Helen Clark’s Labour Party governed New Zealand no serious effort was made to root-out the pernicious operational culture at TVNZ or, indeed, to address the manifold defects of this country’s recklessly deregulated media industry.
Even had TV3’s Patrick Gower not exposed Shane “Steerpike” Taurima’s cell of resistance in the bowels of the TVNZ Gormenghast, a change of government would only have confirmed for him The Who’s immortal line:
“Meet the new boss – same as the old boss.”
This essay was originally published in The Waikato Times, The Taranaki Daily News, The Timaru Herald, The Otago Daily Times and The Greymouth Star of Friday, 21 February 2014.
Posted by Chris Trotter at 08:14

Chris, you have described a standard corporate organisation and the internal disconnects quite accurately. During the 90s we all got thoroughly bored with "corporate mission statements" which were supposed to align organisations staff with the desire goals....that too failed because most of it was in Harvard Business School MBA speak.

I once tried to read Gormenghast, got tired very quickly and stopped. Maybe that is why an MBA held no appeal. What I have noticed in business is that the constant restructures designed to make things more effective and efficient, and to drive further profitability (the neo lib dream in a nutshell)seem to create a stasis in which none of the goals are ever realised. From an organisational viewpoint it is not surprising that the head has little real idea what the body is doing, and has no visibility of malign cells: I put that down to the concept of managerial expertise divorced from operational experience and organisational memory.

The reason the managers at TVNZ know not what their organisation does is that they belong to a class of managers who are really a priesthood produced by the business schools. Actually understanding the work at the coal face, the language of the business in which they are engaged, the institutional memory etc are outside of their limited expertise, and outside of their desire to know. In short their whole value is proscribed by their training and consequent meal ticket. They and their fat salaries are a tax and a cancer upon the organisations to which they belong.

Managerialism. It's everywhere. People come into an organisation new – and obviously have to make changes to justify the promotion. It doesn't matter what the changes are, as long as you can be seen to be doing something. Similarly in low decile secondary schools principals come and go, they flail around making changes, they get noticed by the right people and they're off onward and upward having improved nothing. Except in the private sector of course they award each other huge pay increases for doing nothing. :-)

PS, does anyone know what's happened to Bryan Gould's website? Can't get hold of it. I suppose worst-case scenario he could have died.

I think that ugly dog TVNZ should be got rid or by the taxpayers.(Also, it should never have had such a creepy thing as a so-called "maori and pacific unit".)

If no one will buy it just close it down.

Define "creepy". Why shouldn't there be such a unit? I forgot of course – we're one people – yes. Who the hell else is going to produce programs with Pacific islands and Maori content Barry? You?

Oh, how Kiwis were suckered in. Want a refresher, watch Sleeping Dogs, not everyone was fooled.

So, how many voting for National again?

Who actually watches it?

The only New Zealand media I regularly consume are this blog and a handful of other blogs. I only read foreign newspapers and consume foreign internet TV and Netflix.

I can't see any reason to watch any of our podunk TV stations. The government can privatise it for all I care.

Peake always settled pictures of his characters so steadfastly in your head. Such an acute visual sense. I often think Of Titus's headmaster's agonising teeth problems as my own disintegrate and take up more space in my preoccupations. The knells of decline.

Way the Maori dude being pilloried for his claimed misuse of tax payer funded resources for political gains i find hypocritic as his ex employer had not found it needed to air the main news of the day, Labours appointment of Matt Mc Carten,as the new Chief of Staff.Every other news outline radio station was their headline run.

Who appoints these heads of controllers to decide what is important news in our government controlled news tv.