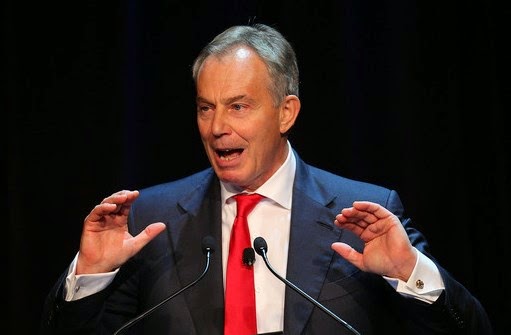 Purveyor of Hot Air Since 1997: Tony Blair's latest essay on the Middle East was so bad that even London's Tory mayor, Boris Johnson, told him to "put a sock in it". The terms "self-deluding" and "self-serving" are barely adequate to describe Blair's bilious bloviating.

FOR NEARLY A WEEK the world has been retching over Tony Blair’s essay on Iraq. Having read it, even London’s Tory Mayor, Boris Johnson, curtly instructed him to “put a sock in it”.


This global revulsion is not solely attributable to the fact that Mr Blair, the second-most-culpable person associated with the bloody Iraqi omnishambles, is still presuming to tell the world how to fix it – though that would be reason enough. It’s because his recipe for peace and progress in the Middle East is exactly the same as it was back in 2003. Invasion, occupation and the imposition of Western values.
The formula that worked so tremendously well the first time!
According to Mr Blair, the Islamic world, being “inherently unstable”, cannot actually be damaged by anything “we” (by which he presumably means the Anglo-American imperium and its assorted hangers-on) do to it. Iraq, Libya, Syria: they’d all have gone bad regardless of “our” actions. None of it is down to “us”.
“The problems of the Middle East are the product of bad systems of politics mixed with a bad abuse of religion going back over a long time. Poor governance, weak institutions, oppressive rule and a failure within parts of Islam to work out a sensible relationship between religion and Government have combined to create countries which are simply unprepared for the modern world. Put into that mix, young populations with no effective job opportunities and education systems that do not correspond to the requirements of the future economy, and you have a toxic, inherently unstable matrix of factors that was always – repeat always - going to lead to a revolution.”
So, you see, the “international community” has nothing to reproach itself for when it comes to the Middle East. Those fine fellows, Sykes and Picot, drawing lines all over the maps of the dying Ottoman Empire back in 1916, were entirely blameless. War, after all, is war. And if you’re foolish enough to thrown in with the losing side, then you can hardly complain when your territory is carved up like a (ahem) Turkey.
Yes, yes, yes – alright! His Majesty’s Government may have encouraged Colonel T.E. Lawrence to stir up the Arabs against the Turks by promising them their own independent kingdom if they threw in with the winning side. But that was a wartime promise – and everyone knows (or should know) what a wartime promise is worth.
And, no, on balance, Mr Blair clearly does not agree that the Royal Air Force’s deployment of poison gas bombs against rebellious Iraqi tribespeople in the 1920s and 30s is in any way evidence of “poor governance” or “oppressive rule” on the part of the British Empire. Any more than the 1918 Balfour Declaration, which, by promising the Jewish people their own homeland in Palestine laid the foundations for the ongoing Arab-Israeli conflict, could be described as the product of “bad systems of politics mixed with a bad abuse of religion”.
Mr Blair’s essay is not burdened with such irrelevant historical detail. “We have to put aside the differences of the past”, he warns, “and act now to save the future.”
Brave words. And yet, among the 2,833 words of Mr Blair’s bilious essay two very important words are missing – Saudi Arabia.
Which is really rather odd, because it is the Wahhabism of the Saudis, coupled with the Kingdom’s extraordinary oil wealth, which is inspiring, resourcing and providing diplomatic cover for terrorist militia all over the Middle East. 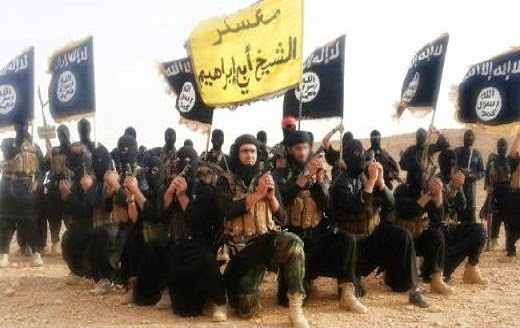 A Caliphate of the Righteous? Islamic State of Iraq and Syria (ISIS) jihadists pose for the cameras. While Western Imperialism continues to dictate the fate of the Middle East, ISIS will never want for recruits.
If “saving the future” does not involve imposing UN sanctions upon the Saudis. If it does not include the “international community” stepping away from the feudal potentates and military dictators it has been pleased to call “moderate Arab opinion”. If it is not about openly sponsoring comprehensive democratic reforms. Then, Mr Blair’s self-righteous and self-serving exhortations notwithstanding, the Islamic State of Iraq and Syria (ISIS) and its shimmering mirage of a borderless caliphate of the righteous, will never lack for followers.
This essay was originally published in The Dominion Post, The Waikato Times, The Taranaki Daily News, The Timaru Herald, The Otago Daily Times and The Greymouth Star of Friday, June 20, 2014.
Posted by Chris Trotter at 11:07

The relative stability of the region once provided by strongmen, such as Gaddafi, Mubarak, and Saddam Hussein has been destroyed by intervention from George Bush, Tony Blair and Barrack Obama with other western nations including NZ playing supporting roles.

As a result the region has descended into a bloodbath fueled by tribal sectarian rivalries, and more importantly by the Sunni – Shiite Islamic religious divide, where each group views the other as apostates and infidels.

For the West, "bombing the bad guys where ever we find them" no longer sounds like a sensible foreign policy, assuming it ever was.

We are best to leave them alone to settle their own differences as they see best, and limit our response to humanitarian aid where possible.

Tony Blair has always left me cold, his leadership raised the fundamental question of how had British Labour become so captured by the Oxbridge educated classes? Then his bilious wife touring here and displaying an appalling level of geographic knowledge. If you have doubts about the importance of where the Blairs came from you need to look at the allegiances they forge, it certainly is not with Joe Average redundant worker of Widnes.

Max Keiser recently reckoned that for every soldier killed in Iraq Blair had made $25000 in fees for enterprises associated with the conflict. How true this is I dont know but he certainly bears a lot of responsibility for the deaths of Iraqis and servicemen deployed merely on the basis of his tacit support of a war based upon spurious premises: he knew it was about oil and dressed it up as otherwise. A bigot and hypocrite.

While Brendan isn't telling me anything I don't know, I find it so refreshing to agree with his comments that I must comment about it :-).

So even when Blair tries to spin the situation, he is effectively saying that thousands of western and hundreds of thousands of Iraqi lives were lost, and trillions of dollars wasted just to end up in the same place if there wasn't any intervention.

Saudi Arabia is a major source of the troubles as they actively fund, arm and encourage the militant islamist groups. But I don't see the US or UK starting a trade embargo with Saudi in the near future.

I find myself in agreement with both Brendan and Guerilla Surgeon.

But we better stop agreeing before Blair claims this as yet another of his achievements.

Those who knew Britain in the 60s and 70s may recall the entertainer, Lionel Blair and his dance troupe.

Shortly after "Nu Labour" took office in 1997, a left-wing friend in London started referring to the new government dismissively as "Lionel Blair and the Dancers".

However, neither she nor I imagined the dance of death that would ensue.

I certainly had given up on ever seeing such a comment from Brendan. Its refreshing to see.

You may have noticed on Obama's speech about intervention. Something to the effect of the Iraq war's effect on the American psyche blah blah 4500 troops lost blah blah. Not one mention of the effect on Iraq – the hundreds of thousands killed, the complete stuff of infrastructure et cetera et cetera. If I was an Iraqi reading this I would be livid. No wonder America is hated across much of the world.

Bloody hell, I agree too, with all and Chris, our esteemed sage.
Let's get back to our Labour leader though .......
Perhaps not.
No Blair is the pits. Was a Born Again type, then became a Catholic! The Pope should impeach him or whatever they do. Least he's not a paedophile I guess. Or then again .....

Your point is well made.

But Iraqis won't get to vote in the US mid-terms.

I actually think the Yanks should bomb the shit out of ISIS.

I didn't agree with the invasion of Iraq, but what other method of defeating ISIS is there?

Why is it the US's resposibility to defeat ISIS?

How would the United States or any other western country benefit from the defeat of one bunch of fanatics and the triumph of another?

Whatever the West does or does not do, there is likely to be a degree of blow-back in the form of terrorism.

But the more the West gets involved militarily, the worse that blow-back is likely to be.

Moreover, anything the US does
militarily is likely to end with even more deaths of innocents, more outrage and more blow-back.