Love Lifts Us Up: Thoughts From The Green Party's Campaign Launch. 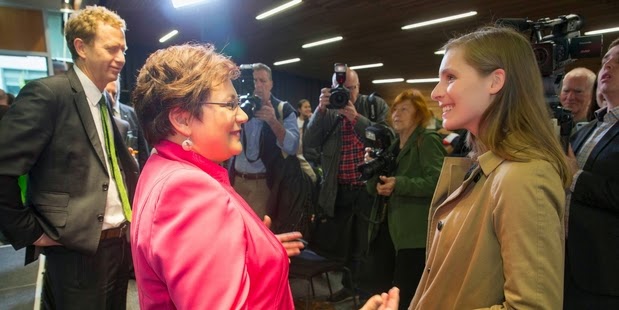 Super Luminaries: Greens co-leader chats with Man Booker prize-winner Eleanor Catton who delivered a moving endorsement of "Love New Zealand - Party Vote Green" at the party's campaign launch on Sunday 17 August 2014. Photo by Peter Meecham.
NO ONE WAS QUITE SURE how he did it. Somehow Bob Harvey had persuaded the owners of the rights to Joe Cocker’s Up Where We Belong to authorize its use as the New Zealand Labour Party’s 1984 campaign anthem. The theme song from An Officer and a Gentleman had, of course, been enormously popular, so arranging for the David Lange-led Labour Party to make its pitch to the New Zealand electorate over its soaring melody and aspirational lyrics was a coup of no mean proportions.
But it was much more than that. Joe Cocker’s song perfectly matched the mood of the times. For nine long years, through Carless Days, Think Big, Olympic Boycotts, Springbok Tours and the Wage and Price Freeze the New Zealand people had borne both the curses and the blessings of Sir Robert Muldoon’s leadership with stoical endurance. But, by the winter of 1984, the patience of two-thirds of the population had been exhausted.
David Lange knew it and with oratory every bit as uplifting as Joe Cocker’s song he offered the voters the vision of a better New Zealand where consensus would replace confrontation and the cramped orthodoxies of a world that was fast disappearing would give way to new ideas, new opportunities and new freedoms. In the famous leaders’ debate, when, in the closing moments, Lange reached out to Sir Robert and assured him that any contribution he wished to make to this new New Zealand would not be scorned, it brought tears to the old tusker’s eyes and prompted his astonishing rejoinder: “I love you too, Mr Lange.”
Love lifts us up where we belong – and then some!

﻿
I’m wondering if we might not be heading into another election where Love lifts a new government into power. Rather appropriately, I suppose, the thought occurred to me at the campaign launch of the Greens.
Ever since the Green Party entered Parliament in 1999 it’s MPs have attempted to prove that politics does not need to be “dirty”. That it is possible to debate issues rationally – without rancour. And now, a month out from polling day, and with the National Party disintegrating before our eyes like a vampire in the sun, the Greens are asking us all to “Love New Zealand”.
This is not a mere feel-good exhortation, either, but an invitation to the 3 percent of New Zealanders who earn more than $140,000 to put their money where the hungry mouths of 200,000 children are. The Greens proposed new top tax-rate of 40 percent is to be devoted exclusively to the elimination of child poverty in New Zealand. A case of not only sharing the love, but the wealth as well.
It was a courageous speech that the Greens’ co-leader Metiria Turei gave. Indeed, it filled in the gaps that were so noticeable in David Cunliffe’s speech to the Labour Party faithful last weekend. Any words concerning the fate of the children of beneficiaries and what might be done for them were conspicuous by their absence at Labour’s campaign launch, so it was reassuring to hear them voiced loud and clear to the 300-400 people crammed into the auditorium at Auckland’s AUT campus.
Reassuring, also, to hear the words of endorsement penned by New Zealand’s award-winning young novelist, Eleanor Catton. Her speech was as moving and as evocative as any I have heard in 30 years of attending such occasions.
The sneak preview provided by the organisers of the Green Party’s opening political broadcast made it clear just how seriously the party is committed to remaining upbeat and positive. Russel Norman and Turei have both been used to good effect, delivering their party’s messages with energy and conviction.
The most telling moment in this broadcast – at least for me – came when Turei and her daughter, Piupiu, are walking along the beach at Piha and the proud mother talks about making sure that this simple pleasure remains for her children – and grandchildren – to enjoy. The look Piupiu shoots her mother will be familiar to all the parents of teenage daughters. The “Aw, Mum!” moment is so natural and so real that it steals your heart away completely.
If the revelations mounting up against the National Party continue into the election campaign proper, then the voters will very quickly become sick of the stench of “dirty politics”. Like people forced to spend too long in an abattoir, they will emerge into the daylight desperate to fill their lungs with clean, fresh air. And quite serendipitously,  that’s exactly what the Greens’ “Love New Zealand” campaign (along with Labour’s “Vote Positive”) aims to provide: relief from the odours of what Nicky Hager calls “the pit”.
A nation grown weary of sleaze and tired of being manipulated may yet decide to award a decisive election victory to an Opposition coalition determined to prove how much better New Zealand could be with “cleaner, fairer and smarter” policies.
In the immortal words of The Beatles: “All you need is love.”

This essay was originally posted on The Daily Blog of Monday, 18 August 2014.
Posted by Chris Trotter at 19:58

'I love you too, Mr Lange'. Muldoon was being sarcastic, and he was right to be. Brian Edwards always represented it as an admission of defeat, if not madness. I think it was the purest salient truth about Labour's fake front back then--consensus and 'Save Rail'. Muldoon, the last, flawed as poss, leader of the '35 consensus at least could smell shit in its presence.

"offered the voters the vision of a better New Zealand where consensus would replace confrontation and the cramped orthodoxies of a world that was fast disappearing would give way to new ideas, new opportunities and new freedoms"

Lied about the first, the second was gonna happen no matter what.

I like the way the Greens have been unrelentingly bold in all their policy announcements up to now, for example, spending $10 billion on public transport options over ten years. It shows guts which I think strikes a chord with a lot of people right now.

Yes all very lovely but they are not in government yet so unfortunately, even they will stoop to pick up turds to throw if they have too once at the sharp end. Unless they are not human.
And wasn't Hager a Green member? Is he still?

On the positive side I could see Green moving right, towards the centre if they get a taste of power.

Another hitch will be the Dotty-Commie party which this morning Mr Cunliff confirmed he may need the votes of. If so, they will hold the balance of power and imagine that: The German crim holding the pin. Or Winston? Messy and every chance of lasting only a year. That could end MMP. Hardly what the Greens want.

Muldoon actually said ‘I love you, Mr Lange’ and the sarcastic tone was fairly obvious. The tears were almost certainly tears of rage on his defeat by an opponent he consistently underrated.

The left has no public champion in this election and no organising force. If the right loses, it will be defeated by hydra-headed opponents, of which the most effective to date are unelected and not offering themselves for election. Fingers crossed, then, for what happens afterwards.

I must say, I've always regarded the Greens is far too middle-class, but they are looking better and better considering that they might have some restraining effect on Labour's right wing. And they look relatively clean :-). Can't quite forgive Mana for going with Dotcom.

With Labour allocating just $200m to ALL supporting party policies, that will curtain anything the Greens plan to do by around 95%.

Effectively, their policies have just been neutered.

"Effectively, their policies have just been neutered."

Depends entirely on how many seats they get. Labour did say that they would change their own policies if they needed to accommodate smaller parties more.