Murder And The Media: The Relentless Pursuit Of Pain And Pathos. 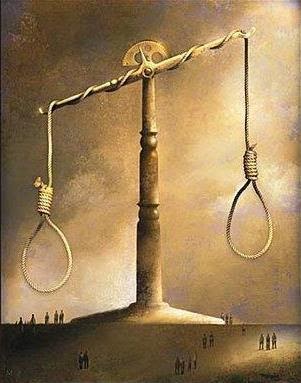 Alternative Sources Of Pain And Pathos: With the end of capital punishment, the news media entered into a new relationship with the ill-fated “cast” of the standard homicide case.
VERY FEW PEOPLE under the age of seventy will remember Caryl Chessman. His execution in the San Quentin gas chamber on 2 May 1960 was the occasion for an international outpouring of condemnation and disgust. The good and the great of the United States (from Aldous Huxley and Norman Mailer to the former First Lady, Eleanor Roosevelt) had appealed for clemency, but the State of California killed him anyway. Not for murder, mind, but for robbery, kidnapping and rape. The Supreme Court of the State of California had confirmed Chessman as the notorious “Red Light Bandit”. He’d managed to keep the cyanide out of the hole for 11 long years through numerous appeals and stays of execution, but California got him in the end.
The execution of Chessman unleashed a wave of popular revulsion against the death penalty in the United States. Over the course of the succeeding decade-and-a-half, state after state either abolished sentences of death altogether, or operated as if they had by commuting them to life imprisonment.
Not in the Deep South, of course, where the death penalty operated as an unacknowledged form of judicial terrorism against the black population of the old Confederacy. So extreme was the sexual psycho-pathology of the Southern Baptist male that Black American men were as frequently put to death for rape as they were for murder. The alleged “defilement” of a white woman by a black man drove Southern juries (and lynch mobs) into murderous frenzies.
With debate still raging in the lengthening shadow of Chessman’s execution, New Zealand finally rid itself of the death penalty in 1961. The legislation was made the subject of a conscience vote because in the years since 1949, when the First National Government had restored the death penalty (Labour having abolished it in 1941) a growing number of National Party members and MPs had found themselves conscientiously opposed to its retention. Interestingly, the liberal National Party Justice Minister, Ralph Hanan’s, majority for repeal included the new back-bench MP for Tamaki, Robert Muldoon.
The news media’s progressive role in the abolition of the death penalty might seem strange to a generation raised on the vicarious cruelty of reality television. Perhaps it was because journalists, as proxies for the crowds that once gathered to watch these grim events, were required to witness executions.
Only a pathological sadist could derive any pleasure from watching a defenceless man, often crying uncontrollably and begging for mercy, being frogmarched to the centre of a platform, where a canvas hood is thrust over his head, a noose tightened around his neck, and, at a signal from the Sheriff, dropped through a trap-door to his (hopefully) instant death. Seasoned reporters dreaded the execution assignment and their stories tended to be terse and generally sparing of the readers’ feelings.
There were exceptions. The relentlessly factual and highly detailed description of the February 1957 hanging of wife-murderer, Walter James Bolton, so horrified the public that it ended up being the last execution ever carried out in New Zealand.
With the end of capital punishment, however, the news media entered into a new relationship with the ill-fated “cast” of the standard homicide case.
The victims of deadly violence have always supplied reporters with sensational copy, but, in the days of the death penalty, the apprehension and conviction of the murderer naturally shifted the focus away from the dead to the one about to die. Often, the public found themselves caught up in the defence lawyers’ appeals for mercy on behalf of perpetrators who frequently turned out to be as much sinned against as sinning.
But when the worst that could happen to a murderer was being locked in a prison cell for a couple of decades (at most) journalists began to look elsewhere for the sort of pain and pathos that sells newspapers. The murder victims were, of course, beyond the reporter’s reach, but their family and friends were still very much alive. What’s more, the new, humane, Justice System often left the murder victim’s family and friends feeling cheated of the revenge they so desperately wished to see exacted upon the body of the person who had robbed them of their loved one.
Thus began the inexorable rise of “the victim’s family” as an unassailable source of commentary on the whys and wherefores, rights and wrongs, of contemporary crime and punishment. It was from distraught parents, heartbroken husbands and wives, and bereft children that journalists sought definitive judgements on the conduct of the accused’s trial and the appropriateness of any sentence. From the intense pain and suffering of these stricken human-beings the news media was happy to mine bitter attacks on the rights of accused persons, the leniency of judges and the manifest inadequacies of the nation’s laws.
Not surprisingly, politicians of every hue have been quick to attach themselves to the public outrage whipped up by this sort of journalism. The consequent electoral auction has seen an alarming narrowing of the crucial distance which jurists, over many centuries, have laboriously imposed between the raw grief of the victim’s family and the need for justice to be dispensed dispassionately, without fear or favour. The whole purpose of the Crown making itself the aggrieved party – as opposed to the victim’s relatives – along with the state’s insistence on being the only agency legally entitled to exact retribution for proven offences, is at risk of being forgotten.
It all raises a very uncomfortable question. Which is worse: the death penalty, or what happens to society’s understanding of justice when capital punishment is abolished?
This essay was posted on The Daily Blog of Wednesday, 3 December 2014.
Posted by Chris Trotter at 10:13

The whole purpose of the Crown making itself the aggrieved party – as opposed to the victim’s relatives – along with the state’s insistence on being the only agency legally entitled to exact retribution for proven offences, is at risk of being forgotten.

While I share your ambivalence about the media's role in public discussion, you can't avoid the primacy of the right to have a criminal wrong redressed by invoking the Crown's intermediary role in the administration of justice.

While the sentencing process requires judges to consider many factors, criminal justice is comprised of the imposition of an appropriately severe punishment. The centrality of the need to ensure the sufficiency of punishment vis-a-vis victims shouldn't be obscured by the fact that justice also requires us to treat offenders fairly.

The John Howard attitude to crime and punishment shows we were already losing our stomach for execution. It's a driving reason why we turned to transportation to the colonies but did anybody stop to think how we are supposed to do this if we are one of the we who migrated? "I'm sending you to Tasmania" kinda loses its thunder when you're already there. So the 'we' in Blighty gets to keep their hands clean and the 'we' over here is passed the buck of how to reconcile execution with humanism.

The Caryl Chessman story(still taught at UC to we youngsters <70 as long as Greg Newbold is lecturing with his slide projector, as now) is the old New England penal colony dealing with that. To read about Joseph Burns' hanging, Nz's first, in 1847, and the flotilla and parade that went with it shows that 'we' didn't all find this reconciliation immediately confronting.

So, *unless* we bring back the medieval Ship of Fools or the modern pharmaceutical equivalent then it falls to us to...solve...this...Oh, wait. We should be all good then.

Very powerful argument, Rick. I'm pleased that you decided it was necessary to talk about it.