What's In A Name? Let The Anzacs Rest In Peace, Mr Key. 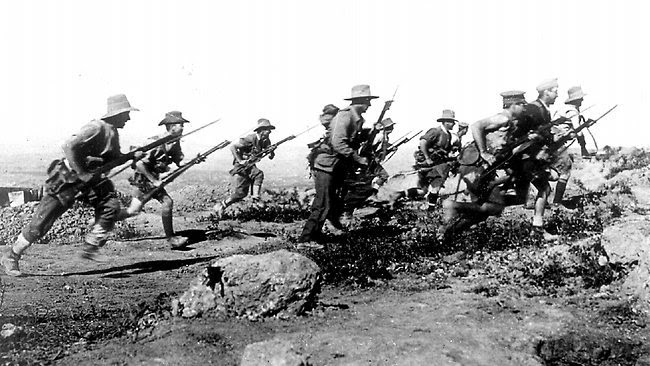 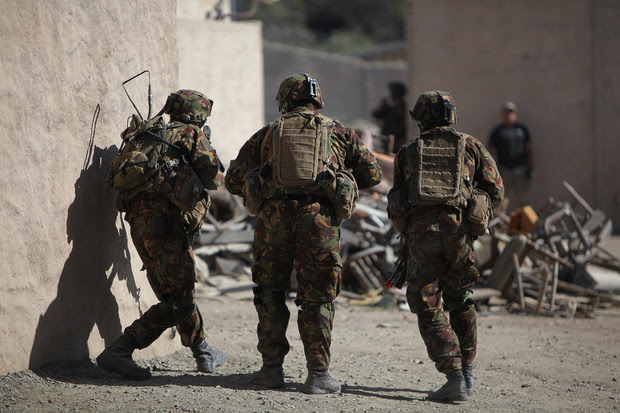 Dry Run? US Marines and New Zealand soldiers conduct joint military exercises, "Dawn Blitz", at Camp Pendleton, California, in 2013.
Iraq is a failed state riven with corruption and religious enmity. Its standing army is a standing joke. Nine tenths of the men we’d be “training” have no wish to either kill or die for a regime they neither respect nor trust. The remaining tenth will gladly put themselves and their weapons at the disposal of Islamic State. Nowhere in Iraq is “behind the wire”. The whole country is a combat zone.
If the “strategic studies” departments of our universities were worthy of the name they would be condemning the madness of sending foreign troops to Iraq in order to crush a movement brought into being by the presence of foreign troops in Iraq. With Australian planes strafing IS positions and its special forces readying themselves for combat, nothing could endanger New Zealand’s “home front” more than publicly joining our name with that of the United States’ gung-ho “Deputy Sheriff”.
Imperial folly has claimed enough New Zealand lives. No more.
This essay was originally published in The Waikato Times, The Taranaki Daily News, The Timaru Herald, The Otago Daily Times and The Greymouth Star of Friday, 5 December 2014.
Posted by Chris Trotter at 10:26

As a species, we don't seem to ever learn anything much. At least not from history. Does noone remember Vietnam? Another failed, corrupt state propped up by the West – this time in an attempt to stop communism. The French couldn't do it, so the Americans stepped in. It began with 'advisers'. They naturally went out in the field with the troops they were training, and found themselves fighting or commanding those troops in some cases. Not to mention that some South Vietnamese refused to go out without Americans. And I can't see it being much different here, unless strict controls are imposed on what our troops can and cannot do. Mind you, the Americans have spent literally billions on training the Iraqi army, and it still can't face a raggedy - arsed group of fanatics, who have managed to take much of their weaponry from them in the first place. Say what you like about Keith Holyoake, he managed to resist American pressure to the extent that our engagement in Vietnam was minimal.

Keep up the good work Brotha!!!
That's an order!!!

One of your best-ever columns, Chris. John Key is getting more and more out of touch with public opinion.

I believe Drunk On Power is the phrase you were looking for Fern...

If we were to train the Iraqi army I always thought it would be better to have them fly a contingent to NZ and train them here to a high standard for 6 months, fly them back, rinse and repeat and keep rotating them through...

We could have other Countries lining up to build our roads

Too bad we got a bunch of talentless chicken-hawk tin generals who wouldn't know how to win a war if their lives depended on it...

I wonder how any New Zealand soldiers likely to go to Iraq feel about the prospect. Anyone with half a brain would be pretty nervous. Basically there's now frontline to retreat from. They will be dropped into the middle of hell. I don't know if John Key actually comprehends this.

As Trotter has said previously...

Them lads are like the All Blacks....They're the crew who wanna play.

It's on all of us to protect themselves from themselves!!!

And when they are sent in to harms way then it's on us to ensure that the mission is right, their tactics and strategy to succeed, and they have the leadership and equipment to achieve victory!!!

"I don't know if John Key actually comprehends this" David

John Key does not comprehend this!!!

Neither does the Minister of Defence or the top brass...

Here is my pick for Minister of Defence...

Clearly current US and UK approach to the problems in Afghanistan, Iraq and Syria are not the answer. However can we afford to do nothing. Can we fail to contribute our opposition,unarmed and armed to ISIS, Al Qaeda and the Taliban. It is likely that Aus, UK and USA will eventually evolve a more coherent and possibly even more ruthless policy. We were born with them and should remain with them. Failing to contribute and remaining an isolated collection of Islands will be the most disastrous policy in the medium and long term. The Hager argument that NZ is a non violent country and the best way of avoiding trouble is to stay out is the cowards way.

I can't see how failing to contribute to the war against Isis would be disastrous. It's an American problem, and solely an American problem. They caused the organisation to come into existence, and it's their policies in the Middle East that keep it in existence in the form that it is anyway. I suggest that being associated with these policies would be disastrous in the short medium and long-term. For obvious reasons. New Zealand has tried, and so far as the right-wing mind is capable, to have an evenhanded policy in the Middle East. I think that is appreciated – except perhaps by Israel. Personally, I'd like to see a more pro-Palestinian stance, but that ain't going to happen – so evenhandedness is going to have to be good enough.