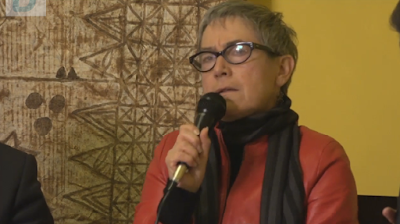 If that really is Wayne Mapp that regularly comments in these pages, I'm not surprised Jane Kelsey wiped the floor with him. She has a formidable intellect, he has somewhat less than that judging by his posts.

Having just read your article, then having a beer and a few vodkas I have come to the conclusion that nothing has changed in the last 40 years of my life, the losers like Jane Kelsey have the best arguments but the winners, who may be the losers on the night, are on the right side of reality and wisdom for the future.

Anyone who is not a millionaire will lose if Key signs the TPPA ...the secrecy isn't an accident .
No democracy can survive an Executive that has no interest in the thoughts of "the people" .

now that is a debate I would have liked to have seen....dont suppose anyone recorded it?

Thanks for this summary of the evening. I was sorry that I couldn't make it.

I can reveal to you, and to any other doubters, that the Wayne Mapp who comments on Bowalley Road is, indeed, the REAL Wayne Mapp.

No ifs, no buts, no maybes: The REAL Wayne Mapp.

Thanks Chris for clearing that up. I was pretty sure he was the real Wayne, because he ducks and weaves like a politician when you ask him a really hard question. Incidentally Brendan, I'm still waiting for your theological qualifications for criticising Islam. Loud silence there too I might say.
Couple of other points. Two semi-drunk anonymous. How do you characterise Jane Kelsey as a loser? Respected academic, in fact I regard her as New Zealand's Elizabeth Warren, and as far as I can figure she was stone cold sober on the night :-).
And "reality". I get a little bit sick of the right wing mantra of "reality" this sort of TINA thing. It only seems useful to you when you are using one particular form of argument. Otherwise "reality" is apparently what we make it, i.e. when you're talking to poor people who can't get a leg up.
IMO, reality is that capitalism should be preparing for massive job losses due to robots taking almost all but service jobs, and eventually those too. See – I can talk about reality as well. And I think my definition is in the long term probably more accurate than yours.

put her on the same stage as people like Wayne and Michael, or pit her against Mike Hosking, live, on Seven Sharp, and her critics’ arguments are swept away like so much summer gossamer.
........
a main goal of politics is controlling the message so that key structures in an argument aren't exploded in mass media (that's why W goes around town halls - the media never gave him a fair go).

Where was Jane Kelsey when Sonia Davies expressed the doubts about "this process of population replacement" (quoting Bedford in context)?

I wish we knew more of our MP's real thinking before it goes into the PR agency. Then we would know National's open slather property traders and Labour's open border politicians. Everyone is allowed to have an opinion wrong or right. What is wrong is misrepresentation (only appearing in Sunday best).

Jane has been wiping floor with likes of Mapps,McCulleys,Keys,Guys,Grosers here since way before another phenomenal woman's death in the UK.
Anita Roddick RIP was I consider in same league as Jane and Elizabeth when it comes to advocating for Fair Ethical trade vs Politically Enabled Corrupt Corporate Speculation.

Hope to see your face at march on Saturday Chris.
Jax

Well, Jane might say she supports free trade. But the reality is that she has never supported any agreement in her entire adult life that actually promotes free trade. She opposes them all. So on that basis, in terms of the real world, she opposes free trade.

However, I can imagine there must be an alternative Green world view which supports free trade, but allows each nation can put up selective trade barriers that would support whatever industry each country wanted to support. And that did not have any patent laws or copyright right laws so that we could all freely access all IP on the basis we should freely share all knowledge. Such is socialist nirvana.

But back to TPP, Jane certainly confidently predicted that there would be no ministerial discussions prior to Christmas based on her "inside"knowledge, which seems largely to be based on discussions with various lower ranked officials on the periphery of the talks. But is she accurate?

From what I hear there will be high level discussions early September.

My view (perhaps not unsurprisingly) of the night was a little different. There is no doubt Jane is much more engaged and researched on this issue than I am. It seems to be the largest part of her professional life, and she goes to the majority of the negotiating sessions. For me it is more of a general commitment to free trade, and TPP is now the single largest negotiation in that regard.

However, the opposition of the audience to TPP was not nearly as relentless as I expected. There seemed to be a significant group in the room who are are actually genuinely weighing the issues up, and who are not instinctively anti-TPP.

And mick, I assume you must think everyone in the agricultural sector are millionaires, from the farm owners, to the share-milkers, to the process workers, the rural contractors, and all the people in the provincial towns. Because that is the range of people who will be the largest group of New Zealanders to benefit from TPP.

1.The world survived for hundreds if not thousands of years without patent or copyright laws.
2. That bastion of free-trade the USA became rich by ignoring patent laws in the 19th century.
Sauce for the goose? :-)
Incidentally Wayne, still waiting to hear what might change your mind on the matter of the TPP.

PS – Wayne, if farmers are going to be the major beneficiaries of the TPP, one might hope that they would start paying their workers a bit better, and maybe stop importing workers from the Philippines or various other low-wage economies.

Gosh Mr. Wayne Mapp do take those rose-coloured Rightwing glasses off and really see the world as it is not some fancy Ayn Rand dystopia.

The TPPA has nothing to do with "FREE TRADE" and everything to do with corporate control. NZ is NOT going to get access to the Yank markets or any of the others either. The Yanx have promised that they would look at access sometime 20 years from now maybe. In return for that we will pay a lot more for our drugs and if we legislate anything that interferes with corporate profits we can be sued in a private "Court" made up with the very people who are running the show. All done in secret too. Nothing democratic about it. Not surprising though as Rightwing Ideologues don't believe in Democracy anyway.

Hi Chris
@ Mr Mapp
If anyone was seriously seeking free trade there would be no need for agreements. Everyone would just trade freely. So called "free trade "agreements are the exact opposite of what the phrase implies. We should be selling what we can produce competitively to customers who can be relied on , and buying what we can afford from the result.
Cheers David J S

I notice this morning that Tim Groser is telling everybody that the protesters are a mixture of the deluded and misled, and hard-core protesters. Leaving aside where he gets is evidence from, you'd think that maybe they'd come up with something new? This bullshit goes back years. I remember being told by a national party minister years ago that I was being led by the nose by my union leaders, and I just come from a meeting where the exact opposite was true. The union leaders were urging caution and the rank and file were shouting them down. Let's face it, Groser is the deluded one here.