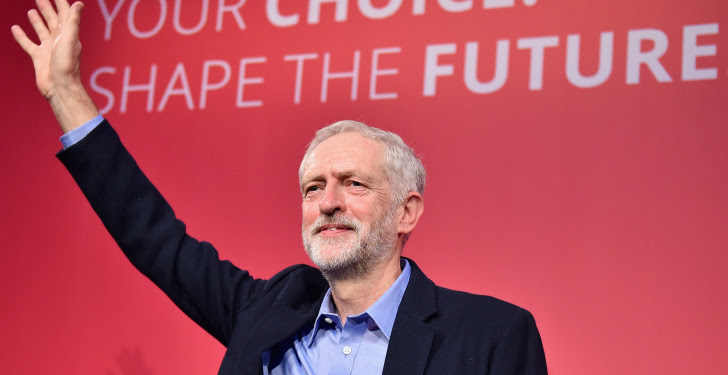 "As if a radical politician, with the hopes of more than a quarter-of-a-million supporters riding on his performance, is going to adopt a strategy that will immediately brand him as “Just another bloody politician!”"

Isn't that exactly what's-his-name in Greece did?

Having refused the Party Whip 500 times in his political career Jeremy Corbyn must have the ability for original thought. I presume that is a reliable statistic Chris. It certainly is an amazing one. Having a secure seat must give a pollie some leverage over the Party machine. What a superman - he has leaped over the labourtories in a single bound. He looks as if there is plenty of spring in his step, and air under his cape to take him further.

I think he'll need that original thought to deal with those who refuse HIS party whips :-).

I'm in London currently and reading the left press he'll be done in by them let alone the Tories.
A term I have not heard before is 'magical thinking' and Chris you're exhibiting it.
My only original thought on him is that his immigration policy alone will bring out more votes against him than his angry mob can muster. It does indeed work both ways, as he and you will find out I predict.

Charles - Chris exhibits a lot of 'magical thinking' - he predicts what he would like to happen(at least what he thinks he would like to happen) and being firmly rooted in the past the site and sound of Jeremy Corbyn is like the appearance of a magical figure come to rally all the troops towards a march on the socialist paradise. No doubt when it all turns to crap he will find a good reason to explain it away as is already the case. Seems to me the very beginning of Corbyn's reign is already showing the cracks that will open ever wider. Lots to say about women but so far none in the shadow cabinet......and so it goes. Even as Chris concedes that the man is a very average speaker he will have to be past exceptional to convince even a minority of voters let alone his own backbenchers. Going to be very interesting-socialists don't deal well with failure-just watch GS!

As greywarbler said jigsaw you people make a lot of assumptions. Socialists don't deal well with failure eh? The usual patronizing, complete bullshit generalisation. On the other hand I can make an equally patronising generalisation, that neoliberals just ignore their failures on sail on happily – viz "George Bush kept us safe" :-). Of course most of them don't experience the failures. That's reserved for the poor and working class.

Jigsaw I agree but GS did put his finger on the core problem Corblimy has and it's not my lot. It's the other side of Labour who are furious here in the UK. Possible split coming or a new vote in short order.
Politics is serious stuff here with hard issues like immigration and terrorism meaning more that just sound bites from daft spoilers like Winnie.

The other side of Labour Charles? You mean the Blairites? They were never Labour in the first place just Tories in disguise. If you can't see the difference then man, you've got a problem!

There is something about Corbyn that scares the hell out of the Tories who-ever they are. Tony Blair has been making a real mess in his fancy silk undies! The man was never Labour and would have been a wonderful puppy dog for Mad Maggie Thatcher.

Yes, there may be a split but it will be getting rid of the rotten bunch that are traitors to the principles of what Labour stands for. ORDINARY WORKING PEOPLE! Not the rich pricks who can and do look after themselves with the help of the Taxpayers.