Lacking The Power Of Decision: Andrew Little Misses The Rhetorical Mark In Whanganui. 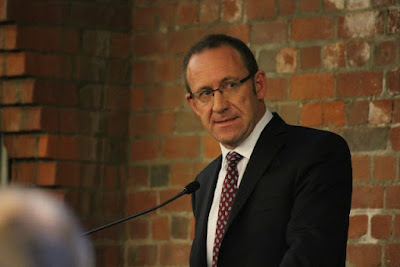 Same Old Stuff: Andrew Little's speech to Whanganui Greypower was chock-full of worthy sentiments, but expressed in prose so leaden you could almost feel the weight of them choking his vocal chords.
LAST THURSDAY*, in Whanganui, Andrew Little addressed the local branch of Greypower. I was alerted to this altogether unremarkable fact by the Leader of the Opposition’s Political Director, Neale Jones. He thought I might be interested in the content of Little’s speech. “It ties together the various strands of overseas speculators, foreign ownership, farm sales, TPPA, refugees and climate change into the idea of a New Zealand that engages with the world without fear and on its own terms.”
As you might imagine, I began the speech with high expectations, but, by the time I had ploughed through the first couple of pages, my mood had subsided to one of mild interest. It’s not that it was a bad speech. Indeed, it stands comparison with most of the speeches crafted by ministerial staffers working in the Beehive. Sadly, that is not a very high bar to clear.
Only one passage from Little’s speech stuck in my memory. It was the paragraph describing David Lange’s speech to the Oxford Union in 1985:
“In the face of the scorn and derision from the most powerful nation in the world, Lange stood up against the madness of mutually assured destruction. He showed that a small country could forge its own path, even in the face of much more powerful interests who wanted to hold it back. He showed us that New Zealand could be an example to other nations, that we aren’t bound by the inescapable flow of history. That we don’t just have to accept the world that is. That we have the power to shape our own destiny. That we could, in his words, ‘restore to humanity the power of decision.’”
Like so many of David Lange’s (Margaret Pope’s?) best lines, “the power of decision” positively vibrates with political meaning. Little’s speechwriters recognised this, but were unable to unpack the significance of the phrase in a way that caused their boss’s text to come alive. Instead they opted to, rather mechanically, link the idea of decision-making to Labour’s stances on overseas speculators, foreign ownership, farm sales, the TPPA, refugees and climate change.
“The New Zealand I’m proud of doesn’t shirk from our responsibilities. We’re better than this. We’re meant to be the country that stands up for what’s right. Labour stands for a New Zealand that reclaims its place as a global leader, and as a country with a conscience. A country where we chart an independent path again, because it’s the right thing to do.”
Worthy, worthy sentiments, to be sure, but expressed in prose so leaden that you can almost feel the choking weight of them on Little’s vocal chords.
This was, remember, a speech to Greypower – an audience in whose lifetime the speeches of leaders as striking as Churchill, Kennedy and Martin Luther King were to set ever higher benchmarks for effective political communication. An audience which could also hear, in their mind’s ear, Norman Kirk’s gentle eloquence, the rasping menace of Rob Muldoon, and David Lange’s soaring flights of imaginative inspiration.
Words, well-chosen and creatively arranged, possess enormous power. What’s more, they’re all a politician’s got. The musician has his instrument; the artist her paints and brushes; but the person who seeks to move his or her fellow citizens, in whatever political direction, must rely, almost entirely, on the power of the spoken word.
Though many would snort with derision at the very suggestion, John Key is a master wordsmith. His tortured English syntax, mispronounced words, and fragmented – often meaningless – sentences are perfectly matched to his political purpose. As a conservative New Zealand prime minister, he neither seeks to inform, nor inspire, his followers. Ideas only lead to division – and conflict. Key’s mission is to reassure his listeners that he is as uncomfortable with big, fancy notions as they are. He communicates in that curiously disjointed and indirect style peculiar to the “Good Kiwi Joker” – and they love him for it.
Which is not to say that, when the need arises, he isn’t capable of letting fly with rhetorical zingers like “screaming, left-wing, conspiracy theorist”, or, “Kim Dotcom’s little henchmen”. No matter how mangled, John Key’s words are always well-chosen and fit for purpose.
In Opposition, however, the overwhelming priority is not to obfuscate, but to make the clearest possible case for a change of government. That’s why it is simply not enough to talk about the power of decision: the job of the Opposition leader is to demonstrate it. If Little, in his speech to Whanganui Greypower, had limited himself to setting forth his own and his colleagues reasoning behind just one recent Caucus decision (on overseas Chinese property speculators, for example) his speech would have been much more impressive. When people are permitted to hear the arguments; when they, too, are invited to confront and make the important moral choices; then not only is “the power of decision” made manifest in the ranks of the Opposition, but people discover, to their own delight, and in a way that binds them emotionally to the speaker and his party, that they can do it too.
The power of decision is a magnificent theme to explore in a political speech. Such a shame, then, that, in his address to Whanganui Greypower, Andrew Little, and his speechwriters, proved themselves unequal to the task.
* 10 September 2015.
This essay was originally posted on The Daily Blog of Friday, 11 September 2015.
Posted by Chris Trotter at 11:50

A dull grey rightwing bore...just like Bill Shorten.....zzzzz. Where is your Jeremy Corbyn?

Well I never, a critical response to the labour leaders speech, its a start .What we need from the whole multitude of left wing bloggers is fair dinkum critical analysis of the labour party, no punches pulled, for us peasants to comment on. My response to the speech is what do you really expect from writers and a leader who are all neophytes ?

Andrew Nichols, they do not have one, they have Andrew and Jacinda instead.

Good question Andrew. Is Little Andy up to the task?

The worst of it all is I'm sure the fire is in there somewhere - is he listening to the wrong people?

Hey Chris, you are at least consistent In your consistent sniping and undermining of the NZ Labour Party leadership...interesting that there is so little negative comments about your articles so I am assuming that this won't be posted

I've said for a while now that the labour party needs a bloodbath - and not of the leader and mps, but of the strategists, advisors, speechwriters and others of that ilk. Until that is done, and the "team" that has lead two leaders (and looks like it is leading a third) to destruction, has been cleaned out and replaced with competent people, Labour are going to go nowhere.

Agreed Bloggsey. The NZ Labour Party needs a damned heavy dose of political Epsom Salts. Clean out all the crap.

I am waiting to see if Andy is the man to do that.

I think that most people interested and hopeful about Labour getting some fire and conviction into its politics relating to all the people, can't be pleased by getting fed generalised anodyne ideas and principles. Where is the noisy heckler shouting 'What abart the workers then"? If there is a lack of such a response, it is a telling silence.

The country needs more than soothing words and a kind hand on its fevered brow. Where is the call to action, the appeal to the everyday person that will get their heads up from their handheld controllers? These are future problems he should say, listing them, and they will impact especially on the low income and struggling middle income New Zealanders - he should point out. And those people will look with interest and a little scepticism to Andrew showing how Labour plans to work with them for a better future which avoids all of the future scenarios of doom. He will have their attention. That would be a start.

First show that Labour knows what it's talking about. Many people won't even have thought of the future problems, as they can't even cope with the present ones. Then a plan of action to improve now, and then each year expand action concerning climate change widely to try to manage the future, or ameliorate it. (Thinking climate or collapse of financial support, or the whole system etc.)