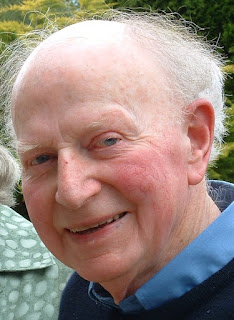 
TONY TROTTER – “Mr Country Calendar” – died today (Wednesday, 9 March 2016) aged 91, from natural causes.
As the television broadcaster who chose its distinctive theme music, and moved the programme out of the studio and “into the field”, Tony shaped Country Calendar into the nation’s most beloved television series. The iconic programme, celebrating every aspect of rural life, is still being produced, and this year celebrated its own fiftieth anniversary.

Tony’s later work included the ground-breaking Natural World of the Maori, with Tipene O’Reagan, and the quirky A Dog’s Show – which turned the obscure country sport of sheep-dog trialling into a popular television show. Tony ended his broadcasting career in 1989 as the Executive Producer of Television New Zealand’s award-winning Natural History Unit in Dunedin.
The son of a country doctor, Tony was raised in Herbert, North Otago, during the Great Depression. He was educated at Otepopo School and Waitaki Boys High School. In 1943, aged 18, Tony joined the Royal New Zealand Air Force. He trained in Canada, and ended the Second World War as a Pilot Officer. Returning to New Zealand, he spent the next 20 years of his life as a farmer. His property, “Beaulieu”, was situated 5 miles east of Herbert. In 1951 he married school-teacher Margaret (Peggy) Marshall, also of Herbert. They had four children: Peter, Ruth, Christopher and Jane.
In 1965, Tony sold his farm (which was too small to remain profitable) and began an entirely new career as a broadcaster for the NZBC. After a short stint as a radio announcer in Timaru, Tony’s farming experience took him south to Invercargill and rural broadcasting. Two years as Southland’s rural broadcaster was rewarded with a promotion to Wellington, where he was soon involved in a fledgling television programme covering rural affairs called Country Calendar.
A well-respected and highly creative television producer, Tony also possessed a mischievous sense of humour. His Country Calendar “spoofs” – like the celebrated “playing the fence” sequence, in which “tuned” fencing wire was plucked to produce a deep, harp-like music – delighted the programme’s eager audience.
In retirement, Tony was an active member of Dunedin’s Pakeke Lions Club. He was also a tireless campaigner for Jim Anderton’s Alliance, and the principal backer of the left-leaning magazine, New Zealand Political Review.
He is survived by three of his children: Peter, Christopher and Jane. Three grandchildren: Margaret, Michael and Aelinor. A great-grandson: Lachlan. Daughters-in-Law: Cathie and Francesca. And Son-in-Law, Shane.
This posting is exclusive to Bowalley Road.
Posted by Chris Trotter at 13:20

My condolences Chris. Lost my dad about 18 months ago and my mother about two years before that. Even if it's inevitable and you're expecting it, it still hurts.

I'm sorry to hear of your dad's death, Chris.

My condolences Chris.
He made a great contribution to his country.
I loved the Country Calendar spoof items, and the humourless response they often produced when people realized they'd been fooled.

I usually post anonymously, so I'll keep this one the same. Perhaps I can stand in for all us anonymous (coward?) posters.

I had no idea that you came from such noble stock! Country Calendar is NZ TV at its best. Quality. Like father, like son.

My condolences to you and your family, Chris.

My sympathy Chris. A Father is such a special person.

My condolences Chris. These sacrifices, political projects and creative endeavours certainly made NZ a better place to live in. Tony Trotter's values are alive and well in your exemplary work. May God bless your father. Regards, Manfred.

Condolences on your loss, Chris

I worked with Tony both on Country Calendat and and Natural History NZ in Dunedin. We was a fine producer and a real gentleman. Please accept my deepest sympathies.

What a wonderful father Chris. To be only in mid-twenties and already have a lifetime's experience in war, and then to bring so much into showing NZ the intricacies of farming life, and the amazing working wonder dogs. And to live such a long and fruitful life - he is very inspiring. You will miss his presence and his wit.

My condolences and sympathies for the loss of your father ...

What a good father _

What a good father

What a very good father !


The life story of a true son of New Zealand; student, war serviceman, farmer, creative broadcaster, and above all a husband and father.

Thanks for sharing that with us Chris

A fine innings indeed and I'm sure he was very proud of you Chris.
Cheers

Very sorry to hear this, Chris.

My Condolences too Chris!

RIP, thanks for sharing this great life Chris, reminds on a human level why NZ is indeed “worth it”

My sympathies Chris.
I am the same age as you and my father is 4 years older. I know similar unwelcome news is not far off for me.

A wonderful twinkly-eyed man who was a delight to be around. A great producer with a mischievous mind that never stopped at the first wicked idea. Tony will likely be herding clouds in Heaven right now and probably breeding them too. His wise words are greatly missed. Sincere condolences Chris.

Hi Chris I met you at your parents place in the early 1990a when I was the minister at Grants Braes. Sorry to hear about Dad. You and your clan are in our prayers. Rev Hamish Kirk

My condolences Chris. I knew him at Avalon in the early 1980s.
His legacy lives on every Saturday evening at 7pm.

Thoughts and prayers are with you and your family at this time, Chris. Your writing reveals how proud you were of your father: a rare gift for any man, a rare accomplishment.

Condolences to you all

Dear Chris,
Deepest sympathy in the loss of your wonderful father. He was a great NZer in every sense of that expression, as are you.

This Te Ara clip of the documentary Natural World of the Maori with Sir Tipene O'Regan is for the use of students and family, and I think would be allowed to be displayed here for us to learn about the work of two great men, Sir Tipene and your father. It is very informative showing the history of the resourceful Maori who learned their self-sufficient ways from experience.
http://www.teara.govt.nz/en/video/40259/karaka-groves

Condolences Chris. I hadn't known Tony had died. He and I must have arrived at the NZBC's Broadcasting House within months of each other in 1967. We shared studios, offices and tea trolleys. Everything you said about Tony being the son of a country doctor, a student at Waitaki Boys High, a pilot officer and then a farmer, fits with the gentle man I looked up to and remember. Along with characters like Jim Henderson, and chief news sub and non stop smoker Ron Jones, Tony reinforced my hope that in radio and television I could find a life time career.

Not usually one to post comments, but the recent death of Frank Torley prompted this. Tony and I spent a lot of time together in Wellington and all around the country in the early days of "Country Calendar" (I'd been assigned as producer) and had many long and interesting discussions on a wide variety of topics, some related to work, some not. I'd still like to think of him as a friend, as well as a calm, decent, alert, inquisitive and often funny man - as decent a bloke as you could hope to meet. His memory brings a smile.

To George Andrews and Derek Morton:

My sincere thanks, George and Derek, for your kind words. He was a good man, a splendid father and I will miss him terribly.

Strange, sometimes, how things work out. With Dad and Frank Torley dying within three weeks of each other, in the year the programme celebrated its 50th anniversary, the whole early era of "Country Calendar" has been brought to an abrupt and definitive conclusion.

CC will endure, but it will not be the same.