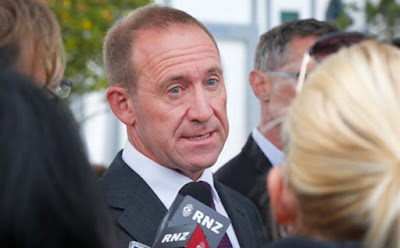 Pondering The Counterfactual: How many more percentage points might Labour have advanced in the latest One News Colmar Brunton poll had “discontented party activists” not spent the week prior to its execution demonstrating rank disunity and ideological extremism?
ONE SWALLOW does not make a summer, any more than a two-percentage-point lift in the latest One News Colmar-Brunton poll amounts to a massive political vindication. What Labour’s marginal rise in popularity does signal, however, is some very unhelpful news for some very unhelpful people.
Why do I say that? Because the furore over Willie Jackson’s return to the Labour Party can now be put in its more immediate context.
Before exploring that context, however, a word or two about polling.
Both of the major political parties have their own “internal” pollsters (David Farrar and Curia Research in the case of National, Stephen Mills and UMR for Labour) and both know when their researchers are in the field. Indeed, they often time their public policy pronouncements to coincide with such polling.
For very similar reasons most senior political operatives and public relations mavens also like to know when media-commissioned agencies like Colmar Brunton are on the job and when their results will be published.
In a society as small as New Zealand, acquiring such intelligence is relatively straightforward. Most of the people who believe they need to know, know someone who really does know when a poll is about to get underway.
The fieldwork for the Colmar Brunton poll that was broadcast on One News on Sunday, 19 February, was conducted between 11 and 15 February 2017.
This is significant, because in the week prior to the survey the Labour leader, Andrew Little, found himself under vicious attack from persons (including Poto Williams, the Labour MP for Christchurch North) opposed to Labour’s strategic recruitment of the broadcaster, community organiser, and former Alliance MP, Willie Jackson.
That Williams consulted a Christchurch public relations firm, Inform PR, to shape her criticism of Little, and to assist her in distributing the resulting statement to selected political journalists, prior to posting it on her Facebook page, struck many observers as odd. Now that we know Colmar Brunton was scheduled to be in the field by the end of the week, William’s behaviour appears much less so.
The same applies to the letter of protest posted on Facebook by members of Labour’s youth wing – Young Labour. Like William’s media statement, this document attracted considerable media attention throughout the week, especially after two former Labour MPs, Maryan Street and Marian Hobbs, added their signatures to the document.
Throughout the week Little was required to endure the less-than-friendly attentions of the parliamentary press gallery, as well as a succession of highly critical opinion pieces questioning his political judgement and challenging his commitment to Labour’s quest for gender parity.
By the end of the week, the proprietor of the POLITIK blog, Richard Harman, was reporting that:
“The events last week [5-11 February] seem to be connected to what has been what one senior party source described as a ‘parallel universe’ of discontented party activists who have been active on the left-wing blog ‘The Standard’ and who also organised to promote candidates for office within the party.”
It is, therefore, very tempting to see, with the benefit of hindsight, the timing of the criticism of Little’s recruitment of Jackson as something more than coincidental. If Harman’s “discontented party activists” had prior knowledge of when the Colmar Brunton survey would be in the field, it is not difficult to fathom why they might be tempted to seize upon the opportunity to put a spanner in the Leader’s works.
Clearly, there are many in Labour’s ranks who do not like the idea of the party once again becoming a “broad church”. How better to prove the unwisdom of Little’s policy than to orchestrate a week-long outpouring of protest against the Jackson recruitment, culminating in a falling-off in support for Labour – and Little – as measured in the oh-so-conveniently scheduled Colmar Brunton survey?
Except, of course, the campaign failed to achieve its objective. Far from registering a falling-off of support for Labour, the poll revealed a small, but very welcome, rise in support. At last, Labour was back in the 30s – an important morale-boost for both the caucus and the wider party. The recruitment of Jackson and the selection of the former Police Association President, Greg O’Connor, had produced precisely the effect which Little and his team had be working for.
The question that cannot be avoided, however, is as straightforward as it is disconcerting: How many more percentage points might Labour have advanced in the Colmar Brunton poll had “discontented party activists” not spent the week prior to its execution demonstrating rank disunity and ideological extremism?
This essay was originally posted on The Daily Blog of Monday, 20 February 2017.
Posted by Chris Trotter at 10:56

It is great to see Labour starting to reach out to a broad range of people and stop fighting the Greens over the left. The addition of Greg O'Connor was a brilliant stroke by Andrew Little (although I wonder if Ohariu is the best seat for him - civil rights-focused voters, especially Greens, might find his support for general arming of police a bit hard to swallow).

I do wonder whether Andrew is (to use a very bad comparison) Labour's Don Brash - the guy who gets the party in position to win, rather than the guy who wins. Let's see how we go...

One miserly correction - Poto is MP for Christchurch East, not North.

An interesting piece, Chris. But I begin to sense another National victory, albeit with NZ First thrown into the mix.

It seems to me that English has started the year well and is able to cater to a perceived need for stability, in a world that's rapidly being turned upside down.

But, of course, it's early days and I may be proved wrong

Victor I sense the opposite. There seems to me a wind of change. I listened to some noise about the state of the rivers and heard real anger. I have heard anger re housing, indebted graduates, student debt, immigration. Too late for National to pick this "populist" positions up as they are seen as the problem.

I agree there's a lot of anger around (and not before time) but I don't yet see much sign of it translating into support for Labour and/or the Greens. NZ First is another matter.

The question, to my mind, is whether English can ride the two horses of continuity and change at one and the same time. It's a hard act to pull off but I've been a mite surprised by his success to date.

And, I must confess, I have some difficulty taking Andrew Little seriously, which might condition my view of things.

Time, though, will tell. The events of 2016 should temper all forecasts.