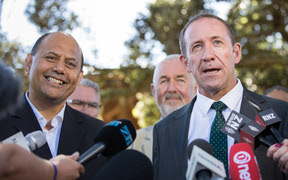 And now Mana has no mana with its blatant politicking by Hone Harawira try to use the Maori Party to help him get back in. Back in where?

Asking Willie Jackson and Sandra Lee to comment on the Maori Party-Mana Party alliance was a stroke of genius.

One thing I loved about your piece Chris was the desperate attempt to paint labour and Māori relations in a good light. Bugger the fact that labour rolled to the racist bullie boys who dominate the business, and national party politics in this country. Screw the land grab. Who cares if labour excluded the poor Māori and poor Whites from any working for families tax credits. And what happened to restoring core benefits? Lets conveniently forget that one of the things about austerity is it get worse and worse for the poorest in society with each passing year. Colonialism never happened.

Oh wait I'm just a moaning identairanian or some other crap label which will appear from the wood work. But please please don't gloss over the fact that labour still are in bed with liberal economics, and as such nothing, not a damn thing will change to improve the lot of poor Māori or poor Whites. Austerity as policy is lunacy, and Māori have and continue to pay the price for that policy. Funny that, that has not dawned on the Māori Party yet, but it may. They are weak on economics, they really don't understand it. It is there to attack them, on a fundamental lack of understanding on the long term and short term economic cost of their decisions. Rather than trying to paint a turd, a rose.

But I think Adam has made an obvious and relevant point, viz: that it's the poor of all ethnicities that have been penalised by every government of the last three decades, with Maori disproportionately represented amongst them and with little or no advantage to the general state of our economy.

I accept that the Clark/Cullen government was better intentioned than either its immediate predecessors or its successor and that it came under severe pressure to buckle. But buckle it did. Can we expect better of Little et al? Somehow or other, I doubt it.


Meanwhile, thanks for recommending the LBJ movie. I look forward to finding it in the further recesses of cyber-space. With respect to Johnson and Humphrey, this might further whet your nostalgia buds:

You can see the middle class professional manager types in iwi like Ngai Tahu.

Many of them are talentless half-wits milking their good fortune for all it's worth.

If they weren't 'working' for Ngai Tahu, they'd be doing some mindless middle management job in the bureaucracy.

I heard Andrew Little call the housing issue "a supply issue": he's one of *them*.
That's why I would never trust Labour (the architects of *the New New Zealand * and the official reality).

While the National Party’s accelerated Treaty settlement process helpfully expanded the Maori middle-class, the Maori Party maintained a deafening silence as *neoliberal economic and social policies wreaked havoc upon its own people*. It was a Devil’s bargain: in return for abandoning the constituency which had given the Maori Party birth, the National Party was growing it a new one.
.........
I think the Maori Party got carried to power on National's back with a few concessions thrown in. Also some Maori are share holders in government guaranteed corporations (Ngai tahu Property - if you can't beat them join them) This represents cash in hand?
You can't understand what's going on without factoring academia either. This has produced the professional (PC) Maori (not to be confused with Maori professional).

Sue Bradford "from the left" is still talking about tino rangitiratanga: Maori precolonial culture as a model of beautiful coperation.

New Zealand is larger than England Scotland and Wales. We have a miniscule population of 4,769,429 which grows by 1 person every 3mins and 37 seconds
http://www.stats.govt.nz/tools_and_services/population_clock.aspx

These people are Kiwis returning to their native land now that NZ is booming. Smart Aussies are getting work here. Our population is just growing at 1.2%/ year and this is easily manageable.
Every person in NZ is an immigrant or the descendant of an immigrant. Immigrants bring contacts overseas and new ideas and in general a strong work ethic. They are impressed by the remarkable work of Bill English and the turn around in the NZ economy from basket case to bread basket. The golden years of prosperity lie ahead unless we fritter it all away with Green nutters yanking Labour chains.
Thumb up 7 Thumb down 0 LOG IN TO REPLY REPORTFEBRUARY 28, 2017 2:10PM
http://www.kiwiblog.co.nz/2017/02/aussies_still_flocking_here-2.html#comments

How fitting Mike Pero beams away beneath Farras post