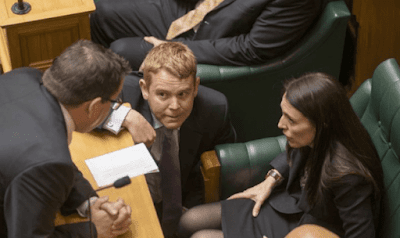 First Rule Of Parliamentary Politics - Learn To Count! Leader of the House, Chris Hipkins (Centre) confers with Finance Minister, Grant Robertson, and Prime Minister Ardern. Hipkins' mistake - trusting the word of the National Party - is one he will be determined to avoid repeating.

IT WAS A MISTAKE: a serious mistake; a mistake born out of Labour’s naïve readiness to trust the National Opposition. It was, after all, the first sitting of the newly elected House of Representatives. Normally, an occasion for a little bit of pomp and circumstance, when Members of Parliament swear allegiance to the Sovereign, assume their seats, and elect one of their number Speaker of the House. Historically, a day of bi-partisan goodwill; a day for tradition; a day of calm before the House settles into its normal, adversarial, storms.

Clearly, when the Leader of the Opposition, Bill English, told a member of the Parliamentary Press Gallery that “it’s not our job to make this place run for an incoming Government”, Labour’s new Leader of the House, Chris Hipkins, refused to take him seriously. Not even English’s parting shot: “we have no obligation to smooth [Labour’s] path. None whatsoever”, was explicit enough for Labour to take precautions against an Opposition ambush.

Not on the first day.

Not even when Simon Bridges, National’s “Shadow” Leader of the House, accused Labour of attempting to perpetrate an “unprecedented” erosion of the Opposition’s democratic rights, did Hipkins smell a rat. Why should he, when all he was proposing to do was implement a number of unanimously agreed changes to the rules governing the conduct and membership of Parliament’s select committees?

After all, these same amendments to Parliament’s “Standing Orders” – one of which limited the number of Select Committee members to 96 – had been recommended to the previous House of Representatives by no less a person than the man now proclaiming them to be a democratic outrage – Simon Bridges!

Obviously, this was all about the Opposition giving voice to their frustration. Opposition is never easy and the temptation to rhetorical over-statement is always very strong. English was simply talking tough – that is his job now. And Bridges? Well! Taking his cue from Bill, he was simply pumping-up the rhetoric to bursting point. Hell! Hipkins had done it himself often enough when seated on the Opposition Benches! All this fire and brimstone was being laid on for the benefit of National’s aggrieved voters, still smarting over the election outcome. There was no need for him, or anyone else on the Government’s side of the House, to get excited.

With the Foreign Affairs Minister, Winston Peters, and the Trade Minister, David Parker, both out of the country, and three more Government members absent from the Chamber, Hipkins was three votes shy of a majority on the Floor of the House. No matter, the only important business of the day was the election of Trevor Mallard as Speaker of the House, with National’s Anne Tolley as his deputy. All parties had been consulted, and all parties were agreed. The vote was a mere formality.

Until Bridges turned it into something else.

They say that the first and most important skill a politician is obliged to master is how to count. Bridges tallied-up the Government numbers and realised that the National Party had command of the Floor. Without a moment’s hesitation he pounced. If Labour wanted Mallard to be Speaker, then they would have to yield to the Opposition on the number of Select Committee members. Instead of 96, Bridges demanded 108. If Hipkins refused, then National would use its temporary command of the House to deny Mallard his heart’s desire – the Speaker’s Chair!

It was a scene of extraordinary drama. Bridges, his face contorted in a rictus of anthropoid belligerence, confronted the beseeching countenances of Hipkins and Finance Minister, Grant Robertson. The image will do him no harm – not among his caucus colleagues, anyway. With a single, ruthless stroke of parliamentary gamesmanship, Bridges has seized for himself the priceless mantle of National’s warrior knight.

But at what cost?

Hipkins made the mistake of believing that National would not stoop to turning the opening of Parliament into an ugly display of aggressive partisanship. It’s a mistake he will do everything in his power to avoid repeating.

In the memorable words of Bette Davis in All About Eve: “Fasten your seatbelts, it’s going to be a bumpy night.”

This essay was originally published in The Waikato Times, The Taranaki Daily News, The Timaru Herald, The Otago Daily Times and The Greymouth Star of Friday, 10 November 2017.
Posted by Chris Trotter at 09:06

Chris Hipkins will learn and the Coalition govt will learn to, but Bridge is a no return.

How quickly those on the Left forget their own history.
http://www.nzherald.co.nz/nz/news/article.cfm?c_id=1&objectid=10862612
Labour "claimed" that they hadn’t been consulted to their satisfaction on the election of a new speaker in 2013 so put up their own man.

Ray
I think they call yours false equivalence. If Labour and National had already agreed then it should have gone through as a gentlemen's (and women's) agreement. But it seems that Bridges has the mind of a card sharp or a sub-prime dealer, or the like. And too bad about the country paying them generous salaries to do their job of watching over the people's best interests. Never miss an opportunity to stick it to them, the National goal. What a pity National's pollies aren't all Australians because they behave like them. We would deseat them like a bucking horse.

Simon wants to be the next Muldoon...he lacks the good side of old Rob, such as that was.

Five missing MPs leaves it 58-57 in the Government's favour. They really didn't need to do this.

Ah ha ! Here you are!
'Old NZ'er'. That's precisely how I feel and do/am.
Pre neo L . What a strange contemplation...? I'm happy that I stumbled upon to your blog. I’m a bit pissed since I’ve been de-possuming my roof which leaves me feeling wily yet guilty thus the alcohol to assuage the angst.
“ Oh dear ! What have I done ! Murdered a fellow sentient being, the furry bastard ! Burn in possum Hell! But gently does it God would ya? “
Life is a wondrous series of contradictions don’t you reckon?

Oh... Chris Hitchcock. I mean ' Hipkins. Why do I get the feeling that whenever I think of Napkins... sorry, I mean Hipkiss? No, wait? Hipkins it's like I'm suddenly aware that I'm driving a car that I just know, someone's just sneezed all over the steering wheel? I sort of know I need to grip ? Yet yuk.
Oh, oh ? Can I say the fuck word now and then? For effect? You know how it is?

Loved this free-flowing stream of consciousness stuff. Very relevant to go on the blog in this age of Alice. And he? tried to keep on the subject, Chris H, in a most amusing way.

Your whole thesis is based on a false premise. The 96 was agreed for the then Labour etc opposition who were likely to remain so, but became redundant when the crooked king maker made his call and we ended with the largest opposition party ever. So Labour then wanted to deny 11 MPs a job they were elected by us to do.
Perfectly justified, and very predictably, yet missed by that bot Hitkins, Bridges made his move for democracy and Mallard got his prize, which National was always ok with.
Excellent politics and very much in favour of us, the people of NZ.