Darkness At The End Of The Rainbow? 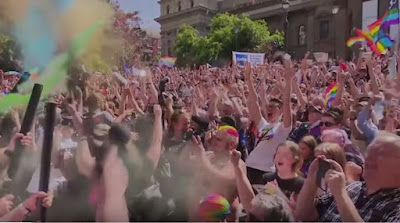 YES! Australians cheer the result of the postal plebiscite on Marriage Equality. This emphatic victory for social liberalism (61.6/38.4 percent) will hit conservative Australians hard. Liberal and National Party strategists may, however, attempt to exploit the fact that of the 17 federal electorates that voted "No", 11 are held by the Labor Party. Progressive Australians have won an important battle - but the culture war will go on.

WEDNESDAY, 15 NOVEMBER 2017 will go down in Australian history as Marriage Equality Day. In an unprecedented national plebiscite, 61.6 percent of the 79.5 percent of voting-age Australians who returned their postal ballots voted YES to marriage equality. With this resounding vote in favour, Australia joined the rest of the world’s progressive nations in rejecting homophobia and discrimination.

But, Wednesday, 15 November 2017 will be remembered for something more than Australia’s endorsement of marriage equality. It will also be recorded by social historians and psephologists as the day conservative Australians were required to accept a forceful and irrefutable message confirming their minority status in Australian society.

Hostility towards homosexuality is one of the most reliable markers of the authoritarian personality. It will, therefore, come as a profound shock to people of this personality type that their attitudes are not shared by an overwhelming majority of the population. That nearly two-thirds of their fellow citizens see nothing untoward about same sex couples getting married will deliver a shattering blow to their perception of “normality”. They will be dismayed by how far the world has strayed from their “traditional values”.

For some, the events of 15 November 2017 will prompt a thorough-going reassessment of their moral and political expectations of themselves and their fellow Australians. If they are lucky, this reassessment will liberate them from the debilitating effects of conservative ideology, fundamentalist religious beliefs and authoritarian attitudes. For many others, perhaps a majority, however, the discovery that their hatreds and prejudices towards the LGBTI community is shared by just 38.4 percent of their fellow Australians will evoke a very different – and potentially dangerous – response.

For these conservatives, the plebiscite outcome will be interpreted as irrefutable proof of how sick and sinful their society has become. Religious conservatives, in particular, will have no difficulty accepting their minority status. After all, doesn’t Jesus, in Matthew’s Gospel, enjoin them to enter in by the strait gate? “[F]or wide is the gate, and broad is the way, that leadeth to destruction, and many there be which go in thereat”? And doesn’t he also say that “strait is the gate, and narrow is the way, which leadeth unto life, and few there be that find it.”

No, the Christian fundamentalists will not be in the least bit surprised to discover that 61.6 percent of their neighbours are going to Hell.

Political conservatives and authoritarian personalities will have a much harder time of it, however. For their brand of politics, 15 November 2017 can only have been a profoundly delegitimating experience. Electorally, it could very easily signal their imminent marginalisation. “Mainstream” politicians will now have to adjust to the fact that social liberalism, which they understood to be confined to the effete inhabitants of the inner-cities, is actually embraced by a much more extensive cross-section of the Australian population. For many, on both sides of the parliamentary aisle, it will rapidly become advisable to evince a more progressive and tolerant political persona.

For the diehards, however, it is not yet the time to lay down their arms and surrender to the bacchanalian throngs gyrating joyously in the streets of Sydney and Melbourne. They still have eleven cards left to play.

The more sharp-eyed and ruthless members of the Liberal and National party rooms will have noticed that of the 17 federal electorates which voted “No” to marriage equality, fully 11 of them are held by the Australian Labor Party. In the strategically vital “Western Suburbs” of Sydney, the seats of Greenway, Chifley, McMahon, Fowler, Warriwa, Blaxland, Watson, Barton and Parramatta – all of them held by Labor MPs – voted “No”. Some, like Greenway, only very narrowly. (53.6 percent) Others, like Blaxland, by a huge margin. (73.9 percent!) In socially-liberal (some would say, radical) Melbourne, the only electorates which rejected marriage equality were the Labor-held seats of Calwell and Bruce.

There is simply no way the Labor Party can defeat the Liberal-National Coalition if even a handful of these eleven safe seats slip from the Opposition’s grasp. And while, in normal times, any suggestion that a seat like Chifley might be lost to the Liberals would be greeted with full-strength Aussie derision, it remains an awkward fact that we are not living in normal times.

Prior to 8 November 2016, the very idea that the states of Michigan, Wisconsin and Pennsylvania might be about to fall to Trump would have been met with loud American guffaws. But not after 8 November. Lashed and goaded in just the right way, the normally left-voting inhabitants of places like Michigan – or Chifley – can end up doing the strangest things.

For progressive Australians, 15 November 2017 will forever be bathed in all the vibrant colours of the rainbow. But, for the conservative ideologues, the religious fanatics and the authoritarian personalities trapped in their suffocating character armour, 15 November 2017 will be registered as nothing more than a temporary setback. The bigots might concede that, on this memorable day, they have lost a battle. But, for them, the war against a society grounded in gentleness, tolerance and love will go on.

This essay has been posted simultaneously on Bowalley Road and The Daily Blog of Thursday, 16 November 2017.
Posted by Chris Trotter at 09:00

Working class conservatism can be grim and myopic.

The Australian Labor party is a much bigger and diverse organisation than the withered urban rump and professional political elite that comprises it's NZ counterpart. Come a federal election the ALP is unlikely to be so stupid as to allow the campaign to be fought on the culture war front. It will instead offer a solid program of economic support for working class Aussie battlers and fight on that front.

What annoys me most about conservative Christians is that they completely ignore science. Particularly in the US, where apparently the world is about six thousand years old, evolution doesn't exist, and gay people going straight to hayull, as well people who use birth control or abortion services. Luckily attitudes like this diminish in younger cohorts, so basically all we have to do is wait until they die off. I can't wait, because it will save me a lot of time responding to their crap on various websites. (Just kidding, I'll be well dead before then.)

I'm sorry. I'm just.... I just can't see what the fuss is about? If I could take enough good ecstasy I'd marry a fence post and I'm as heterosexual as a flock of rugby players... Oooooh .... Wait a minute? You seen Aussie Rules footy? You been to a Gay bar on open night? Suddenly everything makes sense.

Chris, I find your argument here rather disturbing because you appear guilty of what you accuse the opponents of gay marriage of...intolerance. Heres what you say:

...for the conservative ideologues, the religious fanatics and the authoritarian personalities trapped in their suffocating character armour, ...... The bigots might concede that...... the war against a society grounded in gentleness, tolerance and love will go on.

In effect you have labeled these people, archetyped their characters, described them as bigoted and posited that they dont like gentleness, tolerance and love.

I dont have a particular view on gay marriage, mine is live and let live. Yet if you were to ask me what marriage is I would tell you it is a traditional societal construct for the support of children between a male and female. Does that make me a brutal intolerant hater? Am I not allowed a contrary view? Those people you describe might just have some valid reasons for their views, will you damn their right to express that? I reckon it is better out in the open, then you can deal to it kindly and gently, with love.