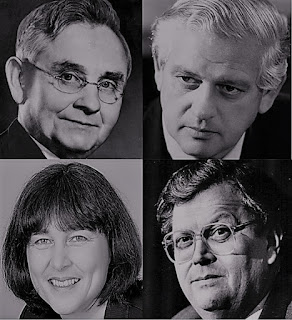 Pub Talk: Mickey, Norm and David were sitting at their usual corner table under a framed black-and-white photograph of Karl Marx. Karl, himself, was playing pool with Helen Kelly – and losing.

‘THE WORKERS’ REST’ stood in a remote corner of the Heavenly City. It was a squat public house, set slightly apart from the tile and weatherboard dwellings that confirmed the neighbourhood’s proletarian status.

From its open windows, patrons could watch as sturdy working-men emptied catcherfuls of grass-clippings onto compost heaps; housewives, in bright sun-dresses, pegged the contents of wicker washing-baskets to rotary clothes-lines; and tousled neighbourhood children played happily in the summer sunshine.

Mickey, Norm and David were sitting at their usual corner table under a framed black-and-white photograph of Karl Marx. Karl, himself, was playing pool with Helen Kelly – and losing.

“I’ll never get used to women in public bars,” sighed Mickey, “it simply wasn’t permitted in my day.”

Norm sipped his DB Brown, nodding appreciatively as Helen sank another ball in the corner pocket. “Wasn’t all that common in mine, either. Although things improved markedly after the abolition of six o’clock closing.”

“Well, it was a brave barman who dared stare down the likes of Sue Kedgely and Sandra Coney!”, boomed David. “That the first place the women’s libbers wrenched from the male chauvinists’ grasp was the local pub always struck me as impressively practical!”

“Well, in my opinion,” said Mickey, with a nod in Helen’s direction, “it’s a definite improvement.”

“And this new Prime Minister of ours,” queried Norm, “is she an improvement – do you think?”

“Miss Ardern? Well, she’s certainly an improvement over that lugubrious Tory from Southland. But, she is very young to be prime minister. Gosh, I was 63 when the Governor General summoned me to Government House.”

“Thirty-seven’s not that old,” objected David, “Alexander the Great is said to have conquered most of the known world by the age of twenty-five! Not that Jacinda would be impressed by that sort of carry-on. I look forward to hearing her scold him for not putting his case for world domination before the UN Security Council!”

“Very droll, I’m sure, David,” said Norm, “but I’m interested in hearing how you think she’s doing. I realise we can’t call hers a Labour government, not with that strange fellow Winston Peters in tow, but surely we wouldn’t be stretching things too far to call it a ‘progressive’ government?”

Mickey frowned, and set his glass on the table.

“If you’re asking me for a serious answer, Norm, I’d say ‘Yes – but not very progressive.’ One of the first things we did after winning the 1935 election was to get together with the trade unions and draft legislation designed to restore workers’ power in the workplace. If your intention is to force the capitalists to behave like decent human-beings – and that was my government’s intention – then you must have a strong and sophisticated workers’ movement at your back.”

Norm chuckled. “Well, when they arrested Bill Andersen in 1974, it certainly didn’t take long for the unions to mobilise in his defence. Ten thousand workers marched up Queen Street to the courthouse to demand his release. I had to send Hugh Watt to Auckland to defuse the situation. The problem though, Mickey, was that in 1974 I wasn’t sure whether the workers’ movement had my back – or wanted to stab me in it!”

“By the time I received my summons to Government House,” said David, “the unions had already had 12 months of voluntary unionism. Their membership was plummeting and they were willing to swallow just about anything from us – providing we restored their precious compulsory unionism. My Labour Minister, Stan Rodger, tried to strengthen the movement, make it more sophisticated, but, when push came to shove, it just wasn’t there.”

Mickey and Norm stared at David for a long time.

“There was a reason for that”, murmured Mickey.

“Did your government have their back, David?”, Norm added, quietly.

“If the workers aren’t persuaded you’re for them,” Mickey continued, “then it’s easy for the Tories to turn them against you.”

“Cheer up, guys!” Helen Kelly stood behind them, a glass of wine in each hand. “Labour’s industry agreements are a bloody good way to begin rebuilding the workers’ movement.”

The three men looked up at her doubtfully.

“No, seriously, they are. So, if Jacinda could just get her act together on medicinal cannabis, she would put her government’s progressive credentials beyond all doubt!”

This short story was originally published in The Waikato Times, The Taranaki Daily News, The Timaru Herald, The Otago Daily Times and The Greymouth Star of Friday, 29 December 2017.
Posted by Chris Trotter at 09:01

The last paragraph says it all. Reform the workplace and unify the workers. A pipedream? Is paradise truly lost? 2018 just round the corner.

Yes, do it for Helen and the others who haven't strength to argue for what should be available from a decent, caring society.
“No, seriously, they are. So, if Jacinda could just get her act together on medicinal cannabis, she would put her government’s progressive credentials beyond all doubt!”

And also what Sumsuch said that Jacinda could have done, and Grant Robertson - She coulda raised the benefits and eradicated child poverty 'in one blow'.
It's not too late to make some fast and serious inroads. Those who cavil against it would be disdained as heartless shits who know the cost of everything but not the value.

Have either Jacinda and Grant any children that they have produced themselves, ie not through blended families? And Grant, does he see himself as a family man with a household to run? Or is he the opposite to Big Dad the Catholic family maker with every child heaven-sent? Neither of them I think, have a real idea of what everyday life is for those at the struggling level of the aspirational ladder.

Immigration and tax breaks for investment in residential property are being cited as the underlying causes of steep increases in the cost of housing over the past decade.

New Zealand now boasts one of the highest rates of home unaffordability in the world as a result of prices rising far faster than incomes, and the government’s Savings Working Group blames that squarely on the policies of successive governments.
//
The report added that there was little evidence that immigration boosted local incomes. In fact, the need to build roads and schools meant that net migration contributed to the national deficit.
http://www.stuff.co.nz/business/money/4622459/Government-policies-blamed-for-house-prices

Noelle McCarthy
Jim Bloger was prime minister from 1990 to1997.
“Do you see NZ First and Winston Peters as playing in that same political space as figures like Donald trump and Nigel Farage?”

Jim Bolger
Broadly the same space but Winston has done that many times before so he’s not following them but the same space. And ah there were always a percentage of society who will follow that because it explains their own inadequacies often, that they haven’t been sucessful, so blame someone else based on identifying some definable group by religion, by ethnicity by colour, by nationality, and you blame them and that is, to my mind an apalling on those who do it but on any society that would accept that as a reason to change policies.
http://www.radionz.co.nz/programmes/slice-of-heaven/story/201851603/slice-of-heaven-tensions

We know what motivate$ the right, but what about the left? Johnathon Haidt and Jordan Peterson have an answer [from 34:00]
https://www.youtube.com/watch?time_continue=2419&v=4IBegL_V6AA

Housewives hanging the washing out for all eternity in your story, Chris. No paradise for the women eh?

A bit snippy Bea! I am sure that hard-working clever girls who have had
good parenting and goal setting will have had their place in the scenario and be able to get salaries over the average and flash houses and cars if that is Paradise for you.

Being able to hang out washing in the sunlight with opportunities for work and meaningful activity and fun and holidays at the beach swimming in clear water, hooking up the caravan or putting up the tent would seem like Paradise to many now. And the ability to save up, work and be rewarded with a mortgage for a house that could be paid off with money left over, that was the dream and felt like Paradise when it was achieved. And a woman could go back to work and have money for herself, study and get more skills. There were options and she could life a full, modern female's life.

She'll be jake, things could be done in the weekend, and cold beer after. Providing that the beer hadn't got to be the main purpose in life and taken to excess, as it was the major drug destroying many a family then, not cannabis. Not Paradise then.

Once again, Jens, I urge you to start your own blog.

You have one big idea, and I'd be much happier if you promoted it somewhere other than Bowalley Road.

And, one final tip. It is always better to give people your answers than to constantly plague them with your questions.

Have a happy New Year!

you don't publish dissenting views which is typical of the intolerant left.

therefore it's nothing but an echo chamber, patting each other on the back.

Publication of comments is entirely at my discretion, Anonymous.

The "Bowalley Road Rules" provide readers with a simple guide as to what sort of commentary is likely to incur my wrath.

Here, just for you, is the most relevant section of those rules:

"Comments which are defamatory, vituperative, snide or hurtful will be removed, and the commentators responsible permanently banned.

"Anonymous comments will not be published. Real names are preferred. If this is not possible, however, commentators are asked to use a consistent pseudonym."

Occasionally, and only if it is well written and has something pithy to contribute, I will let an anonymous comment through.

Otherwise, it will be deleted.

Peter P, one word. Syndicalism. That will piss off both socialists and capital.