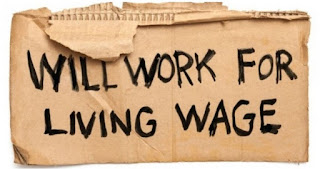 NEW ZEALAND has a major problem with the way its bosses do business. In simple terms, the problem boils down to this: Kiwi employers expect Kiwi workers to subsidise their profits.

It has been this way since 1991 when the Employment Contracts Act effectively eliminated the institutions principally responsible for ensuring a fair distribution of businesses’ surpluses between shareholders and employees – the trade unions.

The elimination of state-sanctioned and state-facilitated collective bargaining was intended to depress wages and boost profits. On both counts it was extremely successful.

In the years immediate following the passage of the Employment Contracts Act, profits rose spectacularly and union density fell precipitately. In the 1980s, more than half the private-sector workforce were unionised; today, fewer than one-in-ten private-sector workers belong to a trade union. Without unions, Kiwi workers’ share of the wealth they’d helped create began a steady decline which has yet to cease. In 2018, the purchasing power of their wage packets is not much higher than it was in the 1970s.

The comparison with Australia – where collective bargaining enjoys far greater protection – is as bleak as it is alluring. The wages paid to Australian workers are, on average, a full third higher than the wages paid to workers doing the same jobs in New Zealand. Small wonder that so many skilled New Zealanders have “crossed the ditch”.

Bad though this situation has been for New Zealand’s workers, their subsidisation of the nation’s businesses has had an even more malign impact on the New Zealand economy as a whole.

In theory, capitalist enterprises grow more profitable by becoming more efficient – more productive. Fewer – but better – workers is the goal. A firm’s investment in better machines and more highly-skilled (and highly-paid) staff may be expensive in the short term, but the long-term improvement in its performance will not only increase its profitability, but also cause it to become more resilient and competitive.

This was precisely the conclusion arrived at by government, employer and union representatives in Sweden in the late-1970s and early-1980s. Together, they embarked upon a project to “compress” wages – i.e. reduce the gap between the lowest and the highest paid workers – by means of what the Swedish unions called “solidaristic wage bargaining”. Highly-skilled and highly-paid paid workers in the most efficient industries moderated their wage demands, while the unions representing Sweden’s low-paid workers demanded more.

Did this force some firms to go out of business? Yes it did – that was the whole idea. Wage compression forced Swedish employers to either become more efficient – or go under. The improvement in Swedish productivity and the stimulatory effect of higher wages easily absorbed the workers laid-off by the businesses forced to close. Firms whose proprietors probably shouldn’t have been in business in the first place.

New Zealand’s solution was the exact opposite of Sweden’s. Rather than force inefficient businesses – and businessmen – out of the economy, the National Government of Jim Bolger, Ruth Richardson, Jenny Shipley and Bill Birch opted to keep inefficient businesses afloat by allowing them to consistently reduce their wages bill.

Slashing the basic level of social-welfare assistance by 25 percent was the indispensable companion-policy to National’s low-wage strategy. No matter how low wages fell, it was absolutely vital that benefits fell lower. Being in work had to be preferable to being on the dole.

Regrettably, the Labour-led government of Helen Clark and Michael Cullen failed to reverse National’s low-wage strategy. Not only did they decline to restore the trade unions to anything like their former strength, but they augmented National’s low-wage strategy by introducing “Working For Families” which was nothing more nor less than a massive wage-subsidy to New Zealand’s worst employers, and yet another structural impediment to New Zealand capitalism improving its overall efficiency and productivity.

The question to be answered now is whether or not the present Labour-NZF-Green Government is willing to take the steps necessary to purge the New Zealand economy of its least efficient employers and force the rest of them to lift their game? Neither John Key nor Bill English were willing to put an end to the rank injustice of a system that kept bad bosses afloat by constantly shrinking their workers’ slice of the pie.

Could Iain Lees-Galloway’s lifting of the minimum wage to $20.00 by 2020 be interpreted as a first step towards solidaristic wage-bargaining?

This essay was originally published in The Otago Daily Times and The Greymouth Star of Friday, 8 June 2018.
Posted by Chris Trotter at 13:56

Geez Chris – it's like waiting for a bus. Nothing happens for ages and they all come along at once.:)

True indeed they did all this. And they did it while promising us a high skill high wage economy. If that's not the epitome of hypocrisy, I don't know what is. It's like a lot of things – like education – we know what works, we have examples of it working overseas, and we either ignore them or follow countries where it hasn't worked simply for reasons of ideology. Whatever happened to pragmatism? Depressing.

It seems that everything that is said, promised and advanced as envisaged by government and leaders is revealed as lies and hypocrisy or stupid wrongheadedness from the determinedly ignorant, or academically brainwashed from higher education specialising in passing on the current received wisdom, and only that line of thought. That's a joined-up sentence from a simple person which, I consider, expresses the essence of volumes of words of explanation and study.

Incidentally,Incidentally, and just as a matter of interest though vaguely relevant, Varoufakis' second book about his attempted negotiations with the EU was on Amazon at about five dollars something yesterday. Kindle edition only. Might be worth a look if you have a Kindle or at least the app. I thought it was worth a punt at the price.

I have a real problem with the lack of collective bargaining; it has enabled well placed individuals to capture excessive amounts of remuneration.

In the private sector because of the dominance of huge corporations CEOs are rarely anything other than mandarins who extract value. They don't create value in the way the owner of a start up or small business has to. Therein lies an issue, wealth extraction is of itself of no value to the whole economy.

Worse still our public sector mandarins think they are highly valuable, and consist the head of an overpaid managerial and consultant class. Again no value creation. It is played by you and me through tax.

I want the equation flattened, distribute the money equitably and allow only those who create real value for the rest of us to benefit above this.

If Labour was a 'true' labour party representing the working class then Helen Clarke's government would have immediately repealed the employment contracts act. They didn't and this Labour led coalition won't either. I wish there was an alternative party to vote for on the left who represent the working class. (Not the Greens, they hate the working class)

Regrettably, the Labour-led government of Helen Clark and Michael Cullen failed to reverse National’s low-wage strategy. Not only did they decline to restore the trade unions to anything like their former strength, but they augmented National’s low-wage strategy by introducing “Working For Families” which was nothing more nor less than a massive wage-subsidy to New Zealand’s worst employers,

To my mind, the working for families thing was partly an attempt to return to the old structured, tiered wage rates which I think had a code of F for family, and went from F1 to F5 with a drop in the weekly PAYE as the family grew up to a finite five?

What would have been intelligent, if it is possible coming from the upwardly striving nouveau riche, would have been to have made parenting, caring and volunteering the equivalent of paid work. And if being done reasonably well, such people had some advantage from Working for Families or some stand-alone payment. But higher-class Labour wanted to break its ties with the proles, and they weren't sure about the plebs either.

I largely agree with you But I have a suspicion that "Working for Families" played a significant role in keeping our economy more buoyant than most during the worst of the GFC.

Is there someone out there with genuine knowledge who can confirm or deny this proposition?

Unfortunately Working for Families has become a back door subsidy for employers paying low wages. I think the government probably looked at the projected increased costs of it and realised that increasing wages at the bottom of the pay scale was the only way they could avoid a massive blow out in the cost of Working for Families. The Accommodation Supplement that a lot of low income New Zealanders now get is also another back door subsidy, but instead of employers it's for the landlords.

I think working for families was a sop to the middle classes, some of whom were finding it difficult to manage on their salaries. These are articulate people who tend to vote. I remember an article in the Dom. Post about it years ago. They interviewed a very middle-class woman who was asking why they couldn't manage on whatever they made. And it wasn't necessarily the bottom of the pay scale either. I think we received it for about a year, and we were by no means at the bottom of the pay scale that time. It was just that we had a family. Something about which I was told "Kids don't cost that much." – You know who you are.

https://www.vox.com/2014/4/18/5624310/martin-gilens-testing-theories-of-american-politics-explained
An interesting study. And I wouldn't be surprised if it applied to New Zealand.

Very sorry for my out of context 'modern media' fiery comments above this column. Easy enough to fire up, not so easy to build something. Though still don't understand your seeming arguments against this government between the election and its formation.