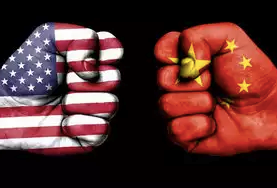 Disharmonious Fists: China: the country which, unlike the United States, has been willing to open her markets to New Zealand’s agricultural exports on a truly massive scale. The country which, more than any other, kept New Zealand afloat during the Global Financial Crisis. The country which, in return for keeping our economy healthy, asks of us only two things: equal access to our markets; and tangible evidence of our respect.

IRONICALLY, THE CONCERN over Chinese influence in New Zealand is being raised against a backdrop of unchallenged American hegemony. Extending across the whole width of the nation’s political stage, this American backdrop has become so much a part of the play’s scenery that most Kiwis no longer notice it. The inclusion of a few Chinese props, however, is enough to induce something close to panic among New Zealand’s political class.

That this country remains enmeshed in the intelligence gathering networks of the United States National Security Agency, for example, is considered problematic by only a very small minority of New Zealanders. Between the Battle of the Coral Sea in 1942 and the passage of New Zealand’s anti-nuclear legislation in 1985, most Kiwis simply assumed that the United States would always be their country’s principal military protector. America’s strategic planners seemed to agree, because they never for a moment considered suspending New Zealand from the so-called “Five Eyes” intelligence-gathering alliance. Dropping us out of the ANZUS Pact was considered punishment enough.

Moreover, as Nicky Hager’s book “Other People’s Wars” make clear, from the moment New Zealand was suspended from the ANZUS Pact, elements of what passes for this country’s “deep state” undertook to rebuild this country’s damaged relationship with the United States. Senior civil servants like Gerald Hensley simply refused to accept the Fourth Labour Government’s foreign and defence policies.

For those of you wondering what the Wellington Declaration (signed by Hillary Clinton and Murray McCully) entails – here’s the guts of it:

“The United States-New Zealand strategic partnership is to have two fundamental elements: a new focus on practical cooperation in the Pacific region; and enhanced political and subject-matter dialogue — including regular Foreign Ministers’ meetings and political-military discussions.”

The content of the Labour-NZF Coalition government’s Defence White Paper, far from being a departure from existing policy, is clearly a reaffirmation of the previous National-led government’s re-commitment to the United States.

These diplomatic and military links are merely the most formal manifestations of US hegemony in New Zealand. Beyond and beneath them extends an intricate network of personal, cultural and economic relationships that binds together inextricably the American and New Zealand political classes.

So many Kiwis have studied and worked in the United States. So many exchange students have come and gone. So many of our military and police officers have been seconded to serve alongside their American counterparts. So many of our best and brightest graduates have been shoulder-tapped for a stint in Washington or New York.

So numerous are these relationships that they could be said to constitute a veritable “fifth column” of American power in New Zealand society. Even if Kiwis elected a government committed to breaking free from the tutelage of the USA, the resistance from these US “assets” in our foreign affairs, military, business and media bureaucracies would be formidable.

Also to be considered is the all-pervasive influence of American “soft power” on New Zealand society. So much of the digital information we receive, the movies and television shows we watch, the music we listen to, the clothes we wear and the vocabulary we use in our everyday speech hails from the United States. Our directors and screenwriters head for Los Angeles and New York. Young Maori and Pasifika from South Auckland emulate the musical and dance styles of Black and Hispanic Americans. Even our news and current-affairs shows formats are borrowed from the US. How much of New Zealand culture is genuinely indigenous? Three-quarters? Half? A quarter? Less? Living in the shadow of a great power can be a profoundly disintegrative experience.

We have been here before, of course. Back in the days of “Mother England” when New Zealand made a fetish of being the most loyal of the British Empire’s “dominions across the sea”. British hegemony in the century between the signing of the Treaty of Waitangi and the Battle of the Coral Sea was no less all-encompassing than the hegemonic networks of the United States.

There was, however, one important difference between British and American rule. Up until 1973, the United Kingdom was happy to assign New Zealand the highly remunerative role of the Mother Country’s South Seas farm. The Americans, however, have never expressed the slightest interest in taking all the agricultural produce New Zealanders would be only too delighted to send them – quite the reverse, in fact. American farmers have worked tirelessly to keep the highly-efficient Kiwis primary exports out of their markets.

Which brings us to China: the one country which has been willing to open her markets to New Zealand’s agricultural exports on a truly massive scale. The country which, more than any other, kept New Zealand afloat during the Global Financial Crisis. The country which, in return for keeping our economy afloat, asks of us only two things: equal access to our markets; and tangible evidence of our respect.

To secure this reciprocation, China is doing no more than any other powerful state will do to achieve its national objectives. It is building relationships with its trading partner’s political and economic elites; and, it is projecting its soft power as far as possible into their society. In other words, behaving exactly as the British and Americans have behaved in relation to New Zealanders – albeit on a much, much smaller scale.

If New Zealand’s American “friends” are so anxious to have us remove the handful of Chinese props from our political stage, then perhaps it is time for us to replace their all-American backdrop with something Kiwi-made.

This essay was originally posted on The Daily Blog of Friday, 20 July 2018.
Posted by Chris Trotter at 15:52

"China: the country which, in return for keeping our economy healthy, asks of us only two things; equal access to our markets; and tangible evidence of our respect."

SOrry Chris, but why should New Zealanders show :"tangible evidence of [their] respect" for China, by which I suppose you mean the Chinese Government? New Zealanders should have to demonstrate their respect for a foreign government? Are you being deeply sarcastic, or has the MSS graced your palm or has some Madam Butterfly disgraced hers?

New Zealanders shouldn't have to demonstrate respect for their own government, why a foreign one?

Who's the lucky Mss Butterfly hmmm? Svelte and seductive Shanghai political science student who contacted you to praise you for your balanced views?

The projection of imperial power versus our ability to trade poses us a problem. We have to be able to get goods to market across maritime routes currently controlled by the USA. Should that change and the sea lanes be controlled by China then we have an equal issue. China, like the U.S. would have a competitive advantage of being able to dictate terms of trade.

Unfortunately history indicates that we are a small fish amongst many herded into a meat ball by big imperial fish. Stick our tail out and we get eaten. Unless we become able to offer a Swiss option we will be the playthings of Empire.

I once asked a school kid in Christchurch what he wanted to do when he left school.

He said he wanted to join the FBI; convinced it was a New Zealand institution.

I kid you not.

The last 70 years of the US Rules based order (Do as I say not as I do) has been a period of unrivalled weapons grade hypocrisy aided and abetted by our colonised politicians and media.

Chris, we are all a mass of contradictions, but given thought how do you square your open advocacy for free speech, speech deemed highly offensive by many, with calls for New Zealanders to demonstrate respect the Chinese government, and do you not recognize he contradiction there?

Two parts of democracy, the process and the substance. This proslytiser of authoritarianism over in China though not aggressive v. the raddled Roman republic of America full of it. Except when the idea of democracy is suffocated there is no more of it. Do you prefer the real legitimacy in China, the 'Mandate of Heaven'. I prefer a glistering vision, of us.

Hating the US Government doesn't mean you have to love the Chinese government.

There's plenty to respect but among those many things to respect .there's not a strong right to disrespect - to do so many go against your official social and productivity score.

Democracy is a vision and a rallying cry and a moving target to aim for and as it moves round, like a ball, it fascinates the eye of sport-mad NZs who think they understand it and talk glibly and confidently about it.
Meanwhile there is a new ruse developed on the political field, a try and conversion slips past them and the anonymous punters still have their mouths open. The rules of games and those of politics are different, that is one thing these citizens should learn. When it comes to China or USA we are between a rock and a hard place. Possibly we should do a Trump, upend the chess table, go for a Russian maneuver for a while which will surprise and disconcert everyone.

S0 we're irritating the sultans of China and Russe. And our own democracies have been turned into manufacturies of consent for the powerful. We can rely on the gold of evidence and the representation of the people. To become mystificated is to fall into the hands of the Right. Prince Metternich, I'm willing to appoint you our foreign minister re outer affairs, tho' I dinna like the present state of China and Russe, let alone you.