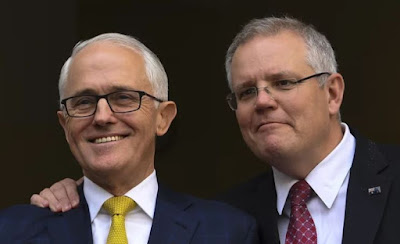 "Don't think of it as a hand on your shoulder, Malcolm. Think of it as a knife in your back." The ultimate beneficiary of the Liberal Party meltdown, Scott Morrison, is a deeply conservative evangelical Christian from one of Sydney’s leafiest suburbs. He replaces Turnbull largely because his name isn’t Peter Dutton – and because his face doesn’t remind the voting public quite so much of Harry Potter’s Lord Voldemort! In policy terms, however, there is very little that distinguishes Morrison from his ultra-conservative colleagues.

NEW ZEALANDERS WATCHED, with mounting incredulity, the meltdown of Australia’s Liberal-National coalition government. What unfolded appeared to be driven almost entirely by a toxic mixture of personal antipathies and oversized egos. Nowhere in the whole unedifying political saga did the interests of the Australian people appear to get a look in.

Mind you, the Australian people had made it easy for Malcolm Turnbull’s enemies. When questioned by the pollsters they had failed to draw a sufficiently clear distinction between the Prime Minister and his increasingly dysfunctional Party Room. Had they praised Malcolm Turnbull, and damned the Liberal Party, then the cause of governmental integrity and stability might have been strong enough to repel Tony Abbott, Peter Dutton and their reckless co-conspirators.

As it was, the polls and a swag of dispiriting by-election results in Queensland and elsewhere across Australia provided Abbott and Dutton with the pretext they needed for a leadership spill. Never mind that the declining popularity of the Liberals was almost entirely attributable to the party’s conservative faction’s blank refusal to accept that most Australians wanted nothing to do with their reactionary ideas.

Not even the decisive result of the informal plebiscite on Gay Marriage was enough to convince them that they were out-of-touch with mainstream Australia. They clung to the demonstrably false notion that “Real Australians” were with them.

Though fantastical, this conservative conviction was constantly reinforced by reactionaries in the news media. The views of a decided minority of the Australian electorate were thus supplied with amplification out of all proportion to their true demographic weight. As Dr Goebbels discovered more than eighty years ago: a fantasy repeated often enough will, eventually, take on the colour of reality.

Poor Malcolm Turnbull was, therefore, dammed if he did attempt to reassert the liberalism implicit in his party’s name; and damned if he didn’t. The deeply conservative ideology of the Liberal PM, John Howard, has become practically ineradicable from Liberal Party ranks. Turnbull may have been able to oust Abbot from The Lodge, but he could never muster the numbers to oust the conservative faction’s racism, misogyny, homophobia and purblind climate change denialism.

The ultimate winner of the Liberal Party leadership, Scott Morrison, is a deeply conservative evangelical Christian from one of Sydney’s leafiest suburbs. He replaces Turnbull largely because his name isn’t Peter Dutton – and because his face doesn’t remind the voting public quite so much of Harry Potter’s Lord Voldemort! In policy terms, however, there is very little that distinguishes Morrison from his ultra-conservative colleagues.

But, it is with these largely cosmetic considerations that the Australian political system’s willingness to be guided by the wishes of the electorate ends. The notion that the major political parties might still aggregate and organise the interests of clear and readily comprehensible chunks of the population: businessmen and professionals; shopkeepers and farmers; workers and intellectuals; has long since ceased to correspond to any recognisable description of political reality on either side of the Tasman.

To be fair, most of the voting public has enthusiastically reciprocated the politicians’ lack of interest. Over the course of the past 30-40 years membership of political parties in both New Zealand and Australia has plummeted. Most voters now draw little distinction between a Member of Parliament and any other variety of highly-paid public servant. The crucial democratic role which the people’s representatives are supposed to play is no longer generally appreciated. As the unedifying spectacle of Malcolm Turnbull’s deposition unfolded before their eyes over the third week in August, the response of most Aussies was to angrily instruct MPs to: “Do your f***ing job!”

But, if the people are no longer sovereign – then who is? It’s a tricky question. In the days of Robert Menzies or Rob Muldoon it was pretty clear to everyone who ran the show. Nowadays, however, respect for the party leader tends to last only as long as the polls remain favourable. But, when public support falters, the most treacherous and ambitious politicians look in the mirror and ask the oldest question is politics: “Why not me?”

The historical precedent, therefore, is not that of a powerful monarchy like England or France, but of Poland or Scotland. Weak kingdoms brought down by the unceasing intrigues and inveterate treachery of aristocrats who cared more for themselves than they did for their country.

This essay was originally published in The Otago Daily Times and The Greymouth Star of Friday, 31 August 2018.
Posted by Chris Trotter at 11:30

Normally I'd be rubbing my hands in glee to see a conservative party self immolate. Particularly one as right wing as the Australians'. Australia deserves better. But I also have some sympathy with people abandoning party membership. Why bother working your arse off to get someone elected, when they get most of their money from businesses and business people, and they essentially don't care about party members anymore. I've said this before but it bears repeating I have not been canvassed by any political party for years, except a couple of years ago once by phone. They believe with some justification, that they can better tell the way people are going to vote by looking at social media than going round to their houses and asking them.
And if MPs are treated as just another highly paid public servant, that's pretty much what they are. They have become part of a political class that has very little to do with the people they are supposed to serve. I wonder how many of them send their kids to the local high school. Many years ago I remember talking to Fraser Coleman at a parents' evening. I guarantee this doesn't happen outside of the private system and Auckland Grammar or whatever these days.
Mind you I also sort of feel a bit betrayed having stumped a bit for Mike Moore years ago to find that he was a secret wingnut libertarian or something. You begin to ask yourself "what's the point?" I think the point disappeared sometime round about 1984.

'He who lasts wins.'

This is a very interesting analysis.

In the light of falling party membership, and so capture, I think leaders should be more willing to split parties to seek support among the people. Cunliffe, and Turnbull over the water.