Better Health & Safety Laws Could Have Stopped The 1981 Tour! 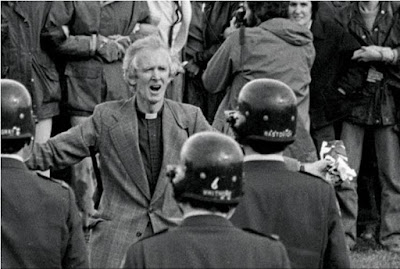 People Could Get Hurt Here! If we’d had the same health and safety rules back in 1981 as we have now, then the Springboks wouldn’t have got to play a single game!

IF ONLY the New Zealand of 1981 had possessed health and safety legislation to match the laws of 2018. It took Pat McQuarrie, at the controls of the light aircraft he had stolen from Taupo airport, and his threat to fly it into the grandstand of Hamilton’s Rugby Park, to persuade the Police Commissioner, Bob Walton, that it might be in the interests of the health and safety of the spectators gathered to watch the Springbok-Waikato Rugby match on 25 July 1981 to cancel the fixture.

Fast-forward 37 years and just think how easy it would be to achieve the same result today. No need for the likes of Pat McQuarrie in 2018. A few hundred raggle-taggle left-wing gypsies threatening to “confront” Rugby patrons if they attempted to enter the ground is all it would take to convince the New Zealand Rugby Union that the game would have to be called-off.

Crikey! If we’d had the same health and safety rules back then as we have now, then the Springboks wouldn’t have got to play a single game. The anti-tour movement was just so huge in 1981 that its entirely credible threat to organise major disruptions of air travel, the railways and the motorways would have been more than enough to induce Rob Muldoon to instruct the Rugby Union to withdraw their invitation to the South Africans.

Certainly, the state television network would have required little more than the threat of interference with its super-expensive transmission equipment to announce its determination to boycott the Springbok Tour altogether. Of course, without television coverage of the matches it would hardly have been worth the Rugby Union proceeding.

Such a shame that in 1981 the authorities cared so little for the health and safety of New Zealanders that they were prepared to deploy thousands of Police and employ the armed forces to lay thousands of metres of barbed-wire to ensure that the rights of Rugby players and spectators were not infringed. Not only that, but if any protester attempted to prevent the Rugby matches from proceeding then they could expect to be cracked over the head with a Policeman’s baton.

Yep. The consequences for exercising your right to free expression back in 1981 could be severe. When the Springbok-Waikato game was called-off, the protesters who had made it onto the field were lucky to escape with their lives. Bottles and beer-cans rained down upon their heads leaving many of them bloodied and bruised. Spectators pouring out of the park then attacked the first-aid station treating the injured.

New Zealanders back then were horrified at the level of violence unleashed on the protesters. But that’s only because people were much less aware in 1981 that if people “talked shit” then they deserved to “get bashed”. It was nowhere near as well understood in those days that speaking-out against the prevailing ideas of the day constituted nothing less than an open invitation to everybody who subscribed to those ideas to have at the dissidents with fist and boot.

The 1980s were such unenlightened times. The appalling events  of that era could never happen in the Aotearoa-New Zealand of 2018. Our health and safety laws simply wouldn’t permit it!

This essay was originally posted on The Daily Blog of Thursday, 9 August 2018.
Posted by Chris Trotter at 12:25

"Fist and boot". In May,1971 NZ soldiers had a parade down Auckland's Queen Street. Naturally - it being the era of the Vietnam War - the mungbean eating, patchouli reeking crowd turned up to demonstrate. Some of the more enthusiastic protesters even threw themselves in the way of the parade. The soldiers were not happy. Latter on a group of troopers headed up to well-known student pub called The Kiwi, and proceeded to bash the living shit out of the offspring of the well-to-do. Ah to be a fly-on-the-wall at the Kiwi. The sound of working class fists and boots smashing into soft bourgeois flesh. The Screams of " Pigs/ Fuzz save us from the just retribution of men we have pissed off ". But there were no pigs/fuzz to save them. I bet they didn't think that was "far out" or "groovy". For the record, my mum's little brother ( I call him Uncle Kerry ) was an infantryman who toured Vietnam in 1967 and 1971. I like to think he was at The Kiwi in spirit.

I was right in the thick of this 1981 tour Chris, including being in the centre of Hamilton's rugby park and getting a broken eye socket on exiting from a T Awamutu dairy farmer rugby supporter thug.

This said I;m not quite sure what your point is though it may be my comprehension levels are sliding.In discussions with human right's lawyers on this freedom of speech discussion one thing is clear.Section 61 of the NZ Human Rights Act says that an expression of hate speech resulting violence is in breach of the law.The immigration Minister was compelled to grant the visas to the two Canadian hate merchants Minister because no pre emptive related violence had taken place and one couldn't speculate whether it would.

This said whilst totally opposed to those opposing Brash with equal hate speech that could have a similar violent outcome there is not doubt if one listens carefully to the voice of minorities that they are the first to suffer and "Maori bashing" both verbally and physically is a manifestation of this.

I personally found Simon Wilson's so powerfully reconciled with my own but I was disturbed by the vehemence that some liberals showed despising the protestors all of whom were/are safe and secure pakeha.

I don't think for one moment this subject is a one off as indicated with the right wing creeps like Pauline Hanson and Nigel Farrage, who are lined up to come here with their hate vile.Knowing Don Brash and his history well, unfortunately I think he's oponed a can of worms that is going to polarise our society perhaps not to the same extent but similar to the 1981 Springbok tour. And just as the mantra of the rugby supports "that there's no place for politics in sport" effectively endorsing apartheid in South Africa, those who think that freedom of speech is a gin and tonic debate subject for FRiday evenings live in a dubious morally questionable cloud cuckoo land.

This is not the domain of safe psuedo liberal intellectuals. Itr's far more serious

Shane:
New Zealand troops behaved in the pubs of Auckland just as they had in the villages of Vietnam. What else would we expect?
While you applaud these events, I see them as reflecting a gross failure of leadership within the colonial regime. In many theatres of war New Zealand forces have regarded civilians as fair game, and have treated enemy wounded and prisoners brutally.
Is it then any wonder that in the last forty years they have lost every war fought against adversaries who treat civilians with respect, obey the laws of war and show compassion to enemy wounded?

I've yet to hear a reasonable discussion on the issue of the deliberate disruption of free speech. How do you reconcile the priorities of those wishing to speak with those in society wanting to stop them speaking?
For the left leaning among us; would you support the right of a mob to disrupt and make impossible a union meeting? If that's not OK then how can it be acceptable to support a mob preventing someone you don't agree with from speaking. These are not merely hypothetical situations.
If we are to uphold the principle of free speech and free assembly(and God help us if we don't) then we are bound as a society to defend it, by force if necessary and at no cost to the speaker. The mobs veto is completely unacceptable.