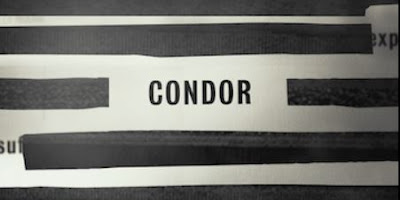 Dark Imaginings: That more and more novelists and screen-writers are reaching for the deadly virus plot-line reveals an alarming shift in the zeitgeist. Slowly but unmistakably, the mood of the world’s artists is darkening. Few now are willing to embrace the heroic hopefulness of a Tolkien. Indeed, the twenty-first century fixation with extinction-level pandemics points to an artistic community tormented by murderous despair.

NEW TO SOHO on Sky Television is the latest “Deep State” thriller, Condor. In brief, the plot revolves around a genocidal conspiracy involving a rapacious firm of military contractors* and rogue elements within the CIA. Their goal? To release a deadly virus with which they hope to wipe out vast swathes of the population of the Middle East. The second episode opens with the infamous quotation attributed to Joseph Stalin:

Death solves all problems: no man, no problem.

That more and more novelists and screen-writers are reaching for the deadly virus plot-line reveals an alarming shift in the zeitgeist. Slowly but unmistakably, the mood of the world’s artists is darkening. Few now are willing to embrace the heroic hopefulness of a Tolkien. Indeed, the twenty-first century fixation with extinction-level pandemics points to an artistic community tormented by murderous despair.

It is the privilege of artists to think the unthinkable and imagine the unimaginable. Which is exactly what so many of them are doing in response to the deepening crisis of anthropogenic global warming. Human nature being the raw material out of which they fashion their artworks, it is not difficult to understand their growing pessimism. With every passing year, and every disregarded warning from climate science experts, it becomes clearer and clearer to them that the human species is not going to make it. Unsurprisingly, their imaginative powers are being turned to the subject of how best to rescue the planet’s other life forms.

The German philosopher Friedrich Nietzsche long ago recognised the dangers of turning the human imagination towards extreme solutions. His forebodings are best expressed in two, oft-quoted aphorisms: “Have a care when fighting dragons, lest ye become a dragon yourself.” And: “Stare not too long into the abyss, lest the abyss stare back into you.”

The risk of so many artists concluding that the only solution to Climate Change is to rid the planet of its most dangerous species, is that the most talented among them possess the creative power to make it sound like a good idea. Life has a terrible habit of imitating art.

The other great hazard associated with releasing the terrifying idea of eliminationism into the intellectual bloodstream of the non-artistic community is that the idea of deliberately destroying billions of innocent human-beings will become normalised. In no time at all, the unthinkable will become thinkable. People in a position to make awful things happen will begin to ask themselves: “Why not?”

The writers behind Condor have yet to move beyond the genocidal notion of drying up the sea of the Middle-Eastern peoples in which the Jihadist fishes swim. A reprehensible enough idea in itself but falling well short of the historically unprecedented crime of eliminating 95 percent of the human species. Even so, the Condor series points to the awful probability of eliminationist thinking taking hold in the minds of Deep State actors already quite capable of ordering drone strikes on wedding feasts; deploying chemical weapons against designated enemies of the state; and hacking up the sovereign’s critics with a bone saw.

Would that the world’s artists were willing to latch on to the much more optimistic Fixing-Climate-Change scenario elaborated by Counterpunch contributor, Steve Hendricks. https://www.counterpunch.org/2018/12/07/what-if-we-just-buy-off-big-fossil-fuel-a-novel-plan-to-mitigate-the-climate-calamity/ His eminently practical plan of simply paying the fossil fuel industry to keep their product safely in the ground; and then giving them the job of transitioning humankind to a sustainable green future; is proof of what we human-beings are capable of conceptualising when we shun the darkness and choose instead to keep our eyes firmly fixed upon the light.

*These private sector bad guys all work for “White Sands” – an insider joke aimed at those already familiar with the notorious exploits of the all-too-real military contractor, Blackwater, during the Iraq War. Black Water – White Sands. Geddit?

This essay was originally posted on The Daily Blog of 11 December 2018.
Posted by Chris Trotter at 11:37

All about reducing the population of the Middle East.

The subject matter gets darker, the body count grows, the boundaries of descency plummet. That's the trajectory of what passes for visual entertainment in today's media. Hollywood is obsessed with super heroes who use extreme powers to commit violence against more violent opponents.
Violence on steroids. A virtual Colosseum, digitally enhanced.

The really disturbing thing is that nobody stops to question the bodycount, the casualisation. Yes we all love the story of goodies beating baddies in a morality tale, but we dont question the means. Which plays nicely into the hands of an industry that competes by upping the ante to sell sell sell.

Does it soften us up to the unthinkable? Does it inure us to dubious means that create "collateral"? I don't know. What I do know is that the line where fantasy meats reality is getting blurred.