Operation Burnham Inquiry Can Now Blame Civilian Deaths On “The Fog of War”. 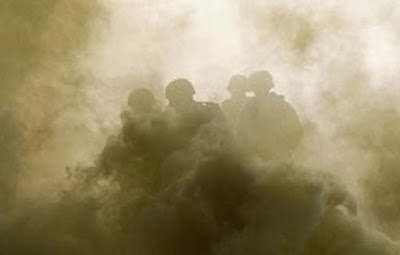 Impaired Vision: Judging from the invaluable testimony obtained from two Taliban commanders by Jon  Stephenson, video evidence may exist of a US gunship firing at fleeing insurgents, as well as the Tirgiran villagers fleeing with them. Such a sequence would lend credence to the accounts of both the NZDF and the claims of the book Hit and Run. We may not get to see the video, but it is reasonable to anticipate such evidence playing a major role in shaping the official inquiry's final judgement of the tragedy that was Operation Burnham.

THIS MORNING [20/6/19] the Operation Burnham Inquiry (OBI) faced an oncoming avalanche of criticism which seemed certain to bury its final report in public disfavour. From the very beginning, the conduct of the Inquiry has been called into question, and the Inquiry heads, Sir Terrance Arnold and Sir Geoffrey Palmer, dismissed as the Crown’s diligent defenders.

In both journalistic and satirical mode, I, too, have joined in this blackguarding of the OBI. Like so many others on the Left, I was convinced that its secrecy-shrouded deliberations could not possibly be trusted to deliver a truthful rendering of Operation Burnham and its consequences.

That changed this morning, when one of the authors of Hit & Run, Jon Stephenson, in an article for Stuff, and again on RNZ’s Morning Report, informed New Zealand that he and his co-author, Nicky Hager, had erred in declaring that no Taliban insurgents were present in Naik, the village attacked by New Zealand SAS troopers, supported by US helicopter gunships, during Operation Burnham.

Two years of painstaking and highly dangerous research on the ground in Afghanistan had led Stephenson to at least two Taliban insurgents who had been taking refuge in one of the mountain villages targeted by the NZSAS. These fighters freely admitted that they had, as the NZ Defence Force always insisted, participated in the attack that killed the New Zealand infantry officer, Lieutenant Tim O’Connell, three weeks earlier.

This new information has the potential to dramatically shift the public’s perceptions of Operation Burnham. In essence, it admits into what has been a highly polarised public debate concerning the events of the night of 21-22 October 2010, a measure of the confusion and uncertainty that inevitably accompany all such military operations.

Those who insist that the raid killed 6 civilians and injured 15 more will not be moved; nor will those who are adamant that the NZDF killed 9 Taliban insurgents. But, for the vast majority of New Zealanders, who fall somewhere between these two extremes, Stephenson’s correction of his own, and Hager’s, original story will transform the whole event into something much more opaque. As of this morning, the black and white certainty of Hager, and the villagers’ lawyer, Deborah Manning, will be overwhelmed by fifty different shades of sceptical grey.

Stephenson’s refusal to condemn the OBI, its chiefs, Arnold and Palmer, or the investigative work its staff have undertaken, will also give a great many hitherto critical observers, like myself, serious pause. If a journalist of Stephenson’s standing feels comfortable in talking about the “mana” of the Inquiry, then perhaps there is hope that it will not present New Zealanders with the highly redacted “whitewash” its critics have consistently predicted.

Certainly, Stephenson’s latest revelations offer the OBI the opportunity to take up a position midway between the claims of the NZDF, and the account of the operation represented on the pages of Hit & Run. Clearly, the intelligence supplied to the International Security Assistance Force (ISAF) in which the killers of Lieutenant O’Connell were said to be hiding in the Tirgiran Valley, was correct. It is also clear, from the testimony gathered by Stephenson, that these fighters were being sheltered in the village of Naik. On the other hand, it is equally clear that ISAF’s American helicopter gunships, in attempting to kill the Taliban insurgents, inadvertently killed and injured a number of Afghan civilians.

In answering the obvious question: Why didn’t the NZDF admit that these civilian deaths had occurred?; it seems highly probable that Arnold and Palmer will be obliged to deliver a judgement highly critical of the NZDF’s conduct subsequent to the Operation Burnham raid.

Even more uncomfortably, if the NZDF’s obfuscation turns out to have been inspired by American sensitivities regarding the part played by their helicopter gunship/s (and its/their supposedly defective gunsight/s) in killing Tirgiran villagers, then the painfully restored relationship between New Zealand and its “very, very, good” American friends will come under strain. If any sections of the OBI report end up being heavily redacted, it will be those relating to the interactions between the NZ forces on the ground in the Tirgiran Valley, and the US forces hovering above it.

Included in that redaction will, almost certainly, be the US helicopter’s on-board video recording of the action. Judging from the invaluable testimony obtained from the Taliban insurgents by Stephenson, that video may well include a sequence showing the gunship’s pursuit of the fleeing fighters, along with the gunning-down of the Tirgiran villagers fleeing with them. That sequence, by proving both sides correct, is crucial. We may not get to see it, but it is reasonable to anticipate that the withheld video will play a major part in shaping Arnold’s and Palmer’s final judgement of the tragedy that was Operation Burnham.

What they will have observed in the video is know as “the fog of war”: a phenomenon as old as human conflict itself. Its depiction of the confusion and lack of information that almost immediately overwhelms any military operation will communicate all that anyone can, or should, know about the NZDF’s honourable, but botched, attempt to avenge a fallen comrade; and the unintended civilian deaths and injuries for which some unknown NZSAS trooper/s, and airborne American machine-gunner/s, are responsible.

This essay was originally posted on The Daily Blog of Friday, 21 June 2019.
Posted by Chris Trotter at 11:15

Chris
You continue to impress me with your willingness to admit you have changed your opinion because of new facts. One can only wish that there were a lot more like you, rather than the cast iron intransigence shown by many other commentators. I note Ms Manning and Mr Hager believe the bombshell changes nothing. That says more about their mindset than they would like to admit.
However, there is still some confusion on the facts. Why did it take two years for this information to come out. And who died? One of the "civilians" supposedly killed was a relative of the men the military were seeking. He was last seen picking up his assault rifle as he left the house. When does a civilian become a fighter?
Chris Morris

I haven't followed the case, so comment on that. Will ask why the hell we were in Afghanistan in the first place. Sort of a rhetorical question, because I know the answer. But in spite of what Wayne Mapp keeps saying, we don't seem to have done the slightest bit of good, and the place is no more stable now than when we first went there.

Chris,
This does not relate to your current post but to an earlier one which contained a detail which has been bugging me for some time. According to you nine tenths of the German army was engaged on the Eastern Front at the time of the Normandy landings. Now, whilst totally accepting your overall point that the bulk of the German army was engaged in the East that figure struck me as too high. But I could not find a source which gave me a clear figure. Now I have, Overy's RUSSIA'S WAR p. 240, which says that at the time of the D-Day landings Germany and her allies had 228 divisions on the Eastern Front and 58 in the West. That's eight tenths to two tenths not nine tenths to one tenth. IF we cut out the allies on the Eastern front – the Hungarians, the Rumanians and the Finns, the proportion is likely to be even higher, perhaps seven tenths to three tenths.

I'm not particularly surprised that the book has errors. I've given up reading conspiracy books as they are invariably awful reads and I distrust their accuracy. The act of making a full book out of sufficient material for a chapter or two leads to enormous amounts of repetition and massive hypotheticals couched in terms to ensure the author doesn't get sued. Events are open to interpretation and it's easy to apply a rationale that is highly prejudiced (ask a lawyer) and the obvious massive bias and suspension of reasonable interpretation of most conspiracy theory authors leads to an inability to believe them. Hanlon's razor applies more often than effective conspiracies. Even when there's a solid kernel of truth the associated waffle detracts from a reasonable read. Style wise they normally have more in common with Erik von Daniken's manufactured conclusions than any solid analysis.

I have read several of Hager's books before I gave up some time ago and felt his initial conspiracy books were more reasonable (but barely readable) as I think he had more solid material and greater restraint than his later books. The later ones draw longer and longer bows and his desperation to release prior to the election to aid book sales or influence the election or both meant he persuaded Stephenson to override any concerns regarding potential inaccuracies he may have had according to Stephenson.

Of course, it's well possible the NZDF did wrong and are trying to cover it up but it's also possible the villagers are lying for personal gain. I doubt we'll ever know for sure but I wouldn't base any opinion in anything Hager proffers as I don't trust his motives or his ethics. Yes - I haven't read and have no intention to read the book. I've learnt my lesson.

All Mr Hager and Mr Stephenson did with their shitty book was to besmirch the good name of the NZDF and the NZSAS.

It is called war and shit happens.

Perhaps Mr Hager, Mr Stephenson and Ms Manning would like to go and do some frontline service in the Muddle East.

To paraphrase Bismarck, " The Muddle East is not worth the bleached bones of one New Zealand infantryman ".