Global Protests Rage On: But Slogans Are Not Plans. 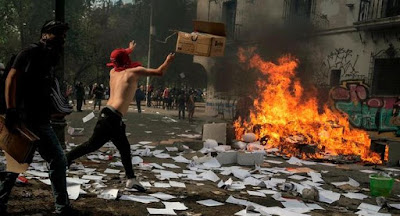 Feeding The Flames: It is simply not enough to demand an end to “corruption”, or “inequality”, or the overbearing influence of the authorities in Beijing. These are just “lowest common denominator” demands: the sort of slogans that pull people onto the streets. They are not a plan.

WHERE’S THE PLAN? Across the planet massive protests, like Californian forest fires, rage out of control. In Santiago, Chile, hundreds-of-thousands march and are met by tear gas and water cannons. In Hong Kong, the confrontations between protesters and police have become almost routine. In Beirut, the crowds, having already brought down Lebanon's Prime Minister, are now going after its President. But what do they want? Where’s the plan?

It is simply not enough to demand an end to “corruption”, or “inequality”, or the overbearing influence of the authorities in Beijing. These are just “lowest common denominator” demands: the sort of slogans that pull people onto the streets. They are not a plan.

There’s reason for this lack of specificity. The moment a protest movement begins to consider specific reforms it opens itself up to debate and division. Unity, difficult to maintain at the best of times, seldom survives the democratic consideration of political alternatives. The moment competing reform programmes are presented, and the mass protest movement begins sorting itself into supporters and opponents of the specific measures being proposed, politics rears its ugly head. The intoxicating unanimity of chanting slogans in the street gives way to the peevish horse-trading of constructing a viable political alternative.

In the end, you can’t keep politics out of politics. A crowd is not a deliberative instrument – no matter how earnestly the Beirut masses insist that it is. Faced with the protesters’ fantasy, the exasperation of Lebanese parliamentarians is entirely understandable. In spite of their guarantees that the grievances of the people have been heard, and will be answered, the crowd stubbornly refuses to disperse. Their massive presence is all they bring to the table. It is not enough. Short of embracing the direct democracy of Ancient Athens, the crowd must, at some point, allow their elected representatives to do what they do.

The unreality in Hong Kong is even more pronounced. What do the protesters expect the Territory’s administrators to do? Set up an independent city state on the model of Singapore? Except, of course, their city state – unlike Singapore – will be defiantly democratic. But, no one seems to have a believable answer when sceptics demand to know under whose protection this independent democracy will be established?

Are the young people in the streets proposing to throw themselves back into the arms of the United Kingdom? Or do they want Trump’s United States to be their new sugar-daddy? And China? What do they suppose the People’s Republic will be doing as the Hong Kong population lines up for a second helping of imperialism? Do they really suppose that Beijing will cheerily wave good-bye as its most important financial hub simply walks away?

It is precisely to keep Hong Kong within its grasp that Beijing has ordered the Territory’s police to avoid the use of deadly force. Clearly, it is the Chinese Government’s intention to wait the protesters out. At some point, Beijing knows, these youngsters will begin to ask themselves how long they’re prepared to postpone completing their university studies. They will also begin to wonder whether the Territory’s extensive surveillance capabilities have placed their personal details on file. And, if they have, how might that affect their future careers?

If, however, the protesters are able, somehow, to convince the rest of Hong Kong’s population to follow them into the arms of the imperialists, then Beijing would no longer have any reason to exercise restraint. The People’s Liberation Army would be unleashed upon the youth of Hong Kong with exactly the same orders it carried into Tiananmen Square in 1989. The resulting bloodbath would be carefully scaled to put an end to any thoughts mainland Chinese youth might have of emulating Hong Kong’s example.

The poor and the marginalised throughout Chile should also give thought to the intentions of their country’s armed forces. It took the democratic elements of Chilean society 17 years to persuade the generals to return to barracks. How likely is it that they will stay there if buildings continue to be torched and shops continue to be looted? How long will the Chilean middle-class remain committed to democracy in the face of the poor’s open contempt for the rights of private property-owners?

Over recent days, the language used by Chile’s right-wing President, Sebastian Pinera, has carried frightening echoes of the language used by Augusto Pinochet – the general who overthrew Salvador Allende, Chile’s democratically elected socialist president, in 1973. Rioting and looting, while undoubtedly cathartic, is not a plan.

Popular rage can frighten politicians: sensibly directed it can even chasten them. What rage cannot do, however, is serve as a substitute for reason. The young, well-educated Lebanese who are tired of economic mismanagement and corruption, and who long for the day when secular politics is able to replace the careful balancing-act that keeps the country’s Christian, Sunni and Shia citizens from engaging in communal slaughter, would be most unwise to confuse themselves for the Lebanese “people”. They may represent the best and the brightest which Lebanon has to offer, but they do not represent all of it. Has Hezbollah joined the protests in the streets? And what will happen if/when it does?

When the world witnessed the “Arab Spring” it waited in fervent hope for an Arab Summer that never came. The young, middle-class Egyptians who crowded into Cairo’s Tahrir Square demanded democracy. But, when they got it, the answer it provided to the question: “Who are the people, and what do they want?” was not at all to their liking. Within months, the soldiers were back in charge, and the people’s choice, the Muslim Brotherhood, were back in jail – or dead. In politics, as in no other human activity, people should be very careful what they wish for.

Planning for the future will always produce a richer harvest than merely wishing away the present. Protest, if it is to be effective, has to make more than noise – it has to make sense.

This essay was originally posted on The Daily Blog of Monday, 4 November 2019.

So why do we not thoroughly inspect and discuss the pros and cons of "peoples capitalism" as a worthy and measurable achievement, and the most effective and fair possibilities and plans of action towards achieving it ?