The Cost Of Compromise. 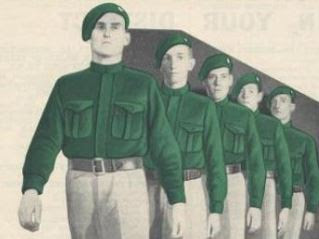 Not Brownshirts, Greenshirts: If you believe yourself to be in the midst of an existential struggle; and that every day which fails to bring you closer to absolute victory brings you one day closer to absolute defeat; then compromise isn’t just ill-advised, it’s morally indefensible. The goal must be power. Not power in combination with others, but power alone. Power that can be wielded without reference to anybody else. Absolute victory – the salvation of the biosphere – can only be secured by winning absolute power.

IF THE GREENS are to survive 19 September, they’ll need to draw inspiration from – of all people – the Nazis. Preposterous? Only if you refuse to understand that both the national-socialist and green movements have at their core an unwavering conviction that if they fail, then everything they hold dear will be lost. What separates the Greens from the Nazis is, of course, what they hold dear. Hitler and his followers were fighting for a myth – the German volk. The Greens are fighting for the survival of a very real and very vulnerable biosphere.

But what sort of inspiration could possibly be drawn from the political tactics of the most evil political party in human history?

The answer can be summed-up in a single word: compromise. If you believe yourself to be in the midst of an existential struggle; and that every day which fails to bring you closer to absolute victory brings you one day closer to absolute defeat; then compromise isn’t just ill-advised, it’s morally indefensible. The goal must be power. Not power in combination with others, but power alone. Power that can be wielded without reference to anybody else. Absolute victory – the salvation of the biosphere – can only be secured by winning absolute power.

This was Adolf Hitler’s crucial insight. He looked at the Weimar Republic, with its pure system of proportional representation, its multitude of competing parties, its fragile and ineffectual coalitions, and he bet his entire movement on the German electorate growing increasingly impatient with the political paralysis in Berlin. For a few years, from the mid-1920s until the onset of the Great Depression in late-1929, it looked as though he would lose his bet. But the collapse of the German economy, the descent of millions into poverty and despair, and the complete failure of “democratic” politics to meet the crisis, saw the Nazi’s share of the vote skyrocket.

Hitler’s contemporaries expected him to do what any other party leader would do in the face of such unanticipated electoral success: cut a deal. But the Nazi leader wasn’t interested in deals. Why would he enter into a coalition with the very parties who had proved themselves so incapable of doing anything to alleviate Germany’s suffering? Openly contemptuous of his electoral rivals, he didn’t promise to work with them, he promised to abolish them. Only one party, he said, could rescue Germany: the National Socialist German Workers Party. It would govern alone, or it would not govern at all.

As conditions in Germany grew steadily worse, and as the political centre crumbled and fell apart, it became clearer and clearer to the state bureaucracy, the army and the large capitalists, that if the Nazis were not given what they wanted, then an increasingly desperate German electorate would shift its support to the Communist Party. Rather than make a red revolution inevitable, the powers-that-be made a brown revolution possible. On 30 January 1933, Hitler was appointed Chancellor. Within six months his National Socialists were wielding absolute power. It was given to them to save Germany, but tragically they came close to destroying it. The human cost of Nazism’s fanatical pursuit of racial purity was colossal and its ultimate failure inevitable. Why? Because the German volk wasn’t real.

But anthropogenic global warming – climate change – is very real. And every day that is lost to compromise and drift does indeed bring global ecological catastrophe closer. Whether they are willing to admit it or not, everything human-beings hold dear is at risk of being overwhelmed by a disaster greater than any which has hitherto confronted human civilisation. To avert this impending global tragedy an international political movement is required. A global movement which absolutely refuses to compromise with the political, bureaucratic and corporate entities whose failure to take decisive action to combat climate change imperils human survival – along with that of just about every other life form on the planet.

The leaders of green parties around the world have largely chosen to turn their faces from this most urgent of political priorities. Rather than take a bet on the peoples of the world growing increasingly willing to throw their support behind an uncompromising international movement dedicated to radically reducing greenhouse emissions and implementing a “Green New Deal” to redirect the world economy away from fossil fuels and exploitative industrial production, these green leaders have opted to “do a deal”. They have joined hands with the very people who created the crisis and who have consistently declined to end it.

New Zealand’s Green Party has proved to be no exception in this respect. Its co-leader, James Shaw, not only refuses to bet on the people coming round to the need for urgent and ruthless change, but he has also fetishized “compromise” to the point where any attempt to draw a line in the sand is met with a rolling of eyes and statements like:

“Finding the path of least resistance. There’s that horrendous phrase about politics being the art of the possible, which can be read two ways.

“You can do things, it’s a really expansive notion. And there are some moments where we have changed things.

“And then there are others where you can only do what is possible. Maybe moving from naivety to experience is being able to live in both those worlds at the same time.”

Unfortunately for Shaw, humanity has only one world to live in, and it is running out of time. As the climate crisis deepens, and the failure of democratic politics to adequately address the need for radical change opens the way for more uncompromising parties, the politicians who continue to throw in their lot with the problem, rather than the solution, will be swept aside. For Shaw and his increasingly irresolute colleagues the electoral broom is approaching with unnerving speed.

Over the past three years, all the voters have received from the New Zealand Greens are pallid non-solutions. These, the fruit of the party’s craven unwillingness to call Labour and NZ First’s bluff, have been justified as the best outcomes available from a dispiriting range of “realistic” options. Together, they have brought the Greens’ nothing but a steadily declining share of the Party Vote. Political “realism” is Labour’s brand. If all they are offered in September is a choice between compromises of ever-decreasing effectiveness, then many Green supporters may elect to make no choice at all.

This essay was originally posted on The Daily Blog of Tuesday, 9 June 2020.
Posted by Chris Trotter at 10:20

There is nothing but climate change now, just like there was nothing but war in 1939. Just the way the crisis approaches... will ruin my old age(not a boarding house, 'The Road"!)

Labour has as much a burden on it to not compromise, shirley?

I think you need a Ph.D to follow you, Chris. Between the realpolitek and idealism. Why the masses aren't involved in everyday politics. Like horses, you have to be trained up to it from birth like we old New Zealanders.