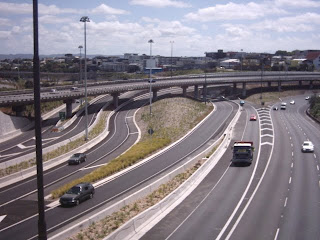 I know a regular column must sometimes be more sausage factory than magnum opus but geeze talk about a work of fiction.

“Auckland, as a viable commercial centre, owes its existence to the war made possible by Mr Russell’s Road”

Historically unsupported by the evidence. Auckland was a place of commerce built on trade before the Gt South Road and the Land Wars. Maori were exporting to Sydney via Onehunga prior to the Lands War. Arguably it was a place of (commerce barter and exchange) in pre European history. War is only ever good for business for some, peace is better for business for more.


“It’s been a constant struggle – to secure this public subsidisation of private greed – and at the forefront of the public fightback has been the Auckland Racket’s perennial rival: the state-owned railways.”

The left would have us that roads are public good i.e. non payers cannot be excluded therefore the government (central and local provides them) Don’t car owners pay income taxes, exercise taxes and rates towards the cost of roads? And of course railways generally (and urban transport on rail) have never been subsidised have they? Doesn’t Auckland pay a lot of taxes?

There is no economic analysis anywhere in the world that shows urban rail transport is cheaper or more efficient than cars. What is it with the left and the trains? Why are they fixated on the mode and not the maximum personal mobility?

My how fashions change; the old enemy the slum landlord is now the friend of the proletariat.

Hmmm and look that the 1st Labour Government’s ideal urban form – did they build five story apartment blocks with no private open space. How did those class traitors and sell outs regard compact urban form?

Excellent post Chris and a succinct drawing together of a number of conspiracy theories that I have heard recently which regrettably all ring true.

You did not mention the "road of significance" that is proposed to be built from Puhoi to Wellsford, two lane and a cost of $2billion. For about the same we could build the Queen Street rail tunnel and double the number of train passengers that can travel into downtown. One will allow Aucklanders to get to their christmas destination quicker and allow coastal development, the other will support the compact city ideal and give a great boost to the rail system. Guess which one has the support of the current Government?

The proposal to carve Rodney in half only made sense to those who do not believe that a compact urban form reduces the need to drive and burn petroleum and those who believe that their particular piece of land should be at the end of a highway so that their personal wealth would be increased. I would love to see the names of those who privately lobbied for Rodney to be carved in half and to investigate their land holdings.

And Chris Diack has been trotted out to try and blur and derail your comments. You should regard this as a compliment.

He suggests that the car is the ultimate in transportation and trains are a poor second. Can he explain why trains are so popular in New York and London and Shanghai and Tokyo and ...

According to him the rail tracks should have been torn up decades ago.

His theory is interesting. Because the first Labour Government did not forsee the importance of Urban Form in 60 years time us lefties should disregard it now.

Is he being serious?

I'm guessing you've also ignored the Waikato Expressway in the opposite direction, that since the early 1990s has gone from the Bombays to south of Mercer, with a segment north of Huntly, and the Nats promising to plug the gap so it runs all the way from Huntly north to Auckland (again given the accident rate it isn't hard to justify). Auckland can happily sprawl both ways.

Mickysavage: I'm curious that those on the left decrying the planned motorway north of Puhoi (which I am sceptical about on pure economic grounds) as being a holiday highway, yet Northland politicians regard it as critical to connect that region to the rest of the country. It's so Auckland-centric to think that it's about Aucklanders going north, not goods and people coming south.

Of course rail is popular in New York, London etc because enormous cities with high urban density can never have enough road space for much private motoring, and the cities grew with such systems in place decades ago. Outside the centre of those cities though, cars are very important, just most NZers don't go far from Manhattan or the West End to realise it.

"What is it with the left and trains" asks Chris Diack. Why not just focus on personal mobility? A very good question. The answer is that when you have got somewhere, will that somewhere be worth getting to? If it is filled up with cars, it will not be, at least not outdoors. For more on this see "Transport and Quality of Life" on http://transportblog.co.nz/ . In New Zealand, especially since Rogernomics, our political and business elites tend to see only the private space inside buildings as having any value as a destination, and the public space between to be filled up with cars by default. As a letter to today's (2 October 2009) Herald has it, there is a "diseased culture" on transport in New Zealand. This is really a symptom of a wider blindness to the civic realm, a diseased culture full stop. That opposition to the neglect of public transport has become a left wing cause is a symptom of this diseased culture. That is to say, "of course" the left will stick up for the commons--they always do--but what has become of elite-level support for the civic realm? All those wonderful buildings and plazas in Europe, which are now serviced by trams so as to keep the cars out, were created by the aristocratic and wealthy merchant classes. Our elite, which to a large extent sets the cultural tone, has simply abdicated on this issue and so civics have become a left wing cause by default. It's pretty dismal.

The proliferation of motor assemby plants in this country in the fifties may well have helped promote the construction of motorways.

oil won't last forever, and one way or another change will be forced on us, whether we like it or not.