From Cock-Up To Conspiracy 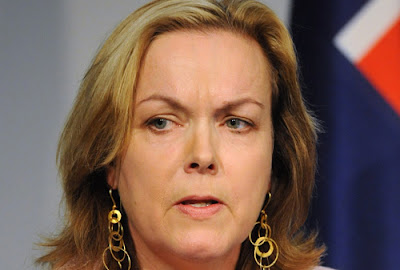 The Minister Is Not Amused: Determined to proceed with defamation actions against Trevor Mallard, Andrew Little and Radio New Zealand, Judith Collins is but one of many National Party grandees caught up in the unedifying, fratricidal political scandal arising from the inadvertent release of 6,700 ACC files to National Party activist, Bronwyn Pullar.
A HARRIED EMPLOYEE of the Accident Compensation Corporation, attempts to focus on the next complaint. It’s already past six o’clock and she is worrying about her family. She texted her husband an hour ago that she was going to be running late, and would he pick up something for tea, but he hasn’t replied. She’s worried about her nine year-old daughter – it’s more than three hours since school got out and there’s nobody at home but her.
Damn these bloody complaints! More and more of them every day and the Corporation’s already seriously understaffed. She skim-reads the e-mail from Bronwyn Pullar, her fingers fly over the keyboard, calling up the requested information from the Corporation’s complex data management system. Her cell-phone beeps twice. She picks it up. It’s her husband. He’s also stuck at work. Dammit, dammit, dammit! She hits send.
Could’ve happened like that – couldn’t it? The unauthorised release of more than 6,700 ACC client records is much more likely to be the result of a simple cock-up than a deep and dark conspiracy – isn’t it? And if that cock-up had sent those 6,700 records to anyone but Ms Pullar’s computer, wouldn’t they, almost certainly, have been sent back to ACC by the person who received them, accompanied by a strong recommendation that the Corporation upgrade the security of its database?
Of course they would. But, they weren’t. And Ms Pullar was on a mission. Ms Pullar had been trying to get the ACC to do something to upgrade the security of its database for years – to no avail. So, when 6,700 unauthorised files arrived in her In-Box, Ms Pullar: ex-National Party activist; friend of Cabinet Ministers; former corporate communications manager; and long-time client of ACC, following a severe road accident; required no assistance in recognising the huge, bureaucracy-shifting lever that had serendipitously fallen into her lap. Nor would she have hesitated to contact her close friend, supporter, PR maven and National Party insider, Michelle Boag.
And its right about here that things begin to turn very murky. So murky, in fact, that its easier to believe that what we’re witnessing is the unfolding of a fully-fledged political conspiracy, rather than a simple bureaucratic cock-up. Because somewhere between ACC headquarters and the Beehive, somebody decided that the actions of the person who alerted the news media to the unauthorised release of 6,700 ACC records – and those of her “support person” – should be placed in the public domain.
Just think about that for a moment. Because what we’re looking at now isn’t the easy-to-make, hard-to-forgive error of a harried and momentarily distracted civil servant. No. What we’re looking at now is a cold-blooded act of political demolition. An act fraught with multiple and serious political consequences – up to and including the resignation of a hard-working and widely respected member of the National Party-led government. Whoever released the details of Ms Pullar’s and Ms Boag’s interactions with the ACC must have understood that it could lead the news media straight to Nick Smith’s door.
Clearly alarmed at the potential damage this information could inflict on the National Party, Ms Boag contacts the Minister responsible for ACC, Judith Collins, and informs her of her own and Bronwyn Pullar’s involvement in the case. Ms Collins immediately passes on Ms Boag’s communication to the ACC Board Chair, and to its CEO.
In very short order the names of Ms Pullar and Ms Boag appear in the news-media. As feared, a letter written by Dr Smith, on Ms Pullar’s behalf, whilst he was the Minister for ACC, is released and he is forced to resign.
The National Party is thrown into considerable confusion. No one seems to know whether the leaking of the information concerning Ms Pullar’s use of the 6,700 inadvertently released client files (by now the subject of both a Privacy Commission inquiry and a Police investigation) and the subsequent exposure of Ms Pullar’s and Ms Boag’s identities (also the subject of a Privacy Commission inquiry), are part of a single conspiracy, or whether multiple conspirators are at work.
Speculation, fanned to red-hot levels of intensity by the parliamentary opposition parties and an odd assortment of left- and right-wing bloggers, advances the idea that what the country is witnessing is a “faction-fight” to secure the post-2014 succession. According to this version of events, National’s leader, John Key, has decided not to seek a third prime-ministerial term, and his two most likely successors, Judith Collins and Stephen Joyce, are vying with one another for the title of heir apparent.
More leaks, followed by counter-leaks, have exposed to public view an alarming and hitherto unacknowledged world of political cronyism and influence-peddling. Regardless of the rights and wrongs of the original, almost certainly inadvertent, bureaucratic snafu, this whole affair has now become a single, unedifying, fratricidal, mess.
This essay was originally published in The Press of Tuesday, 3 April 2012.
Posted by Chris Trotter at 10:37

The likelihood of Ms Pullar being the “snafu’ recipient is at similiar odds to winning Lotto, seriously long but not totally impossible.

Will be interesting when the Natz ‘powerball’ finally pops up in this draw.

Chris, it may very well be ugly and unedifying but it is also developing into a compelling and delicious political opera. If it were a piece of music, we'd be about eight minutes into Bolero - call me huffy and overly partisan if you wish but I simply can't wait to hear the crescendo.

On a related matter, the media's obsession with Judith paying her own legal fees for her multiple defamation actions has me thoroughly bemused. Isn't this just yet another case of newsrooms headlining a dog-bites-man story or is it actually convention in Aotearoa for politicians to fund their legal actions from the public purse or party coffers (genuinely confused)?

As Tiger Mountain notes, it seems almost implausible that the original email was sent accidentally. How do you accidentally add 6700 private names to an email, when anyone should know that getting them anywhere near the virtual world is a recipe for disaster.
We have been done a very significant favour by the subsequent leaker; without which we would not know the National Party connections; or that the claim was for $14 million; or that there was a strong suggestion of blackmail involved to achieve that sort of claim. So while Ms Pullar's privacy may have been technicaly breached, she does not deserve much if any sympathy. In my view, Nick Smith's issues were not only that he clearly left the impression with his own staff that he supported Ms Pullar; but that he had not in fact strongly advised her that he could not possibly support a claim for $14 million, or even with a decimal point less. He can not easily be trusted with the government's purse strings, if he takes such an apparently casual view of spending $14 million of its money on National Party friends.

Everyone is missing the fun part though, Pullar's original hassles with ACC in the first place. They were questioning her fitness for work before she claimed. This is a direct result of the National party telling ACC to get tough on claimants. Delicious irony, and it's all being lost under the political brouhaha. Dammit, does no-one have a sense of humour any more?

As the ironic cad character used to say in 1930s movies: "Blackmail is such a terribly ugly word".

Is this the wrath of faction
And intra-party war?
Or will the tumult yet subside
And all be as before?

If so, let's hail those happy few,
Good friends of Joyce and Key,
For whom the heavens still smile
And lunch is sometimes free.