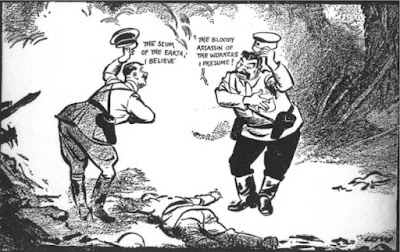 DUNEDIN IS THE BIRTHPLACE of, for my money, the world’s greatest cartoonist, David Low.

At the height of his powers, in 1930s London, Low’s cartoons represented the visual conscience of the civilised world. His most famous cartoon, “Rendezvous”, penned a few weeks into the Second World War, depicts Adolf Hitler greeting Josef Stalin over the prostrate body of Poland. “The scum of the earth, I believe.”, says Hitler, bowing and lifting his cap. “The bloody assassin of the workers, I presume?”, Stalin responds, mirroring his enemy’s gesture.

The cartoon’s brilliance lies in its multiple layers of meaning. The dictators’ outlandish greeting echoes the famous query of the American newspaperman, Henry Stanley, upon encountering the celebrated Victorian explorer and missionary, David Livingstone. “Dr Livingstone, I presume?”, the American is said to have enquired. Low has taken the greeting, originally uttered in the heart of darkest Africa, and set it in the heart of what is now an even darker Europe.

The cartoon also captures the mind-numbing cynicism of the Nazi-Soviet Pact. Hitler and Stalin, for so long sworn ideological foes and living symbols of their mutually exclusive systems, are shown politely setting aside their differences. Low is defying his audience to imagine a more ruthless assertion of realpolitik.

The cartoon’s masterstroke, however, is its dark humour. Politically, Low’s joke is a clever one, guaranteed to raise a grim chuckle. In wringing this response from his audience, however, Low is not attempting to gloss over the horrors of the war now raging. These he suggests in just a few deft strokes, but the sense of unending destruction and death is palpable. “And yet,” he seems to be saying, “we can still laugh. All is not lost.”

At the heart of all effective satire is radical sympathy. It draws from us not scorn but pity; not a sneer or a guffaw, but the sort of righteous anger that one finds in the mouths of Old Testament prophets. True satire: written, visual or dramatic; makes us laugh in the way Low makes us laugh in “Rendezvous”. The humour is drawn not only from the absurdity of the situation the cartoonist has contrived, but also from the shock of recognition. We get the joke, but we also get the message. Low has made us complicit in his protest. Forced us to stand with him in solidarity. He has made us do something. He has evoked radical sympathy.

Low’s radical sympathy is what sets him apart from so many other New Zealand cartoonists and satirists. For some reason, Kiwis are made uncomfortable by the sort of satire that – in the superb formulation of the American humourist, Finley Peter Dunne – “Comforts the afflicted and afflicts the comfortable.” With a handful of notable exceptions, Kiwi satirists have preferred to be the enabler of the bully and the boss; offering their audiences the vicarious thrill of watching the weak get hammered.

I well recall the allegedly satirical television series McPhail & Gadsby. While David McPhail’s depiction of Rob Muldoon was superb, it was also adulatory. Invariably, Muldoon’s political antagonist, Bill Rowling, was presented as a weak and contemptible figure who deserved every whack “Muldoon” gave him. McPhail & Gadsby thus provided an invaluable service to the National Government of the day and its redoubtable Prime Minister – Rob Muldoon.

It is easy and, one suspects, extremely tempting to cross over the line from satire to propaganda. To become, as the Americans say, a “suck up, kick down, kinda guy”. Easy, too, to court the applause of the majority by refusing to challenge their idées fixes about all manner of controversial subjects.

Just imagine if Low had been one of those guys. Instead of standing resolute (alongside the politically marginalised Winston Churchill) against the horrors and dangers of Nazism, Low would have taken the much easier – and popular – road of appeasement. He could have made a hero out of Neville Chamberlain, even rendered the German Chancellor sympathetically, and made fun of the friendless Czechs. Who would have complained? Certainly not the Nazis.

But that was not the road Low elected to travel. He kicked up against the threat of Nazism so forcefully that Hitler had him marked down for immediate execution should Great Britain fall. Low later described his inclusion on that list as the greatest honour of his professional life.

This essay was originally published in The Otago Daily Times and The Greymouth Star of Friday, 13 December 2019.

It is hard to find a Low cartoon that does not have resonance now in some way. One a day would not be enough

Low's cartoons have stood the test of time. I was always a fan of Art Buchwald and Mike Royko who did similar things but with words. They both still resonate on rereading.