A Party Of Honourable Men? 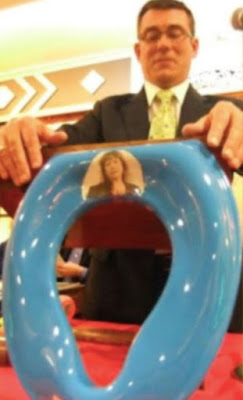 Reprehensible: There is much that could be said about Michael Woodhouse, but what would be the point?  Any man who willingly involves himself in a situation as reprehensible as the one depicted in the above photograph has already vouchsafed all that decent people need to know about his character. That there have been no reports of the National MP apologising to Clare Curran, or making any other attempt to atone for this vile incident, merely confirms the futility of pursuing Mr Woodhouse any further.

IT’S ONE OF those rules that every politician lucky enough to have a responsible political mentor learns very early. Never say or do anything that you wouldn’t be happy to see reported on the front page of the daily newspapers.

The former National Party Prime Minister, John Key, must have been blessed with such a mentor at a very early age. No matter how hard the Labour Party trawled through Key’s past (and they trawled very hard indeed!) they always came away empty-handed.

This absence of dirt was all the more remarkable given Key’s chosen profession. Currency traders are notorious for their reckless lifestyles. But, while the future prime minister’s friends and colleagues were winging their way across the Atlantic to sample the manifold delights of New York and Las Vegas, Key was on his way home to his wife and kids in the suburbs. It was almost as if he was proactively protecting himself from the sort of past his political enemies would one day be desperate to exploit.

Clearly, National’s Michael Woodhouse has never made the acquaintance of a responsible political mentor. Had he done so he would never have allowed himself to be photographed holding up a toilet seat with Dunedin South MP Clare Curran’s face attached to it.

One must assume that Mr Woodhouse is far from happy that the image in question, and all it says about him, is everywhere on-line and in the news media. Moreover, if National’s Health spokesperson really has no memory of the circumstances in which this disgusting photograph was taken – and Mr Woodhouse insists that he does not – then he is far beyond the help of any sort of mentor.

Perhaps he should learn how to pray?

There is much more that could be said about Mr Woodhouse, but what would be the point?  Any man who willingly involves himself in a situation as reprehensible as the one depicted in the photograph has already vouchsafed all that decent people need to know about his character. That there have been no reports of the National MP apologising to Ms Curran, or making any other attempt to atone for this vile incident, merely confirms the futility of pursuing Mr Woodhouse any further.

The only entity worth pursuing in this whole sordid story is the National Party itself.

The comic maestro, Groucho Marx, once quipped that he could never join any club that was prepared to have him as a member. What, then, does it say about National that eight years after allowing himself to photographed displaying that appalling toilet seat, Mr Woodhouse remains a member in good standing of both the National Party and its caucus?

More importantly, what does it say about National’s new leader, Todd Muller?

For the sake of argument, let’s give Mr Muller the benefit of the doubt and say that he knew nothing of the toilet seat with Ms Curran’s face on it: that he was as shocked and appalled by its crudity as every other decent New Zealander. But if, as we all hope, that was Mr Muller’s reaction, then are we not entitled to ask why he didn’t take the next obvious step of demanding Mr Woodhouse’s immediate resignation?

Because that is what any decent, honourable leader of a political party looking to become the next government of New Zealand would have done. Such a leader would have transformed this sordid stain on his party’s reputation into a learning opportunity. He would have made it clear to every member of his caucus and party that anyone deriving any sort of perverse excitement from such scatological misogyny had no place in either. He would have used the occasion to reaffirm his determination to elevate politics above the bloody cruelty of the bearpit. To make of the word “honourable” something more than a perfunctory honorific. And, finally, to demonstrate his bona fides, Mr Muller would have tendered his apology to Ms Curran on behalf of every National Party member.

At the time of writing, however, Mr Muller has made no obvious effort to do any of these things. Mr Woodhouse remains a member in good standing of the National Party club.

Which raises the obvious question: If this malodorous boot was on the left foot of New Zealand politics, what would Jacinda Ardern be expected to do?

This essay was originally published in The Otago Daily Times and The Greymouth Star of Friday, 10 July 2020.
Posted by Chris Trotter at 07:02

The only entity worth pursuing in this whole sordid story is the National Party itself.
...........
When you look at the mess politics is today you ask: "what should we do?" Then you realise there is no us. To function a society needs sufficient commonality. For example "what should we do about China?". Reading Interest.co.nz you have pro-China Kiwis with Chinese sounding names (starting with X). Meanwhile local Maori are complaining about dioramas at the Canterbury Museum. Formally the directors stood by the depictions as "accurate representations". Now Maori are the authority. Labour decided "diversity has been of immense benefit to the country and will be even more so in the future". Labour also made Academics the "eyes and ears of the community" and thereby privileged social justice over truth. Labour increased societies error. Labour's job was to protect New Zealanders from neo-liberal excess instead it went hand in hand until relatively recently when it back pedaled (a bit). The "workers" Labour did privilege however were the left-wing lackeys in the Universities.

Your analysis of Woodhouse’s behaviour in the past and more recently is quite accurate Chris. Would that our sensitive media have pursued him with the same relentlessness as they and he pursued Clark. For all Clark’s misjudgements, no one is suggesting that he is as nasty as Woodhouse has shown himself to be. What these ongoing revelations reveal is the devious and unscrupulous culture that has become acceptable within the National Party. What chance our media friends, so beloved of “gotcha” journalism, might take a wider look at this issue? Let’s not hold our breath.

...and astonishingly in the NZ media bubble, not only having deliberately moved on from Woodhouses phoney "homeless man in the hotel" we now have at least two "journalists" saying that the idiot with Covid escaping custody from the smoking area is a worse thing for the Govt than the Walker Boag scandal. I never thought I'd say this living in Brisvegas, but the Aussie media are light years more responsible and nonpartisan than NZs at this moment when it comes to Covid.

Are you comfortable and confident that no image will emerge from your past (without context) Chris? I know you are not are not an elected representative, nor presume a moral authority, but you do seek and hold 'influence'.

A toilet seat handed around in misguided jock locker room combative spirit - is it really a moral failure and scar? Is the action so vile only because Clare capitulated so? I stand, no-one should take pleasure in that.

There have been rap songs about the rape of a politically connected family member (deliberately not more clearly referenced).

This person (Clare) was willingly engaged in the sport. I struggle to feel appalled.

Justin Trudeau blackface? We can draw bows the length of the Earth it seems.

Never heard the place referred to as Brisvegas before. Too many snakes in Oz for me, I thought NZ snake free, but looking at the media, maybe not. To borrow from Justice Mahon seems there is an orchestrated litany of lies going on.

We are all sinners, Frit, no question.

My own outrage in regard to Mr Woodhouse is born of the latter's failure to acknowledge his sinning and make some effort toward atonement.

Absolution follows confession, Frit, not the other way 'round.

As for your "misguided locker room combative spirit" explanation. No. I'm sorry, but that just doesn't wash. What that photograph shows is misogyny of a particularly unpleasant kind. The first step to overcoming such bad behaviour must, surely, be to acknowledge it as such?

Why can't Mr Woodhouse do even that much?

Captain Herr Muller peers into his binoculars as HMS Labour disappears ahead over the horizon. The SS Shambolic is full of holes and sinking under him and the big rats aboard are jumping. Suddenly it dawns on Muller that in his speed to take over captaincy he had overlooked securing the loose cannons.

Meanwhile aboard HMS Labour Admiral Ardern alone in her cabin quietly does another little dance.........

The loser in the Judith shift is WOODHOUSE, OR SHOULD HIS LAST MENTIONED portfolio Pike River, be the compleat loser.