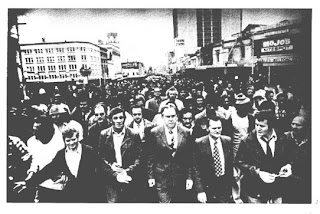 Blue collars, brown and white necks: Bill Andersen leads 10,000 workers up Queen Street in protest at the use of injunctions in industrial disputes. In 1974, the perceived interests of Maori and Pakeha workers had yet to significantly diverge.
WHEN did the working-class turn brown? When did it stop being made up, overwhelmingly, of white people? Was it in the 1970s, 80s or 90s? And, how did we miss it? How did the poorest New Zealanders’ ethnicity end up masking the burdens of their class?
Marching up Queen Street on Monday, my ears ringing with the haka and the chanting and the insinuating bellow of the Maori trumpets, I was bothered by a sense of déjà vu. Row upon row of brown faces, all of them bearing the moko of hard living on slim pickings, called forth a half-forgotten image from another march up Queen Street where, again, the faces were mostly brown.
Then, I remembered. It was a photograph published in the NZ Herald of 3 July 1974. Bill Andersen was on his way to court, and the cream of the Auckland working-class was going with him. Ten-thousand strong they marched that day – and even then the majority of the marchers were brown.
I’m looking at the picture now: Bill and his union executive (all white) are in the front row, but behind him bob the distinctive "afro" haircuts of his Maori and Pasifika members – thousands of them, marching in defence of their union and its boss, and for their right to a place in the South Pacific sun.
The Maori renaissance was in its infancy then: the divisive effects of what would later be called "identity politics" not yet strong enough to separate Maori and Pasifika workers from their Pakeha brothers.
When the National Government of Rob Muldoon gave the order to end the Ngati Whatua people’s re-occupation of Bastion Point on 25 May 1978, it set in motion one of the largest police operations in New Zealand history. As news of the massive eviction exercise spread, trade unionists on worksites all over Auckland walked off their jobs in protest, and the Auckland Trades Council (taking a leaf out of the NSW Builders & Labourers play-book) placed a "Green Ban" on the site – effectively stymieing the Government’s "redevelopment" plans.
The divisions came later, in the years following the 1981 Springbok Tour, when a disillusioned Bill Andersen was obliged to chuck an extreme Maori nationalist group out of the Auckland Trade Union Centre.
Ever since, race has trumped class in New Zealand left-wing politics. Liberal Pakeha have simply trained themselves to ignore the glaringly obvious fact that nearly all the jobs requiring a strong arm, and an even stronger back, have fewer and fewer white faces associated with them. Look at the building sites; the road gangs; in the factories and warehouses; behind the check-out counters – and you’ll see what I mean. As my friend, Matt McCarten puts it: "In today’s workforce you’ll find that almost every blue collar is worn around a brown neck."
And with only a tiny fraction of the private-sector workforce now unionised (last count 7 percent!) those blue-collars have had to look elsewhere for the strength that collectivism provides. Certainly, since 1991, the white, middle-class membership of the mostly public-sector organisations that make up the Council of Trade Unions have not displayed a noticeable willingness to defend anyone other than their own kind. Abandoned to their own devices, the young, unorganised, brown working-class has turned to the marae, the kura, the wananga and the churches for the cultural, spiritual, and – most importantly – the political leadership their parents formerly received from the class-oriented leaders of the old labour movement.
And so, Monday’s hikoi up Queen Street was all about special Maori representation on the new Auckland "super-city". Except, of course, no one asked the obvious next question: "If John Key relents, and gives us the three seats promised by the Royal Commission, who will sit in them?
Will it be men and women from the suburbs of the working poor? People who understand the importance of public transport, local parks, free libraries, youth centres and swimming-pools? Or will they be filled by media celebrities, business entrepreneurs, and slick corporate lawyers wearing thousand-dollar suits and hefty pounamu pendants?
The Maori Party has already answered that question: hongi-ing furiously with Iwi fat cats and right-wing Pakeha politicians; leading their people up the chute and into the works.
It was moving – hearing ten thousand voices chanting "Ka mate, ka mate!"
But Solidarity Forever is a better song.
This essay was originally published in The Dominion Post, The Timaru Herald, The Taranaki Daily News, The Otago Daily Times, and The Greymouth Evening Star of Friday 29 May 2009.
Posted by Chris Trotter at 14:07

That is a great post. I was right with you up to the end and clang - the bolt went in. Ahhh the cool breeze of outrage. Your analogy about the maori party leading their people up the chute into the works was inspired and ugly. I disagree with your view and your choice of song but it is good that you are writing top columns/posts like this. Kia kaha.

I do agree with you Chris.
If I may circle around the end of yr fine post:
My socialist mother has been with the Maori Party since it's inception, she helped pull down the fence in Gisborne at Rugby Park in '81, she has worked in marae during the TOPS days, works in welfare groups to this day and now?
According to her with 'Seabed and Foreshore' Maori were going to be banned from fishing? My point: the Maori Party is built out of and based on hysteria and misinformation that seems like one thing but, as the end of your post describes, is far from that.
A bit like last years election? We wanted change? We shoulda changed our undies.
Kia kaha for sure.

Nice post, 1974–84 were halcyon days for the Auckland Trades Council.

It might be useful here to employ the marxist definition of class, as being determined by an individual person or groups relation to the means of production. For a start: are you a boss (owner) or a worker (non owner). Then more interesting categories emerge. Owner drivers, self employed, working from home, these folks imagine themselves their own masters but finance capital in the form of banks usually has a tight grip on them.

Are administrative workers and mid level managers working class? yes in my view. Middle class is not strictly speaking a separate class, it is a socio economic category whose members may aspire to be a boss and often identify with bosses. Same with bright youung things in IT with their student loans, rented offices and gear owned by the banks. Bosses? I don’t think so. Entrepreneurs ditto. There are more categories of worker and work than Marx imagined but no more divisions of labour.

Most academics have shied away from an evidence based description of the class makeup of the NZ population, certainly in recent decades. Some years ago the Workers Institute for Scientific Socialist Education (WISE) what an acronym! engaged a Waikato university academic to research this, but he soon dropped his bundle unfortunately.

None the less union denisty is very low as Chris points out. Not surprising as our atomised society has lost the collective memory of co-operative social norms and forms. Or more accurately, unionism was almost eradicated by a generation of neo liberalism and the Employment Contracts Act.

It is a worry with not a squeak for instance from the PSA as their membership is sacked by the thousand. So it is important to have an accurate understanding of class.