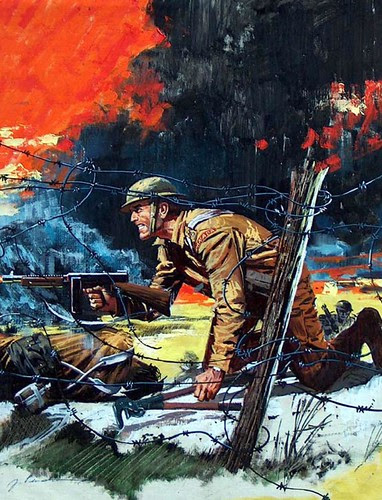 Lieutenant Russel Norman demonstrates for Labour the Green Party's latest tactic of "looking for areas of common ground where we can work together" in the Mt Albert by-election.

IN contesting the Mt Albert by-election, the Greens are running a very grave risk.
They might win.
"Oh yes," I hear you say, "and Aunt Sally ‘might’ win the next Lotto draw!" How likely is it, really, that the Greens will be able to pump their vote high enough to win the seat?
Well, according to the calculations of the man behind "Kiwiblog", David Farrar, it could happen. Okay, okay, we all know that Mr Farrar is a man of the Right, so there’s a strong temptation to mutter: "Well, he would say that, wouldn’t he?" And I’d agree, if it wasn’t for the fact that David’s best prediction for Mt Albert is a Labour win by 3,000 votes. This time, I think it’s fair to say he’s doing nothing more than the math.
How, then, does the Kiwiblogster see the Greens’ co-leader, Russel Norman, taking the seat?
Easy.
"If a poll shows National and Labour neck and neck, and Greens well back, then the Green vote may collapse to [the Labour candidate, David] Shearer. But likewise if a poll shows the Greens at over 15%, maybe even 20% - then they could make a strong play for Labour voters to vote Greens to give Labour a guaranteed future coalition partner (Labour can probably never govern again without the Greens)."
Now I just happen to know (through a particularly well placed source) that pollsters operating in the Mt Albert electorate have discovered that Labour and National are running neck-and-neck. (Mr Farrar, owner of Curia Market Research, may even be one of them!)
The complicating factor, according to my source, is that these same polls also show the Greens support is well up on their election night total of 11 percent – to something approaching, or maybe just a little ahead of, 15 percent.
This would explain why the Greens’ Mt Albert candidate, Russel Norman, has come out swinging against Labour’s Mr Shearer. According to the Greens’ co-leader, the former United Nation’s aid administrator is a "grey machine man" – hand-picked by Labour leader, Phil Goff, to bolster the strength of the Labour’s right-wing faction. Aghast at revelations that Mr Shearer is on record as being willing to contemplate the use of mercenaries in international peace-keeping, Mr Norman is now promoting himself as the only "progressive" horse in the Mt Albert race.
If the Green Party’s campaign organisers are serious about driving a wedge between Mr Shearer and Mt Albert’s progressive voters, they’ll organise a team of crew-cut, clean-shaven, black-clad and combat-booted "mercenaries", wearing forage caps and dark glasses, to march into every election meeting carrying "Private Contractors for Shearer" signs. Mr Farrar’s fellow right-wing blogger, "Whaleoil", has already produced a poster depicting Mr Shearer as "The Haliburton Candidate". (Endorsed, presumably, by Dick Cheney!)
Beyond the pale? A few months ago I would have said "of course!" and probably added something about the Greens not being that sort of political party. Today, I’m not so sure.
A few months ago, if the Greens had opted to stand a candidate at all (and with National polling so strongly across the country, they may well have decided the risk of splitting the "progressive" vote was too great to justify such a strategy) they would have chosen an unknown local enthusiast to fly the party flag, and left it at that.
What they’ve actually decided to do is parachute in Mr Norman, the Greens’ top-gun, along with his newly-acquired coven of media wizards, to use the opportunity provided by the Mt Albert by-election to build and enhance "Brand Green".
Of course, politics being a zero-sum game, building "Brand Green" can only be accomplished by the deconstruction of "Brand Labour". And that could see National’s Melissa Lee do what no Government candidate has done in 70 years – win an Opposition-held seat in a by-election. But, it could also see Mr Norman collapse Labour’s increasingly fragile support-base, unite the "progressive" vote, and pull off an historic victory.
Will it happen that way? Probably not. Mr Farrar’s best guess – that Labour will win with 3,000 votes to spare – remains the most likely outcome. But, in a way, that’s not the point. Simply by standing Mr Norman, and waging an aggressive campaign, the Greens are signalling that all is not what it was on the Centre-Left.
The children have left home.
This essay was originally published in The Timaru Herald, The Taranaki Daily News, The Otago Daily Times and The Greymouth Evening Star of Friday, 8 may 2009.
Posted by Chris Trotter at 14:36

Farrar is doing no more or less than promoting National by exploiting and manufacturing division. Commentator as would be organiser.

The green tactic is slightly less clear. No doubt the Greens longstanding internal divisions-are they red, blue or even green greens? underlies this. But could the Greens win? Unlikely. Yes elections are for standing candidates. They are also for behind the scenes nudging and winking. Hence we have Act wielding influence in Govt. beyond it’s party vote numbers due to an electorate arrangement with the Nats.

And of course the Green vote does appear to usually collapse on the night. Polling booth pens moving mysteriously, ouja board like, past the green leaf logo towards National or Labour.

There is much symbolism involved in who wins this Mt Albert by election, National wants it to extend it’s current triumphalism, Labour needs it to stop the rot and somehow begin rebuilding. The Greens either just want to be taken seriously as a contender or are moving to a more openly opportunist future.

Melissa Lee's performance on Q&A today, where she appeared to be talking up a surface road through the electorate, may have doomed National's chances.

Its quite possible many Nats, unable to stomach voting Labour may vote Green in protest.