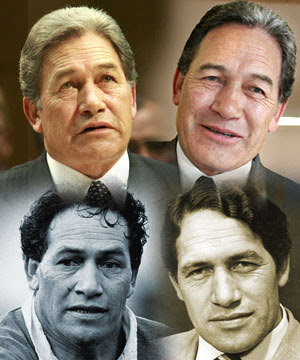 The many faces of Winston Peters: all of them, whether we like it or not - our own.
THE POLITICAL CLASS has never understood Winston Peters. Even when they thought they were stoning him to political death in the run-up to the 2008 election, they had no idea what they were really doing.
Peters is "us" – New Zealand – plagued with all our vices, and blessed with all our virtues. Drive him from Parliament and our democracy doesn’t become stronger – it becomes weaker. Banish his "redneckery" from public discourse and all you do is infuse it with the terrible allure of the forbidden.
When I think of Peters, I am reminded of the scene in Oliver Stone’s Nixon, when the beleaguered president stands before the portrait of JFK in the White House and says: ‘When the American people look at you, they see themselves as they would like to be. When they look at me, they see themselves as they are."
That’s the way it is with Winston.
Some of us, of course, are appalled at the sight, but a great many others like what they see. That certainly would have been the case when they watched the clips from last Sunday’s Q&A replayed on One Network News.
There he was – the people’s champion – saying all the things they had been waiting to hear someone in Parliament say ever since the Ministerial Review of the Foreshore & Seabed Act was released on Wednesday, 2 July 2009.
You certainly have to give Winston credit: not only for the performance itself – which was as good as anything he had ever done in the past – but also for his timing. Since the loss of 2008, he has watched and he has waited. And now, thanks to John Key’s extraordinary political naiveté, the moment for him to make his move has arrived.
Like his namesake, Winston Churchill, he’s been dwelling in the political wilderness – driven from power by his enemies, and deserted by his friends. But on Sunday, sensing a moment of national peril, and with the people's supposed "representatives" all succumbing to "sickly white liberal" appeasement, he stepped forward to demand action.
This is National’s worst nightmare: Winston live on network television; whistling "Dixie" and flashing that trademark grin. Naturally, Messers Farrar, Slater and Hooton will spit and snarl, but, in their Machiavellian heart-of-hearts, they know that Peters is on his way back – with scores to settle.
The big question for the Labour Opposition to answer is: "Do we try to beat him, or join him?"
Phil Goff has a heaven-sent opportunity to re-connect with the constituency Labour turned its back on between 2005 and 2008.
Will he take it – and become Prime Minister? Or, will he bow to his Left, expiate the guilt of 2003-04, and see Labour’s fortunes falter?
Surely he’s not silly enough to cast aside an issue that could rescue his party from endless years on the Opposition benches? Surely he won’t forgo the opportunity to join forces with the man who can shatter National’s grip on provincial New Zealand? Or spurn a coalition partner capable of electorally eclipsing both the Greens and the Maori Party?
It’s a no-brainer Phil.
Prove to us you’ve got the balls to do what all leaders must do, one way or the other.
See power lying in the gutter – and pick it up.
It's all pure W.B. Yeats, boys and girls. The words of The Second Coming need only the slightest tweaking:
… somewhere, in bowells of TVNZ
A body in a Saville Row suit with a head of steel-grey hair,
His gaze blank and pitiless as the TV lights,
Is flossing his bright white teeth, while all around him
Flit the shadows of indignant Gallery journalists.
The darkness drops again; but now we know
That eight months of stony silence
Were broken by a Ministerial Review,
And what svelte beast, his hour come round again,
Slouches toward Wellington to be reborn?
Posted by Chris Trotter at 15:09

In late November 2003, NZ First posted out a revolting leaflet entitled "Whose Country is it?"

Above the signature of Mr Peters, it includes the offensive statement "New Zealand is now a soft touch for illegal immigrants,bogus refugees and asylum seekers. Imported crime levels are soaring and so are the number of Third World diseases such as Tuberculosis and HIV/Aids."

Centre-right bloggers are not the only people glad to see NZ First gone from parliament.

Chris, it is bad enough you inflict your own poetry on us from time to time. But please leave Yeats alone.

Well spotted Chris,
Pariahs only come to the forefront when the conventional wisdoms cease to apply. I would maintain that Winston was the victim of a deliberate strategy by the Nats and their friends in the media to isolate and marginalise him. Journalists did not want to carry any valid content in the stories, only their masters opinions, confirming Galbraiths quip upon the relationship between an employees paypacket and his masters opinion. I dont share Winstons politics but I do miss the colour he brings and his fearless approach to corporate misconduct. It would be nice to see him return vindicted.

This is the classic dead frog. Peters has never been popular to the Labour Party. He campaigned like a lefty in 1996 and backed the nats. He was almost put to death in 1999. In 2002 it was an unusual situation. In 2005 Labour had the choice of Peters and Dunne or Turia and the Greens. If only the Greens did a bit better ...

Labour members would be more than happy with a Green coalition. If only the numbers would support this ...

Mr Trotter, your commentary is always a pleasure to read, whether or not I agree with you.

Here, I think you are dead wrong. People generally have had a guts full of Winston Peters. Unlike his namesake, Peters has been fatally flawed by Owen Glenn who exposed him as a lying, lazy, dishonest and venal bullshitter.

The NACTionalMP government has a good two years and a bit to neutralise any issue this brown arsed charlatan might choose to exploit. He's gone, alright. Our peurile media need to get used to it. Peters could survive when things were good but there's no place for comedians during a recession.

Anyway, Goff wouldn't have the nerve to stand dealing with Peters. Arafat was easier.

It is in the environment of fear, anxiety and resentment, typically produced by economic recession, that the political charlatan truly comes into his own.

Whistle in the dark all you wish, but Winston - or somebody like him - is on his way to Wellington (with scores to settle).

Mt Trotsky, it's Fiinkensein, if you don't mind.

It would be a delight to see Mrs Farrar, Slater and Hootten get their dues. If Winnie were to deliver so much the sweeter. Regardless of his politics I will always respect his stance against corporate fraud aka Winebox.

More importantly Chris, how do we get Labour to abandon the politics of identity? Its too important to be left to chance.

My apologies, Mr Fiinkensein. Struggling with the flu at this end - with varying success, as you can see.

Yes you are correct for once Chris, people like Winston, people will vote for him, and especially if a sickling Government is going to introduce as the first country in the world a sell out of public ownership of foreshore.

"Above the signature of Mr Peters, it includes the offensive statement "New Zealand is now a soft touch for illegal immigrants,bogus refugees and asylum seekers. Imported crime levels are soaring and so are the number of Third World diseases such as Tuberculosis and HIV/Aids."

What's offensive, Rodney, is your refusal to see the truth of that statement (never mind who made it). And it's true not just for New Zealand, but the whole Western world.