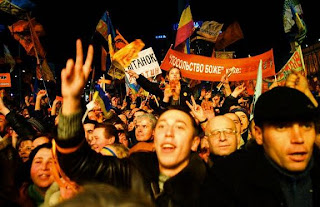 Just pawns in their game: Ukrainie's "Orange" revolutionaries march through Kiev to the beat of drums and drummers manufactured in and trained by the USA. So-called "people's power" is seldom what it seems. Calls by the Niuean premier and blogger Idiot Savant for the Fijian people to "rise up", if not part of a similar deception instigated by Canberra and Wellington, are likely to end in tragedy.
RESPONDING to the call by the Niuean premier, Toke Talagi, that the people of Fiji should "rise up" against the government of Commodore Frank Bainimarama, Idiot Savant of the "No Right Turn" blogsite writes:
"[I]t’s a good idea. From the Philippines to Serbia to the Ukraine, mass non-violent public protest has been a very successful tactic in evicting undemocratic, dictatorial regimes. If Fijians want their democracy back, taking to the streets and refusing to move is probably the best way to do it."
Really?
If Idiot Savant had taken the time to properly investigate the examples of "people power" cited in his posting, he would have discovered that what the world thought was happening – ordinary people heroically "rising up" against a hated regime – was very different from what was actually taking place.
In every case, the events on the street masked a much more subtle political game being played out by individuals and groups either directly, or indirectly, beholden to the United States.
While the Philippines president, Ferdinand Marcos, remained a valued "asset" of the US military, the CIA and the State Department, no amount of "people power" would have been permitted to dislodge him. Following the very public assassination of Ninoy Aquino, however, the US (Aquino’s protector) decided that Marcos's usefulness had come to an end, and that US interests would be best served by replacing him with someone possessing a more credible claim to democratic legitimacy. Accordingly, the word was spread – through the Filipino security forces, the Catholic Church, the US-aligned trade unions and the news media – that Marcos would have to go.
In an attempt to hold on to power, Marcos called a snap presidential election, which he then, very clumsily, attempted to steal. Cory Aquino, Ninoy’s widow, backed by the Americans, was told that she had lost the election. Her response was to call upon the people to demonstrate their support. When Marcos attempted to suppress the demonstrations, key military commanders based in or near the capital mutinied. As it became clear that the police, the army, and the notorious death squads responsible for the murder of hundreds of Marcos’s opponents, were not going to stop them, millions of people poured onto the streets of Manila in a mass outpouring of opposition to the detested regime. Inevitably, Marcos was forced to "concede" the election to Aquino.
The more-or-less bloodless "regime-change" effected in the Philippines became the template for other US interventions – most notably in Serbia, the Ukraine and Georgia. In the case of the "colour revolutions" (so called because the demonstrators took to wearing a single, identifying colour: "Rose" in Georgia, "Orange" in the Ukraine) what appeared to be spontaneous popular uprisings were in fact carefully planned and flawlessly executed political mobilisations engineered by individuals and groups expertly trained and lavishly funded by the United States.
The artificiality and hollowness of these colour revolts is exposed by the fact that none of them produced the sort of significant and broadly uplifting social and economic changes that would have indicated a genuine revolution, but merely a reshuffling of the political elites at the summit of the state – elites who turned out to be, in every case, strong supporters of US policy, and Western interests generally.
Which is not to say that the individuals brought down by these US-inspired uprisings didn’t deserve to be toppled from power. Nor that by acting corruptly, attempting to steal elections and even asassinating (or, in the case of the Ukraine, trying to assassinate) their political rivals, they didn’t themselves contribute the final straws that broke the camel’s back. All I’m suggesting is that the people who poured onto the streets turned out to be pawns in a game they did not control, and whose ultimate instigators were never revealed.
Now it is just possible that something akin to the US colour revolutions is either being planned by the Australian and New Zealand governments, or has already been set in motion. Like the Filipino military commanders, senior Fijian military and police officers may already be preparing to lead a mutiny against Commodore Bainimarama. The harassed and harried Fijian news media may already be primed to provide their readers, listeners and viewers with helpful insurrectionary instructions. The Great Council of Chiefs may already have been bought and sold and bought and sold. And the sexist, racist and homophobic Fijian Methodist Church may already be poised to give yet another coup-d’étât its blessing. If so, "taking to the streets" will prove to be a surprisingly effective tactic – but not a revolution.
Nor, almost certainly, will it be good news for the Indo-Fijians still living in Fiji. On the basis of historical precedent, they can expect to be beaten up, raped – even murdered – and to see their homes and businesses broken into, looted and torched by out-of-control gangs of "revolutionary" indigenous Fijians.
On the other hand, Kevin Rudd and John Key may be genuine in their expressions of alarm at the Niuean premier’s suggestion. And they are absolutely right to be worried. Because, if there is no fake revolution planned, and the police and soldiers haven’t been suborned, and the long-suffering Fijians do follow Talagi’s and Idiot Savant’s advice and "take to the streets", the Commodore’s men will crush them like bugs.
But then, those who cry "Let justice be done, though the heavens fall!", are almost never the ones who have to live among the ruins.
Idiot Savant? Well, he’s half right.
Posted by Chris Trotter at 11:08

I thought this insightful post would provoke a storm of comments, perhaps it has just not been noticed yet.

I read your blog because I find your insight perceptive. And yet they mask some prejudices. I have crossed swords with I/S in the past and it was always easy to descend to the easy jibe from his online name. I tried to forswear that some time ago.

"The blogosphere tends to be a very noisy, and all-too-often a very abusive, place. I intend Bowalley Road to be a much quieter, and certainly a more respectful, place."

Whilst your header & closing jibe is slightly subtle it diminishes an otherwise excellent piece.

You obviously deign to ignore the manipulations of the soviet union and the original marxist revolutions as being in conflict with your theme of denigrating the US.

I was in Romania a few weeks ago. The money from the European Union has wrought enormous change, yet some peasant farmers still use the scythe whilst others burn wood in enormous smoking heaps for 2 weeks at a time to create charcoal for the garage forecourts of germany.

"none of them produced the sort of significant and broadly uplifting social and economic changes that would have indicated a genuine revolution, but merely a reshuffling of the political elites at the summit of the state"
I sense you yearn for a purist view of revolution. Would you prefer Mao's great leap forward and the execution of intellectuals?

Do you prefer the corruption and drift of Pakistan under democracy to the stability of Musharraf, or would those put you in the camp of never having to live in the ruins.

I will take positive change any way I can get it. A few of the right bloggers seem to recognise that Bainarama may bring positive change with an election and strengthened civil institutions. Overzealous police officers will kill and maim people from Britain to Fiji.

The funny thing about people going out into the streets is that they all have to make a choice, whether you determine they are being manipulated or not. Not enough Iranians made a choice that they cared enough about the rigged election to go out and bring down the government. In doing so they made a choice that legitimised it.

Point taken, Phil. But I hope my blog is robust enough to withstand the odd bit of sledging - always providing it is done with humour and just a touch of ambiguity (attributes distinctly lacking from I/S's own commentaries, I might add).

Phil, I dont really see any difference between "popular" uprisings supported ex Washington and those ex "Moscow" or elsewhere. The common thread is that the purported goals seem to have been bypassed. I had the same feeling in 1984, we all wanted rid of Muldoon. The end result was we got shot if him but ended up with an equally facile and malevolent regime. The problem may be with us, we really only knew what we did not want at the time. Is that also the common thread in the failure of these uprisings to bring change?

Nick - you make a good point. I dont see any difference either. I was seeking to point out to Chris that human choice does come into it and there really is little difference bettwen a populist uprising against a feudal state or an autocracy previously backed by the US. With tongue only partly in cheek you would agree that the practical impact of the Bush doctrine is to aim at genuine democracy rather than governments of the at least he is our sonofabitch kind

Phil, if I wasnt so cynical (born from hard experience) I might agree. My take on the Bush doctrine is that the emperor has no clothes. I really saw very little difference between democracy in the US and the former USSR, in both cases it was/is the preserve of a priveleged minority, and gave little choice in candidate or outcome. With the Bush doctrine the same beneficiaries attempt the same result.