This Week Ten Years Ago: "Survival of the Fittest" 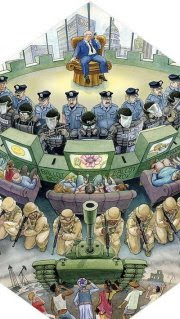 Capitalism for beginners: Social Darwinism, the pseudo-scientific justification for 19th Century laissez-faire capitalism, has been superceded by its 21st Century offspring - Sociobiology.
PERHAPS you’ve been wondering how it is that so many of this country’s high-flying chief executives can get things so incredibly wrong. Why they can’t seem to predict the negative public response to such triumphs of managerial excellence as Electricorp’s decision to transport a string quartet half way up a mountainside for the entertainment of its champagne-swilling clients, or WINZ’s folly in flying 100 senior executives on chartered jets to a luxury resort outside Taupo? Most of us would react against such profligacy instinctively. A string quartet for a daughter’s wedding – maybe. A weekend at a luxury resort to celebrate your 10th wedding anniversary – sure. These are luxuries; special treats to be paid for out of our own pockets - not somebody else’s!
The explanation for the reckless behaviour of the business and public service élite is, I regret to say, a profoundly depressing - and very dangerous - one. Since the rise of what might be called "yuppie culture" in the 1980s, there has been an extraordinary resurgence of Social Darwinism throughout the upper echelons of Western society – especially in the English-speaking countries. Except that these days it isn’t called Social Darwinism, these days it goes by the name of "socio-" or even "evolutionary-" "biology". Books like Richard Dawkins’ The Selfish Gene postulate a world in which aggression and competitiveness are hardwired into our brain stems. Where the relationships between men and men, men and women, and adults and children, are calculating, exploitative, and profoundly unequal. A universe in which only losers bleat on about justice, compassion, and social solidarity.
These pernicious sociological falsehoods have percolated through all the layers of advanced capitalist societies - to the point of influencing popular culture. How often, for example, have you heard a man joking about wanting to "share his genes" with some particularly shapely young woman? Or read articles in the glossy women’s magazines extolling the "natural" attractiveness of "rich and successful" males?
The political purpose of sociobiology is as plain as that of the equally self-serving theory of the divine right of kings – to re-cast the predatory impulses of the ruling class as innocent manifestations of the "natural order of things". Just as the "Robber Barons" of late 19th century America explained the squalor and privation of their employees as the result of "natural selection", the sociobiologists accept the widening gulf between rich and poor as an inescapable by-product of the relentless pursuit of superior genetic material. It may sound like science, but its effect is purely political. Racism, sexism, homophobia, all the social evils we thought we had conquered, at least in the realm of the intellect, sneak quietly through the back door of sociobiological theory.
Now imagine the psychological effect of this theory on those who find themselves at the top of our economic, administrative and political institutions. In a world governed by the logic of tooth and claw (not to mention the ability to attract the patronage of "alpha males") they have fought their way to the summit. Their genes have triumphed over all their rivals in the cut-throat competition of the evolutionary playground. The men and women beneath them are not merely unlucky – they are inferior. To be a Chief Executive is not simply a matter of being first among equals – you’re the MAN! The victor! And to the victors go the spoils.
So you see, to the élite there is nothing really wrong with pigging out at the public’s expense. After all, what is "the public" but the discarded residue of the struggle for dominance, the worthless detritus of repeated genetic collisions? To the élite, "the public" is just another euphemism for "the losers".
This essay was originally published in The Dominion of Friday, 13 August 1999.
Posted by Chris Trotter at 17:37

Richard Dawkins is a social democrat, and you would benefit from reading some David Hume on is/ought.

Granted Tom, Dawkins is a brilliant scientist and communicator, and does, indeed, subscribe to progressive ideas. But much the same could be said of Charles Darwin (who was, for example, a life-long abolitionist). The personal qualities of both men have not, however, prevented the Right from appropriating their ideas and turning them to their own purposes.

Still, you're right, I should have made the distinction between Dawkins the man, and what we might call "Social Dawkins-ism" much clearer in the column I wrote ten year's ago.

Fair enough. I suspect that striking that difference with more clarity would perhaps be a better way of shutting down psuedo-scientific bases for policy like those you mention. It's worth remembering that the same approach was tried by far-left figures as well - Kropotkin springs to mind.

The problem with Social Darwinism isn't so much that rests on a misunderstanding or warping of evolutionary ideas, but that it errs in thinking that things should be in politics as they are in nature. That, I think, is the real mistake made, and I worry that you are also suscpetible to it (or at least, were ten years ago!).

I vaguely recall the "is/ought" problem from my days at Otago University.

If anyone's guilty of confusing the two it's the Right.

Even so, I've never been a big fan of "Hume's guillotine".

The sort of people referred to in this piece do not care in the least about fact to value inferences, or even whether their take on sociobiology or Darwinism has any basis in fact. Thay simply want to valorise selfishness because that is what they are good at. Incidentally, in the Selfish Gene, Dawkins claims that animal colonies that come to be dominated by the selfish tend to self-destruct. One can go the long way about taking an inference from this: if animal colonies are relevantly analogous to human societies, and if we do not want our societies to self destruct, then perhaps we should not encourage selfishness. Mrs Thatcher, who did not agree that there was any such thing as society, could accept all this and still endorse selfishness.

Never mind Dawkins, the best description and analysis of this type of behavoir comes from Thorstein Veblen, very funny it is too. Good comment Olwyn, Thatcher famously released the mentaly ill into "community care", then promptly stated that there was no community, only individuals.

How appropriate that you would republish this column as Obama struggles to reform the ultamite extension of Social Darwinism: The American health care system.

A good article , Chris, and well worth re-running.

Unlike many of his followers, Dawkins does distinguish between his Darwinian 'is' and his humanistic 'ought', albeit that I've never been sure about the philosophic basis of his humanism.

I assume that the illustration is an update of the famous turn-of-the-last-century "We rule you, we fool you" etc. poster . It is similarly effective and descriptive.

Instead she saw neo-liberalism as a tool for "putting the 'Great' back in 'Britain'" ,
ignoring the vast reserves of social capital that kept the UK a relatively stable and harmonious society (even in the fractious 70s).

The result, of course, was a society singularly devoid of the 'Victorian Values' that Thatcher claimed to cherish. Watch any British reality TV show for evidence thereof.