The Impudence To Distort 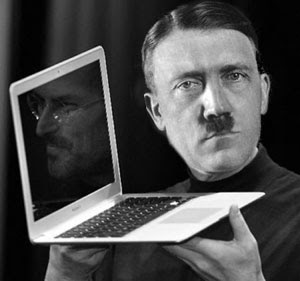 And you thought he was dead: The corosive cynicism and ruthless amorality of modern propaganda techniques (a.k.a public relations) is Adolf Hitler's most enduring legacy.
ADOLF HITLER may have been the most evil man that ever lived – but he wasn’t stupid. In the years immediately following the First World War he devoted a great deal of time to fathoming the reasons for Germany’s defeat. Among the most important contributing factors, he quite rightly identified the clear superiority of Allied (especially British) propaganda.
We still have difficulty, even now, 95 years after the outbreak of the Great War, in separating the historical reality of the Anglo-German conflict, from the almost entirely contrived version of events handed down to us by the propagandists of our own side.
According to Hitler’s stern critique, Germany’s propagandists were far too cerebral, and far too enamoured with the truth. The British propagandists were better, he said, because they directed their messages at the stupidest – not the smartest – of their people, and because they were willing to tell such shocking lies about their enemies.
While serving a five year prison sentence for insurrection, Hitler reflected on the essentials of effective propaganda:
"The receptivity of the great masses is very limited, their intelligence is small, but their power of forgetting is enormous. In consequence of these facts, all effective propaganda must be limited to a very few points and must harp on these in slogans until the last member of the public understands what you want him to understand by your slogan. As soon as you sacrifice this slogan and try to be many-sided, the effect will piddle away, for the crowd can neither digest nor retain the material offered. In this way the result is weakened and in the end entirely cancelled out."
Of course Adolf Hitler wasn’t the only person ruminating on how to produce effective propaganda in the 1920s. Across the Atlantic, in New York City, the founder of the modern "science" of public relations, Edward Bernays, had arrived at very similar conclusions to those of the banged-up leader of the Nazi Party.
But, Bernays had two very big advantages over Hitler. First, he had actually been one of the Allies’ leading propagandists during the war; and second, he was the nephew of the founder of psychotherapy, Sigmund Freud. It was Uncle Ziggy’s professional lock on Western Society’s subconscious motivations that gave his nephew’s propaganda campaigns their special edge. By contrast, Hitler’s understanding of what made good propaganda was wholly intuitive. In the final analysis, however, it made little difference. Be it the work of Aryan superman, or Jewish huckster, the end product looked very much the same.
Why do we need to know all this? Because the techniques pioneered by Britain’s war propagandists, Hitler’s Nazis, and Bernays’ "science" of public relations haven’t really changed all that much in 80 years.
Politicians and big corporations still disseminate the most shocking falsehoods to capture the attention of their audience/market. And the endless reiteration of simplistic slogans, directed at the stupidest – not the smartest – citizens/consumers, remains the surest way to imprint their thoughts upon our brains.
On this, Hitler’s intuitions were spot-on.
"Only constant repetition will finally succeed in imprinting an idea on the memory of a crowd."
And, when you lie, tell big lies. Because it would never enter the heads of the "broad masses" to "fabricate colossal untruths and they would not believe that others could have the impudence to distort the truth so infamously."
And, above all, never equivocate.
Absolute certainty, says Hitler, is the "very first condition which has to be fulfilled in every kind of propaganda: a systematically one-sided attitude towards every problem that has to be dealt with … When they see an uncompromising onslaught against an adversary, the people have at all times taken this as proof that right is on the side of the active aggressor; but if the aggressor should go only halfway and fail to push home his success … the people will look upon this as a sign that he is uncertain of the justice of his own cause."
The legacy of this master propagandist is everywhere around us.
The Big Lie: "Climate Change is a Hoax"; "Globalisation has lifted millions out of poverty".
Constant Repetition: "John Key has a secret agenda."
The Systematically One-Sided Attitude: "ACC is bankrupt. It’s all Labour’s fault. Only massive levy increases and a reduction in entitlements can fix it."
And you thought Hitler was dead.
This essay was originally published in The Dominion Post, The Timaru Herald, The Taranaki Daily News, The Otago Daily Times and The Greymouth Evening Star of Friday, 16 October 2009.
Posted by Chris Trotter at 09:30

Excellent article of yours that I read in The Timaru Herald this morning. It was just what I was looking for as a lead in to a letter I've been wanting to right to Letters to Editor. If my letter was ever going to stand a chance of be published, then it was now, thanks to you Chris.

Chris Trotter’s article 16/10 certainly struck a few chords. As he stated “propaganda hasn’t changed much in eighty years" If you tell the masses something often enough and long enough, they will believe it.

Reuters news reported last month that VeriChip Corp shares rose 186% after the company announced it had been granted an exclusive license to patent their swine flu pandemic detecting mini-microchip for the purpose of human implantation. With these chips the spread of a pandemic can only be remotely detected if a large amount or the entire population have them, reports VeriChip.

How fortunate for VeriChip that the media have hyped H1N1 up to fever pitch as well as WHO upgrading this influenza strain phase six pandemic level. How fortunate for politicians also. Governments are well aware that the masses would baulk at being micro chipped, however with enough fear induced reporting from health authorities and/or the media the masses may accept illogical measures during a scare and willingly have a VeriChip radio frequency identification device implanted.


It may sound insane at present; however those purchasing VeriChip shares certainly don’t think so, or perhaps they are privy to something we are not.

When microchipping dogs was mooted, I had a very brief letter published in the NZ Herald on the subject. It was basically along the lines that the first tax in New Zealand was a tax on dogs. A Maori Chief in Northland remarked at the time: tax dogs today, people tomorrow! My closing line was simply that dogs have a lot to answer for.

Your public library has a wealth of literature on globalisation, your nearest university library will have even more.

For an excellent local start on the Internet, visit the Arena website. http://www.arena.org.nz/